HE THAT IS WITHOUT SIN AMONG THEE – by Capt Elmo Jayawardena 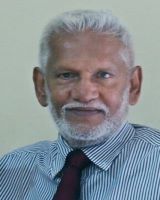 Let me start by writing what I perceive somewhat as the truth. The last thing anyone knows in Sri Lanka is the truth. It has always been in masquerade as long as I can remember. I have to trigger this parody at the Rogues’ Gallery in Diyawanna Oya. Of course, this is a generalized version as we must admit there are some among the 225 who are honest leaders. The fact remains they are the minority and could be even a microscopic minority. ‘He that is without sin among thee, let him cast the first stone’. I wonder who can honestly bend down and pick up a rock and throw at those who steal? 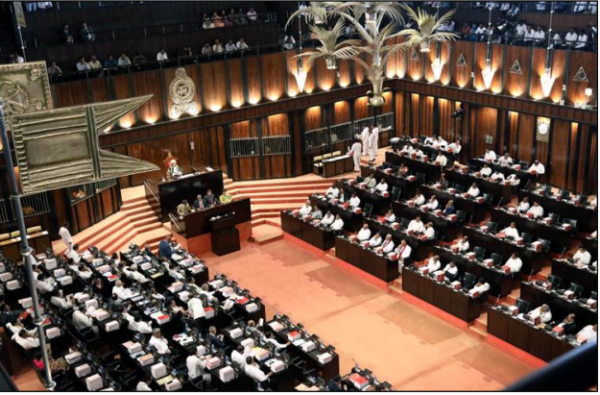 They arrive in their SUVs, Mercs and BMWs and enter the power pavilion in Kotte full of pomp and pageantry to take their chosen seats. The lambasting starts there, a shameless and aimless shouting match at each other throwing bag loads of insults. The leadership looks more like spoilt little children fighting for ‘seenibola’ and the speaker (I’d better be careful here) appears more like a substitute teacher in an unruly classroom. They vote as they are told to vote and oppose as they are forced to oppose, controlled by a special breed of puppeteer godfathers to whom they owe their seats.

That is our democracy. Deal-laden and conscience-pawned and integrity blowing in the wind. That is our Diyawanna Oya leadership who navigate our one and only paradisiacal homeland to the heavens of their self-created commission-driven imaginations. Here I must once again categorically state that all the apples in the barrel are not rotten, but how do we find the good ones? That part of the equation is getting harder by the day. Yes, I repeat myself and say there are the honest ones too in the barrel. They in sincerity know who they are, and so will we at the rate we are rising from our bended knees to open Pandora’s boxes and spread our anger like wildfire.

But we must not forget ‘that the Jury passing on the prisoner’s life, may in the sworn twelve have a thief or two, guiltier than him they try?’ So said the Bard in his William Wisdom.

The old man walked from his little village, 7 km from Ampara, holding his 5-year-old grandson’s hand. Herath Mudiyanselage Piyadasa is a cultivator, and the little boy Viranga is a pre-school student in the village temple. They were taking a bus from the east coast to the west coast across the island. They were coming to the Galle Face ‘Gota-go-Gama’ to protest.

“Breathes there a man whose soul so dead,

Who never to himself has said,

This is my country, my native land”.

It reminded me of the old Chinese man in Tiananmen Square. The one who defiantly stood with his two plastic shopping bags in the path of a battle tank coming to disperse a crowd. The tank veered right to avoid the obstructing solitary man. The protester moved too, to continue his obstruction and block the tank’s path.

The old Chinaman making history on Tiananmen Square has had enough. So has Herath Mudiyanselage Piyadasa.

The SUVs, the Mercs and the BMWs move around town to hurriedly-convened meetings that have been taking place daily for the last three weeks. Souls are being sold and principles pawned whilst the leaders gather, some in secret behind barricades and some in the open to showcase. Either way they are talking constitutional nonsense whilst armour-plating their backsides. The other side of the coin is the misery of the masses.  It has come down to the parents skipping meals to feed their children till Santa Claus returns with the goodies from IMF.  Strange that they could not find an economist to be the finance minister. But then, the legal eagle we have now is spherically better than the seven-brained Kakiyan we had. 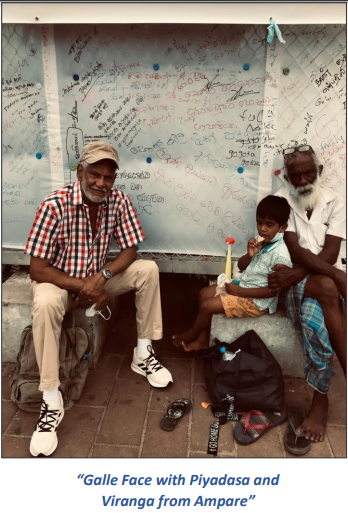 I was seated by the road near the MOD junction and watching the protesters passing by. Everything was orderly and cleanliness was at its zenith. There was a vibrant energy which is hard to explain. I clearly noticed 90% of the crowd were young. No, they were not there for the fun and frolic. They had come to protest. I too was there for the same reason. My generation ruined Sri Lanka gullibly tolerating the tyranny that came from Diyawanna Oya. The younger generation is different. They want to be heard and they want to be counted and that is what they are fighting for. I sighed at the sadness of it all and wished them the best of blessings. They have taken over the battle where my generation had failed.

The old man and the little boy stood and looked and hesitantly sat next to me on the concrete. He was clad in a blue sarong and a loose white shirt and the boy in typical kid’s clothes. A few minutes later the old man leaned against the fence and fell asleep. He must have been very tired. The boy opened a ‘siri-siri’ bag and took out a small plastic packet of some chips. He carefully opened it and was about to eat when he saw me looking at him.

I took a piece. I think it was manioc. We both completed the first round.

“Seeya, thava ekak? (Seeya, you want another one?)

I took that too. The generosity of that little boy sharing his precious manioc chips with an old stoical bastard like me hit me hard.  I am not sure whether there were tears in my eyes, but I sure have them now while I relate this story.

The whole of Galle Face was protesting against the greed of our leaders. The old man was fast asleep, and the little boy was sharing his chips with another old man. That is my Sri Lanka, that is what we have lost thanks to the scrooges that loiter in Diyawanna Oya. 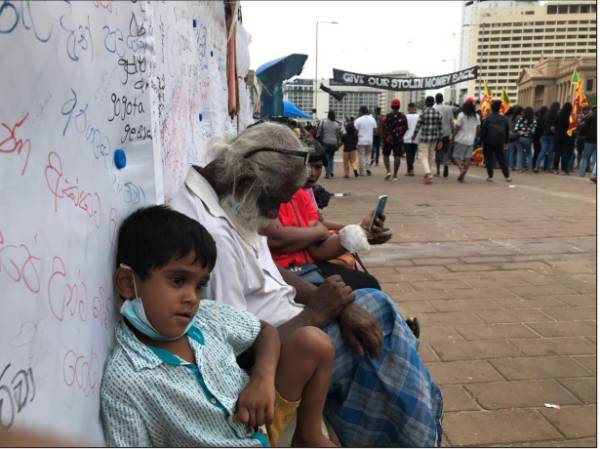 “The sleeping old man and the little boy”

Now they are talking about how to share the melon. Christopher Okigbo, the Biafran poet, wrote ‘Hurrah for Thunder”. You can Google it. It fits our current situation in Sri Lanka perfectly. See what the comedy is about? Sri Lankans are protesting all over the world with ‘Gota go Home’ chants. The pedigreed lot of the parliament seems to be having other ideas. The whispers are getting louder for the PM to step down. The Green Man is even thinking that he is the only clown who is capable of redeeming the country as Prime Minister in an interim government. Of course, there will be some who are ready to change colours and make unbelievable deals under the table to get into the band wagon. So we have a constitutional crisis – it could be an excellent platform to “send in the clowns”. But then, as Sinatra sang, “where are the clowns? Don’t bother, they are here.”

The old man awoke, and we got talking. He was 65 years of age, a decade younger than me. Toiling in the sun, working in the Ampara heat must have aged him. He was withered like an old gnarled tree. I told him how his grandson shared his manioc chips with me.

“We may not have much Sir, but we know how to share.”

I asked Piyadasa why he came such a long distance to protest.

“Sir, my cultivation was wiped out, no fertilizer, it was very difficult for us to live. If I did not come to protest, I would have lost who I was”, he finished with a fading voice that came from somewhere deep within.

We spoke a lot more and he explained in simple farmer words the crisis of the fertilizer and how the poor cultivators suffered.  I just could not understand the stubbornness of power that had ruined seasonal crops for the ego of one man.

The three of us walked to get an ice cream. Little Viranga had been very generous with me with his manioc chips. I bought him a national flag to even the score.

“He wanted a flag from the time we got off the bus.”

I took my leave from the old man and the little boy, a fond farewell with meaningful memories to last, perhaps a lifetime. We exchanged telephone numbers and I promised to get in touch with them. I certainly will.  They crossed the road and walked in the opposite direction amidst the continuous cacophony of “Gota Go Home” and the blaring horns of cars and motor cycles that rhymed ‘Kaputu Kaak, Kaak, Kaak.’

The little boy looked back at me and waved his national flag. This is his beloved country, this is his limited life, I hope they will be kind to him.

A fading sun was coloring the western sky with tangerine and vermilion.

The sight matched my mood and I found myself whistling ‘Send in the Clowns’ as I crawled my way out from the Galle Face.