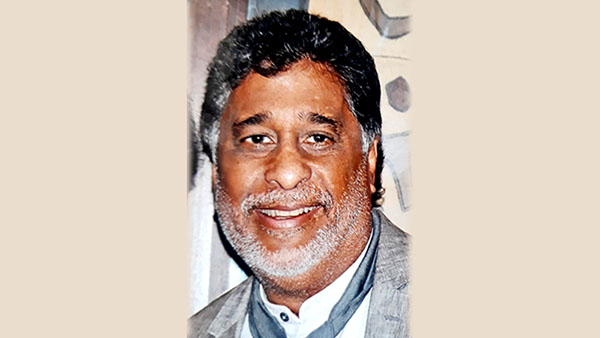 Trinity College, Kandy is one of the premier schools in the country which has contributed immensely in producing several quality players in the field of sports. Harindra Gunasekera was one of the yesteryear players who became cynosure of all eyes at school, club and at International level in rugby.

Harindra Gunasekera had a nickname called ‘Bogah’ in sporting circles. His father was Tudor Gunasekera and Mother Nimali. His father was an owner of coconut and rubber estates in Katunayake / Kadirana area in Negombo, and was a very prominent figure in that area. He has one elder brother Nihal who also attended Trinity College but left for England at theage of 20. He is now back in Sri Lanka after 35 years.

His younger sister Roshan, who attended Ladies College, Colombo also represented Sri Lanka in swimming in 1973 and 1974. Bogah was housed at the College hostel along with several other

students, where most of them were involved in sports in that era. Many of them opted to take up rugby due the influence and the encouragement of Hilary Abeyratne, whom he rates as their mentor in the oval shaped ball game, who held dual position as the Master in Charge of Rugby and Vice Principal, who was instrumental in producing several top class ruggerites from Trinity. Coinciding his role in the administration, he was the junior rugby coach for them in the under-15 and 17 age category. He is the uncle of former Sri Lankan rugby legend Ajith Abeyratne.

Bogah enrolled at College as a primary class student in 1957 and went on to study until 1969. His illustrious rugby career started by engaging in under-15 and 17 teams, where they held a unique record by remaining the undefeated team in these age groups. He played in the pack as a hooker and was a member of the 1969 College team which remained unofficial unbeaten school Champions. He played for outstation schools team and as a result was selected to play for the Combined schools team in 1969. One year later, he left school and joined CH and FC and went on to lock horns for them until 1976. He led them in1975 while being a regular member of the ‘Pink Elephants’ social rugby side at that time. Due to less number of International competitions, he was selected to play for the SLRFU President’s XV side against many visiting overseas teams from 1971 to 1974, including the London Welsh, Paris Universities, Blackheath, Hastings and Bexhill. At his peak he was chosen to represent the 1974 Rugby Asiad team held in Colombo.

a big tribute to late Maj.Gen.Denzil Kobbekaduwa, their school coach.

At the age of 18 years, Bogah was invited to play for CH, the one and only club where he showed his loyalty during his club career. He made his debut under Maurice Marinnon which team consisted of John Burrows, David McCall, Bryan Baptist, Lucky Chickera, Lorensz Pereira, Tony Amit, Omar Sheriff, Hamza, Hamdoon brothers Faiz and Refai, Keith Wambeck, Darrel Wimalaratne, Rodney Paternott and Horace Perera who were greats players in the game in that era.In 1972 CH were the unbeaten League champions notching up 22 wins before losing to Police in the Clifford Cup final by 9= 12 due to a last minute penalty by Nizam Hajireen The 1971/72 team was coached by Darley Ingleton, who was very particular on player’s fitness. In 1975, he was appointed as the captain of the Maitland Place club, where they had quite a successful season by reaching the semi=finals of the Clifford Cup. With his senior

players having hung up their boots, Bogah had the opportunity of obtaining the services of some youngsters like Brumoon Akbar, Rohan Guneratne, Shiyam Wijesinghe, Ajith de Silva, Cuda Wadugodapitiya, Shaan Chang, Basil Rodrigo, E.L.C.Fernado and Viraj Gunasekera. This team also included some foreigners Bob Dewar from England, Dave Roberts from USA, Rick Walley from Australia in addition to some of the old guards like Rodney Paternott, Tony Amith and Dane Jayawardena, who were regulars in the side, which was coached by Archibald Perera that year.

In 1974, when he was at his peak, he was called for National duty to play in the Rugby Asiad which Lankans lost to Japan by 6-44 in the finals under Indrajith Coomaraswamy’s captaincy, which included Shafie Jainudeen, Hanzil Samad, Lanil Tennekoon, Clifford Elhart and Jeffrey Yu all of them were Trinity Lions. Bryan Baptist, Hafi Abdeen, Jeff de Jong, Omar Sheriff, Jeyer Rodriguesz, Didacus de Almeda, Mahesh Sabaratnam, Reggie Bartholomeusz, Hadji Omar, Gavin Stevens, Dr.Maiya Gunesekera Anton Benedict. M. F .Fernando, Alphonso Rodrigo and G. B. Gunadasa.

He had a sad ending to his rugby career in 1976 by recurring a rugby related shoulder injury followed by his final exams in June that particular year, for which his mother was very concerned. He qualified as a Chartered Accountant and migrated to Zambia for employment opportunities in 1977. He has spent over four decades there based in Lusaka where he worked for Grindlays Bank and Standard Bank of South Africa for 25 years as an expatriate . He still represents few leading Sri Lankan companies there in business and investment ventures.

His wife’s name is Ruanie de S.Wijeyeratne from Colombo and attended St. Bridget’s Convent, Colombo has been a pillar of strength in his life so far. He is blessed with three daughters Tiasha, Tanya and Tara all educated overseas. The two elder daughters are back in Colombo working as

Consultants in the IT Industry while the youngest one is an architect residing in Australia.