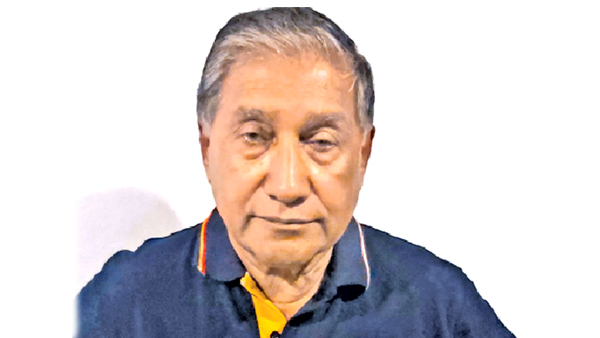 It is very rare to witness a person with a sound academic background prosper in sports in the school’s arena later reaching the pinnacle of that particular game. As a player and administrator holding several posts he still remains as a live wire, contributing immensely for the betterment and the development of the oval shaped ball game to the next level. Japana Jayawardena who was one of the prominent officers attached to the Sri Lanka Army retired as a Brigadier ending a remarkable service over three decades to them both in profession and also as a player and as an administrator bringing honour and fame to Trinity College Army and the country.

He was nicknamed ‘Japana’ and was born in Botale Pahala Walawwa in Ambepussa and his father was Peter Jayawardena, a District Land Officer by profession. Mother was Sila Kulathilaka Senanayake Amarasekara from the late Prime Minister D.S. Senanayake’s Family. His younger sister Malkanthi is overseas and Gamini the younger brother is another Trinitian.

Japana’s academic career was right throughout at Trinity College, Kandy spanning from 1956 to 1966. From his childhood he was very enthusiastic in engaging in sports and went on to play soccer for the school’s team at the under-12 age group since there was no junior rugby(under-12,13) at Trinity those days. Nevertheless, he embarked on his rugby career at school with the under-15 team. . Most of the Trinity boarders indulged in sports. His boarding house prefect Chulika de Silva selected them to play and all of them ended up playing for Sri Lanka. Besides him the others were Glen Vanlangenberg Sunderalingam, Ajith Abeyratne and Gogi Tillekeratne

After playing under-15, he was promoted to play for the school under-17 team which was captained by Prasanna Jayawardena This under 17 rugby team was undefeated and was coached by their vice principal Hilary Abeyratne who was also their house master. Since .M.T.M. Zarook was captain of the first XV rugby team, he could not play for this team. Hence, he moved into playing Hockey for the school. He excelled as a hockey player who went onto score five goals against St.Paul’s College and went onto represent central province in hockey.

Subsequently in 1966, as Zarook left school, he got the opportunity to play as scrum half for the Trinity first XV and paired off with his junior team mate Glen Vanlangenberg who played as fly half. This combination blossomed as an outstanding halves pair which gained national and international recognition.

During the 1966 season Isipathana College beat all Colombo schools and challenged for an unscheduled rugby encounter with Trinity which was played on a week day at Bogambara. Isipathana scored first but they went onto win the match at the end of the day where he was concussed in the latter part of the game which prevented him playing against S,Thomas at Mount Lavinia. His crowning moment came in the first leg of ‘Bradby Shield’ match where he scored a try from a five yards’ scrum . With this try Trinity managed to force a draw and in the return leg beat Royal at Bogambara 12-3 thus winning the Bradby shield in 1966. As a result end of the session he was awarded the first year Lion which was a tremendous achievement . The Bradby shield winning team also had Leslie Jayasekara, Ranjan Siriwardena, Mahendra de Silva, Alex Lazarus Ajith Abeyratne, Sundaralingam, Gogi Tillekeratne GlenVanlangenberg Thalwatte, Rayan Howie Jifffry and Jeerasinghe . After this season in 1966, Glen and him were invited to play for up country against low country clubs. They were also selected along with other players to represent outstation schools against the Colombo schools and went on to play for the Ceylon schools against the Colombo University and Medical College respectively.

In 1967 after leaving school, he along with Glen, Sundaralingam and Gogi T illekeratne came down to Colombo to play for Havelock Sports club except Ajith Abeyratne who opted to join the CR and FC as his father and uncle were members there.

Havelock’s Rugby team comprised Prop Forwards Jeyer Rodriguesz and Tyronne Holden bottle with Cavern Gauder Hooking. Second Row forwards were Royden De Silva and Chelliah. Third row consisted of Noel Brohier as number 8 and Gamini Fernando and Hameed as Wing forwards. He joined Glen as half backs with Jeff and Dan Ratnam as inside three quarters with Henricus and Gogi Tillekeratne being the wing three quarters with full back Maxim Flamer Caldera. Gamini Fernando as Captain highly motivated their team to win the Clifford Cup finals against the Police and the All India tournament which was played in Sri Lanka. Police team was captained by S Sivendran and few others were Sourjah, Wijewardena and Ibrahim Hameed. Abdul Majeed played as wing three quarters along with Bandula. Thirumani was wing forward. Sivendran played as a hooker. Cup final was refereed by Captain Bertie Dias from the Army.

Subsequently, he was selected to represent Sri Lanka from 1968 to 1972 as a regular player for Sri Lanka sharing his position with Tony Sirimanne from CR and FC and Denzil Kobbekaduwa from Kandy Sports Club. He was selected to represent Ceylon team in 1970 in the second Rugby Asiad held in Bangkok. The team was coached by Lieutenant Commander Darley Ingleton. and was captained by Hadji Omar with Y.C. Chang, Bumpy Jayasekara, S.P De Silva, Tony de Sylva, Gogi Tillekeratne, Tyronne Holdenbottle, N P Amaradasa, Glen Vanlangenberg Jeff Ratnam, Mike de Alwis as Hooker, John Burrows, and Sari de Sylva, Kamal Ratnapala, and Abeywardena.

After completion of this tour he joined the Sri Lanka Army as officer Cadet and went onto represent Defence services. Brigadier Ramanayake who was in charge of Army sports was instrumental in him joining the Sri Lanka Army. Though he was short in stature, he was taken to Army by Commander General Sepala Attygalle who encouraged him

After calling it a day as a rugby player, he went onto take over coaching and become involved in rugby administration. He served at Sri Lanka Rugby Union(SLRFU) in various positions including as a committee member, Secretary, Vice President, and ended up as Chairman of SLRFU. After serving as head of Rugby union, he was elected as President of Referees’ Society.

Subsequently he was appointed as chairman of the national selection committee and was instrumental in introducing women’s rugby to the Sri Lanka army as regiment commander of the Sri Lanka army women’s corps. He was a founder member of referees’ society currently functioning in central province while serving Army in Anuradhapura, he introduced rugby to North Central Province with help of then Majors’ Sunil Ranasinghe, Chandrasekara,

Keerthi Ekanayake, and M S Zainudeen admin secretary of Sri Lanka rugby football union. He also served in the disciplinary committee of the Sri Lanka rugby and currently he is in the appeal board. He qualified as level two World Rugby coach and appeared for educator courses. He was appointed as Chairman of Sri Lanka Rugby foundation by the newly appointed Sri Lanka rugby council this year. He was fortunate to serve rugby as a National player, Chairman of Rugby Union, Chairman of Referees society, as a National Selector, served as an appeal board member while surging ahead as head of rugby foundation nominated by Rizly Illyas, President, SLR. He would like to thank General Dennis Perera and successive Army commanders who helped him in his rugby career.

He is married to Krishanthi Rodrigo, an attorney at law by profession and has one son Kushan who is working at an Investment Bank in London married to Susan with two kids.