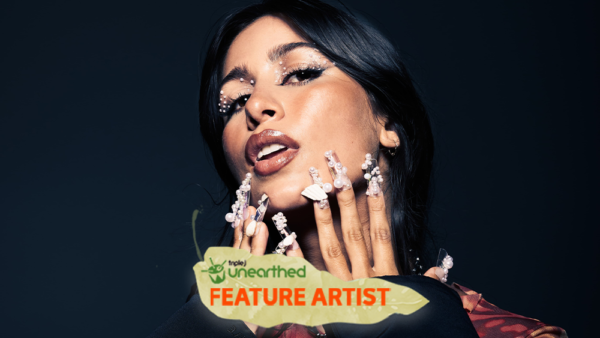 Both on the decks and in her day-to-day, this week’s Feature Artist is an expert multi-tasker.

Surusinghe is the Eora/Sydney born and now-London based artist who splits her time between being the ultimate music industry slashie and one of the country’s most exciting, genre-blending producers.

From a self-described “door b*tch” at gigs and festivals, to working in various Australian touring companies, to being poached and moving to London, Surusinghe’s industry experience is vast and she says it helped her when pursuing music-making herself:

“Being on the other side has helped me free the kind of artist I want to be, the expectations I have of the industry and where I should sit.”

It was also working in the promoting, labels, management and more that led to Surusinghe recognising a severe lack of diversity in music, and she decided to be the representation she wished to see.

“When I first started working in music, from where I am now, it’s a whole other industry. The only other reason I started DJing in the first place is because there was literally not a single female booked on a lineup.

“I know there are a lot more female DJs out there, but I think there’s still a long way to go and we need to continue to diversify the industry in any way we can.”

Not only is Surusinghe a jack of all trades in her music industry jobs, she also applies the same mentality to her music, experimenting with footwork, jungle, breakout and techno. When asked to describe her unique sound herself, Surusinghe said that tracks she produces are “bass-y, percussive hybrids with Asian influence. Those are my key buzzwords!”

The Asian influence mentioned is largely reflective of the inspiration Surusinghe draws from her late father. An “incredible musician”, she says her dad “showed me how to love music and how to appreciate it.”

“A lot of these references are taken from my Sri Lankan father who has passed away. It was about the sounds that I heard in my house when he was alive. I think it’s me trying to draw another connection to him and to feel close to that side of him and that side of my life.”

As well as connecting with her father via the sounds heard in her house growing up, Surusinghe also wants to create “fast, high-energy tracks” that resonate with those on the dancefloor. “It’s about finding the balance between what are the sounds that people are used to, but how can I make something different that entices them.”

Surusinghe definitely nailed that brief with her debut upload, ‘BAD GIRLS’, which landed on triple j Unearthed in early April. Not only did it cop a perfect five-star review from House Party host Jade Zoe, it also scored glowing write-ups from the likes of Weekend Breakfast’s Stacy Gougoulis, Home & Hosed’s Declan Byrne and more.

The track will appear on Surusinghe’s forthcoming EP with Steel City Dance Discs that’s dropping in June and you’ll also hear it across triple j and Unearthed this week.