” 6.48 minutes into the video you see me getting hit. I took 6 blows from him on my body. Still he didn’t get me out. Retired hurt at 53. Next to me is Duleep getting hit on the head” – “Sunil Wettimuny”

How Sri Lanka showed grit and displayed a ‘never say die’ attitude against the murderous bowling of Jeff Thompson and Dennis Lillie in  the First ICC World Cup series match between Australia and Sri Lanka played at the Oval in June 1975.

The defiant and gallant batting of Sunil Wettimuny who scored a heroic 53 (retired hurt), Duleep Mendis, Ranjit Fernando, Bandula Warnapura, Anura Tennekoon, and Michael Tissera earned for them and Sri Lanka a place at the High Table of World Cup series memories.

Sri Lanka went down in this match glorious in defeat.

“But they fought gallantly. Sunil Wettimuny took blows but stood firm. Twice Thomson hit him painfully on the inner thigh. One ball struck the hip bone. Another thudded into the rib cage. But Wettimuny did not give up. He battled on”

They were still referred to as Ceylon. Even though three years ago they had become a republic within the Commonwealth and had changed their name to Sri Lanka. Along with East Africa, they were the other team from the out-of-Test-playing world to dare to compete in the tournament.

In their respective first matches in the World Cup, the motley group of Africans had been hammered by 182 runs by New Zealand and the Lankans had been blown away for 86 by the mighty West Indies. The 9-wicket defeat had seemed to be par for the course for this new nation on the cricketing block. (Indeed, given the illustrious history of cricket in the island, Sri Lanka were actually not that new. Only, they had not made it to the top grade yet.) 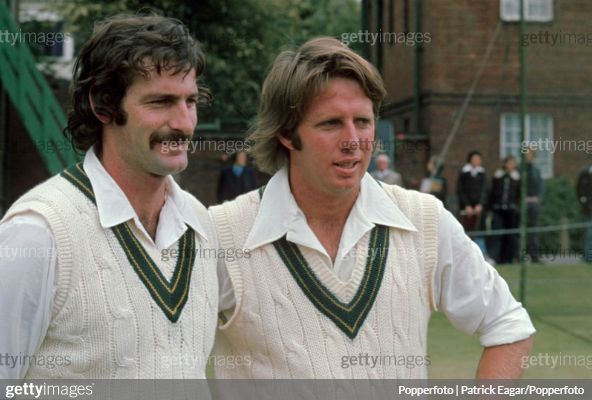 Four days later, East Africa took on India at Headingley and were crushed by 10 wickets. On the same day, down south at The Oval, the Sri Lankans found themselves up against incredibly stronger opposition. Player for player, the Australians were the strongest side in the World Cup. The Chappell brothers, Doug Walters, Rick McCosker, Ross Edwards and the rest with the bat. Dennis Lillee, Jeff Thomson, Gary Gilmour, Max Walker, Ashley Mallett with the ball.

The Sri Lankans were expected to be battered, bruised and humiliated.

Battered and bruised they were. Humiliated? No. They drew the line at that.

Anura Tennekoon decided to send the opposition in. Was it because of some astute strategy? Or was his decision influenced by the proposition of facing Lillee and Thomson on a fresh morning wicket?

In any case, the humiliation seemed all but official when openers McCosker and Alan Turner put on 182, the latter getting 101 in quick time. After the wily leggie Somchandra de Silva got rid of both, and Ian Chappell had fallen early, Greg Chappell and Doug Walters cracked half-centuries. The 328-run total was mammoth for the era, even in a 60-over match.

And then Lillee and Thomson charged in. The Sri Lankans had never seen pace like that.

But they fought gallantly. Sunil Wettimuny took blows but stood firm. Twice Thomson hit him painfully on the inner thigh. One ball struck the hip bone. Another thudded into the rib cage. But Wettimuny did not give up. He battled on. 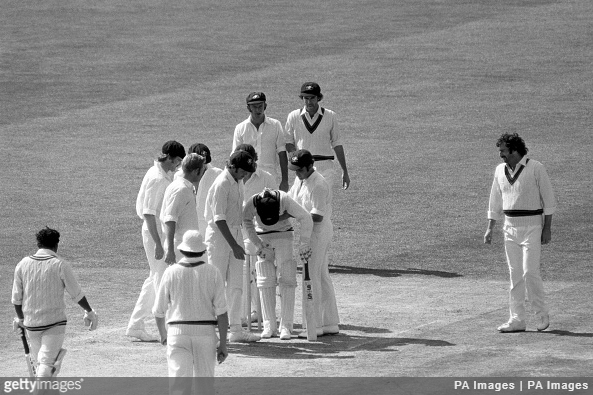 Wicketkeeping opener Ranjit Fernando compiled an 18-ball 22 before Thomson spreadeagled his stumps. Bandula Warnapura joined Wettimuny and the score was pushed along intelligently. Especially Mallett was being milked for plenty.  Walters, Walker, Lillee and Greg Chappell, all were being scored off with comparative fluency.

Warnapura did pay the price of being a tad too adventurous. He was stumped off Mallett for 31. But the scoreboard showed a healthy 84 by then. And the new man at the crease, Duleep Mendis, oozed class.

In the 32nd over, Sri Lanka were on 150 for 2. An unthinkable upset was well within the realm of distinct possibilities. And Ian Chappell was desperate.

He decided to put the terrible duo back on. Lillee ran in from the Vauxhall End. And, more impactfully, in the real physical sense, Thommo sprinted in with the pavilion behind him.

According to Alan Gibson, the ball that knocked Mendis out was not really a bouncer but a short ball aimed at the body. Thomson later claimed, “They were only little fellas, so you couldn’t call it a bouncer exactly.” 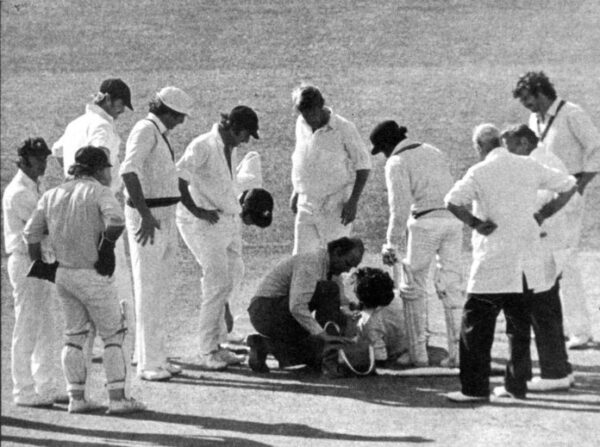 Duleep Mendis receives medical treatment after being hit on the head by Jeff Thomson. Image Courtesy:

In any case, the ball struck Mendis on the head and he went down as if shot. As he came around, the future Lankan captain murmured, “Oh my God, I’m going.” Later, he denied making this comment.

As the diminutive batsman left for the hospital, the crowd jeered Thomson thoroughly. Not that it affected the fast bowler.

Wettimuny was now struck on the left instep. As the batsman hobbled in pain, Thomson proved to be the soul of the spirit of cricket. “Look, it’s not broken, you weak bastard. But if you’re down there next over, it will be.” 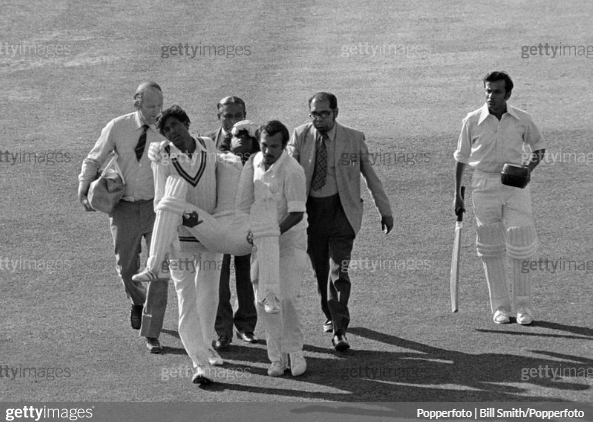 The score had progressed to 164, for 2 wickets plus an injured Mendis, when Wettimuny faced Thomson again.

The ball landed once more on Wettimuny’s instep. The opener, who had weathered all the blows bravely till now, jumped around in extreme agony. Supposedly egged on by teammates, Thomson picked the ball up and threw down the stumps with the batsman writhing in pain outside the crease. But none of his cronies appealed with him. In his colourful language, he recalls, “No other bastard moved. They all sat or stood there with their arms folded. They’d done me stone cold.”

However, that was it for Wettimuny in any case. He limped half the way back to the pavilion but had to be chaired off thereafter. Soon, he was on his way to join Mendis at the hospital.

Yet, the Sri Lankans were not really giving up without a fight. Captain Tennekoon and the steady Michael Tissera added 82 brave runs, before both were dismissed by Ian Chappell when the asking rate had become too high. Tissera hit a suave half-century and although it was a lost cause by the time the two men got out, there was none of the anticipated humiliation. 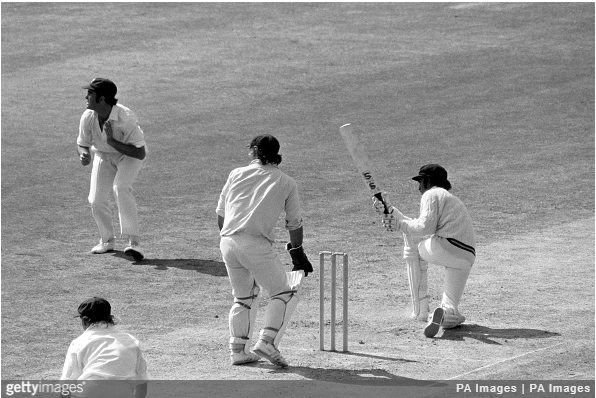 At the hospital, Wettimuny and Mendis encountered a London cop, who had just got to know that an Australian cricketer had roughed up two Sri Lankan men. After being told that it was Jeff Thomson, this guardian of the law asked the cricketers whether they would like to press charges.

The two injured men were discharged the next day. Wettimuny walked on crutches for a while, and Mendis had to miss Sri Lanka’s last match because of a persisting headache.