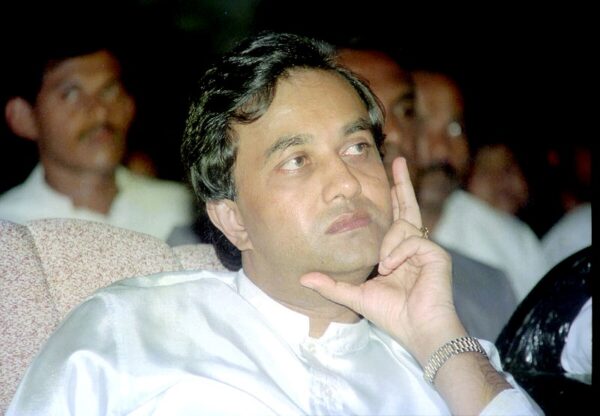 When Sri Lanka seized the World Cup from the Australians in the year 1996 they unequivocally proved to the whole World that the Sri Lankans were a power house in the cricketing world. The whole country was jubilant. Youth danced in delirious delight. The moment was ecstatic. Grateful as Sri Lankans usually are

many a mind recalled with joy and profound gratitude, inter alia, the one man who made the Sri Lankan dream a reality. In silent appreciation they remembered the name of Gamini Dissanayake.

GD was born into a family of dignified lineage in Kandy. He qualified as a lawyer. Forsaking what would have been a lucrative legal practice he entered politics and soon was given the coveted position of Minister of Mahaveli Development. Having forsaken his lucrative legal career to pander to his innate desire to help the masses, he achieved significant success in emancipating masses from poverty, enhancing the lives of the poverty stricken. Despite this laudable achievements in the field of agriculture his noteworthy contribution nationwide was the uplifting of cricket thereby securing the world endorsement of  Sri Lankan brand of cricket and its stature as  a Test playing nation.

When he took over as the President of the then BCCSL. now SLC was in a chaos situation. He like any other leader believed chaos precedes order. He systematically tried to restore order, infuse discipline, demolish the distort machinery that was in operation at the time.

He changed the infrastructure of our cricket which remained unchanged for years. He set new trends and values in conducting the activities of the then board. He inaugurated the Sri Lanka Cricket Foundation and was adamant that at any price he was obtaining full ICC Test status with full membership. He then embarked on a programme of exertion with a visualization to accomplish what he felt was of paramount momentous for Sri Lankan Cricket. This included the construction of a modern building to house the headquarters of cricket at Maitland Place, construction of contemporary indoor net facilities, development of the Asgiriya and other grounds at provincial venues to play international and domestic cricket, inaugurated a programme to send young cricketers for training overseas, launched a cricketers’ benevolent fund simultaneously commencing intensive training for Umpires, Curators and Coaches.

Initial discussions with the reticent ICC failed. The veto power of Australia and England was commanding. These white test playing nations harboured a aversion to new Asian Nations entering the test arena. Undaunted he tried again and was met with the same stubbornness. Abandoning his individual approach, he tried a collective approach. This time he had the support of A.H Kardar President of the Pakistan Cricket Board. They together formed the Asian Cricket Council.

This achievement was even more remarkable in the perspective that he held office as the President of the then board, only for a couple of months The ICC knew very well that we were eligible to enter the elite cluster. The officials of the ICC knew very well that we were well apt and eligible to pierce into the elite congregation. But at each annual meeting they meted out to us step maternal conduct. But we had to linger despite performing all the spade work. It was the fashionable dynamic attitude of the late leader, Gamini Dissanayake, which aided us to be designated as full member after his mesmerizing speeches and brisk answers made, which set aside the audiences of the ICC constantly spellbound. Another significant contribution made by him to international cricket was the desperate plea to the ICC for India and Pakistan to host the 1987 World Cup, away from England for the first time. Addressing the ‘chair’ he said there are millions and millions in the sub-continent obsessed and passionate about this game of cricket. Adding further he had said “You have already staged three World Cups in England from the inception in 1975 and are you going to deprive those living in the sub-continent the opportunity of viewing an ICC cricket World Cup It is a moment in time that we globalize this event in the best interest of the game of cricket?”

In the context of the above all fanatical cricket fraternity in Sri Lanka and overseas should be indebted to late Gamini Dissanayake who was totally liable on our agitated pursuit for full membership of the ICC. It was ill-fated that we lost him in a terrorist bomb attack on 23rd October 1994 when he was canvassing at a meeting for his own presidential candidature 25 years ago.