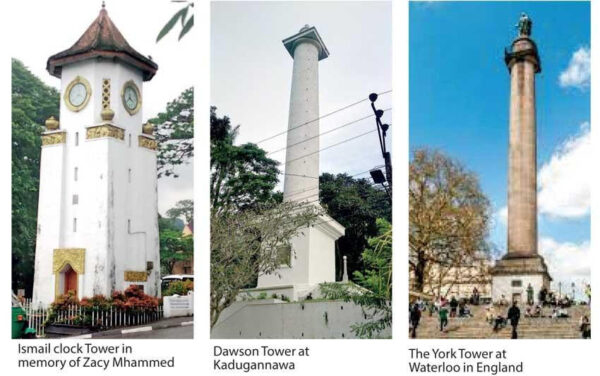 Capt.William Francis Dawson and Lt. Gen. Fredrick Skinner as the Survey General was instrumental in constructing the 7km road from Hingula to Kadugannawa – the present Pahala Kadugannawa which is now indefinitely closed for motor traffic. In fact, Lt. Gen. Skinner had surveyed the entire Kandy District for roads and Highways on the orders of Sir Edward Barnes, who is claimed as the road-builder.

Sir Edward Barnes did much of the roads in the country with Surveyor General Skinner. Lt. General Skinner came to the country to join the Army with a commission. His first task was to take troops to Kandy from Trincomalee soon after the 1818 rebellion and then he stayed for fifty years in the country only to return back to his family though he was requested to stay for another period of service.

The British during the period of Sir Edward Barnes built roads for the Army and the coffee planters. Both Dawson and Skinner got involved in road building and it was not for heavy vehicles. According to Skinner, it was a time when the ‘Theodolite’ came into the hands of Surveyors and records in his “50 Years of Ceylon ‘that a sum of 437 pence was used to build and 1,285 sterling pounds were used to build the railway to Kandy. Their primary motive was to move the troops to the Kandyan region and secondary was the commercial aspect. The British had to keep the administration going after the 1818 rebellion.

The road which cuts across a terrain of rocks and sand was invariably built for light traffic and not heavy traffic, which cannot hold the heavy laden trucks and container, now. But, when heavy traffic moved under the ‘guise of development ‘the top engineers never spoke a word against those who needed the enlargement of the road to Kandy. They even postulated the theory of opening a road adjacent to the rock to take the Cement bowsers and the heavy containers. The engineers never advised the politicians who wanted this road way over the rock, that it was not a possible task as it could give away and create a situation where even the rock would suffer. It did. The rock entrance has been rehabilitated recently and it was kept closed as a showpiece, but was used in the emergency that occurred recently

But, there were people like Late Chief Minister W.P.B.Dissanayke who advocated that Heavy traffic should go along Galagedera and it did for a short time and then came back to normal and used this terrain of Pahala Kadugannawa.

The High profile engineers and some of the knowledgeable people in the country bow down to the whims and fancies of the politicians at the risk of ‘ their ‘ country and the end result is what we are experiencing today. Now most of them are of opinion that the by-pass over the historic ‘ rock entrance ‘ should not have been built and it is from here that water is seeping into the roadway.

When scientists in the Universities speak against the whim and fancies of politicians they are branded. But, the men in the Universities has nothing to lose with their findings but only to serve the country which had given them free education and they stand by their conviction’s

Be that as it may, when the eminent Geologist Prof. Vithanage observed and informed the then Minister of Power that Victoria reservoir should not be built at the present site as there is a living ‘rock vein’ underneath the site and if the reservoir is built it would break within a specific period or be a disaster for the country as the country itself is moving away from India. They just scoffed off the idea and built the reservoir. Now we find the tremors around and no one speaks of what has been said by Later Prof. Vitanage. He said that there was copper, silver, and other minerals on the present reservoir bed. A Journalist colleague of mine who was with him on the adventures of collecting scraps of silver copper and other metals from the bed of the river with water running into a ten-foot fall which was named Victoria by the planters has written a book on what has been said professor Vithanage. But, even geologists ‘seems’ not to be speaking of his findings.

The memory of the man who designed the Colombo – Kandy road was Lt. Gen. Skinner and the man involved in the construction was Capt. William Dawson, in whose memory is the Dawson Tower erected from public funds collected by the grateful citizens of the country.

There are a number of stories connected with this road from Hingula to Kadugannawa, both eerie and otherwise.
My Grandfather was an FPL (Foreman Plate Layer ) of the Railway- when there was only one in the district. He used to tell me stories of the Railway line and once he told me that there is a rock in the hill right opposite the Balana Railway station and said that there is a saying that this rock would come down someday to the area of the ‘ rock entrance to Kandy ‘. Maybe or not, but it would take years to come! Railway department officials are aware of this rock and it is said that they have built a buttress to know the movement.

But, if this scenic road and the Tourist’s paradise as much as for the locals, then all Heavy Traffic should be diverted through Galagedera at Mawanella or through the road leading to Gampola having widened this road.I am no road builder or engineer, but this is the truth if this scenic road should remain as a pass to the once Kandyan Kingdom – the last stand of the people from foreign domination.