The structure of Panavitiya Ambalama stands on a platform of 12′ 4″ and 9′ 6″ (approximately 3.6 meters and 2.7 meters) raised about a foot (approximately 0.3 meters) from the ground with rubble as its base resting on four rounded boulders.

The nine inner pillars with some pillars 6 feet (approximately 1.8 meters) in height are copiously carved with mythical creatures, floral designs and scenes from daily life including musicians, dancers, acrobats, wrestlers and persons greeting each other.

The woodwork of the roof comprising beams, posts and rafters of exceptional wood comprise mythical creatures, processions with musicians as well as demigods.

According to scholars, Panavitiya Ambalama dates to the 18th century. At present, it is a unique monument that displays the ancient architecture of Sri Lanka (former Ceylon). 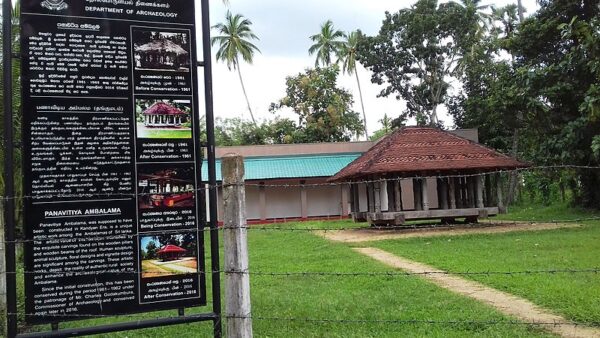 At present, during a long haul journey, travelers stop at roadside hotels and rest houses to freshen up and have some tea. Yet, in the past, the weary traveler needed a place of refuge when traveling through long stretches of mountainous areas, fields and forests. Centuries ago, travelers, merchants, pilgrims and horsemen stopped over at an Ambalama to take a rest from their long arduous journey. Aristocrats traveling on palanquins, traders traveling in bullock carts and people from all walks of life made use of Ambalama as a place to rest.

With the advancements in modern transport methods and accommodation facilities, the necessity and usefulness of Ambalamas diminished. Hence, at present, this simple structure is considered as a unique monument, a memoir of yesteryear and an icon of journeys of old Ceylonese travelers. The construction of an Ambalama was a cooperative effort by villagers. Sinhala Buddhists believed that it was a meritorious deed to provide shelter for the weary wanderer. In the past, a pinthaliya (a traditional container with potable water) was placed in front of certain Ambalamas and villagers had filled them with water for travelers.

Robert Knox has described about an Ambalama in his text ‘A Historical Relation of Ceylon (1681)’ as: “At their leisure, they commonly meet at places built for strangers and wayfaring men to lodge in, in their language called amblomb, where they sit chewing betel, discoursing concerning the affairs at court between the King and great men”. 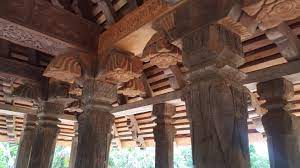 Ambalama is a structure designed and constructed as an architecturally simple structure to provide shelter for travelers. It had also served as a meeting place for the village folk where they exchanged gossip, pleasantries, discussed politics, especially the mighty deeds carried out by the reigning king as well as served as a Gam Sabhawa (Village Council). Ambalama was a unique structure closely associated with Sri Lankan culture and embedded in day-to-day life of people. The majority of Ambalamas are located on a rocky boulder, near rivers or streams where the weary wayfarer can quench his/her thirst with water and refresh himself/herself by bathing.