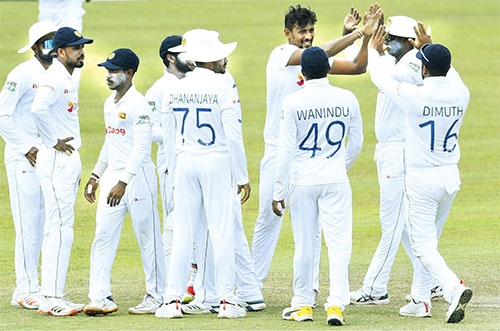 A bitter pay dispute is on the cards after salaries of Sri Lanka’s national cricketers were cut by significant amounts lead up to the two Test series against Bangladesh.  The national cricket team is currently engaging in the series having refused to sign annual contracts and the deadlock could have a serious impact on the sport. The players have been without central contracts since January.

The players are disgruntled that they are going to lose out a significant portion of their pay in the central contracts.

A player in the top category according to the previous contract earned US$ 130,000 but now that could be lesser than US$ 45,000; a 200% salary cut. Also taken out of the pay package is the seniority payment. For example, a player with over 20 Tests would get paid an additional amount of US$ 500, over 40 Tests an additional amount of US$ 750, over 60 Tests a bonus of US$ 1000 while someone who has represented the country in 80 Tests would earn US$ 2000 additionally, for every game he plays. That incentive has been completely taken off, angering the top brass of the national cricket team.

Although the first category has been reduced to US$ 100,000, in reality, someone like Suranga Lakmal, who features in Test cricket only, could earn something like US$ 45,000. That is because a points system decides how the players get paid and those who represent the team in all three formats have a better chance of getting the entire 100,000.

However, it doesn’t give someone like Lakmal, who has been highly impressive in the last two years, to continue to toil in Test cricket any longer. The easier option for him is to sign up a three year County Cricket deal in England, which would ensure him a pay of GBP 100,000 for a season, four times the pay compared to SLC’s annually.

Players are in discussion with their lawyers on what course of action that needs to be taken.

The details of the new contract were explained by Director Cricket Tom Moody by teleconference prior to the start of the current series. “Although Tom explained the contents of the contract, he got stuck at certain points unable to explain some of the things. It seems that this wasn’t prepared by him but someone else,” a player told The Island.

So, who is the mastermind who prepared the contract that has put the players on warpath with their employers? It appears that the mastermind is a former captain who is currently roaming the streets of Colaba, Bandra and Andheri and in his playing days teamed up with crooked player agent Charlie Austin asking for the pound of flesh from SLC.  He’s now a poacher turned gamekeeper.

Everything is not gloomy about the new contract though. There are some excellent clauses like failure of two kilometer run or skin-fold test resulting in you losing significant portion of your contract. Or in case of Kusal Mendis’ hit and run, that would result in losing the entire contract.