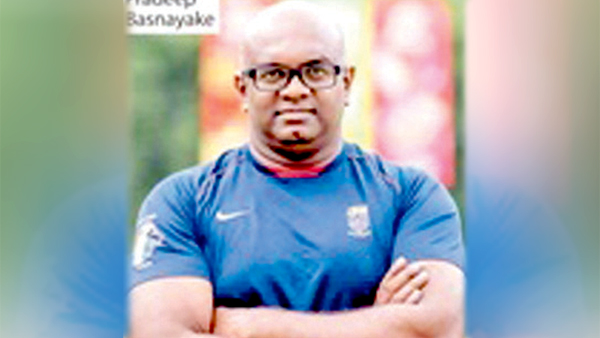 He played for Kandy SC for ten years and many years for the country and gave his best as a top class forward. and was a top class coach, he started his coaching at Trinity College in 2008 being in charge of the Under 20 outfit and later on taking charge of the Under 18 side. Regarded as one of the top men in the field of rugby, he is the present head of the Central Province Rugby Union and is having big plans to develop the game.

As CPRFU president he should give a big hand to come out with rugby grounds, Today there are so many schools in the game of rugby and produce some good players with only one club there are no lower division clubs in the game. Only two grounds the Bogambara Stadium and the Municipal leased Nittawela grounds, both ground fees are too high for a game. Thanks to Trinity College whenever they give their grounds at Pallekelle the fee is normal.

Pradeep Basnayake a ruggerite who learnt his rugby at Trinity College in the years 1994 and 1995, played for Kandy SC from 1996 to 2005 and captained in 2002 to win the triple. It was in 2003 and 2004 he led the national team at the Rugby Asiad and Rugby World Cup Asian qualification events. Today his main aim is to give a big hand for rugby in Central Province. He is a world rugby level II course holder.

Now he is a top class coach and started his coaching at Trinity in 2008 being in charge of the Under 20 outfit and later on taking charge of the Under 18 side along with Thushitha De Silva. Former Trinity Lion, Kandy SC, Sri Lanka skipper and double international (rugby football and basketball) Pradeep Basnayake who completed his World Rugby level II course and became the first Sri Lankan double international to complete the course.

He was a national rugby selector and performed duties admirably from 2010 to 2013. Later he was a match commissioner at A Division games. He was coached by people like Quinten Israel, Janaka Kiridena and Lohan Ratwatte at school; they taught him the basics in rugby. Later on at club level he was coached by George Simpkin Ex. DIG Nimal Lewke and C. P. P. Abeygunwardena as well. As the present head of the CPRFU his main aim is to bring back the game to its former position in Central Province.