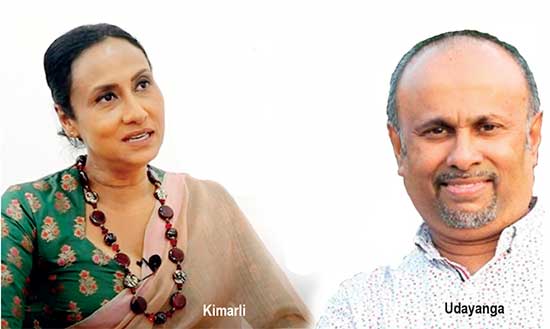 Soon after the arrival of two groups of Ukrainians, on Dec 28 and 29, 2020, three of those visitors tested Covid-19 positive. Yesterday, a member of the visiting England cricket team Moeen Ali was found to be Covid-19 positive.

Minister Ranatunga stepped in after Sri Lanka Tourism (SLT) Chairperson Kimarli Fernando alleged that neither the promoter of the Ukrainian project, former Sri Lanka Ambassador to Moscow Udayanga Weeratunga, nor the travel agents concerned, had provided the required information.

Fernando raised questions about the Ukrainians going on excursions to Mirissa for whale watching and Yala safari without following proper procedures. The SLT Chief warned of dire consequences unless necessary protocols were followed.

Amidst growing concern over further deterioration of the Covid-19 situation, Minister Ranatunga instructed the relevant officials to prevent a recurrence of the situation similar to that of Ukrainians visiting Yala. Among those present at the discussion were Sports Minister Namal Rajapaksa and State Aviation Minister D.V. Chanaka. The Minister emphasised the pivotal importance of following health guidelines in place in support of the ongoing pilot project ahead of the opening of Bandaranaike International Airport (BIA) later this month.

Before the commencement of the Ukranian project, under the leadership of the Tourism Ministry, relevant bodies reached agreement on tour organisers providing, well in advance, detailed itineraries, including drivers and guides to arrange proper screening and quarantine purposes.

A member of the visiting English cricket team all-rounder Moeen Ali tested Covid-19 positive immediately after arriving at the Mattala airport on Sunday, January 3. All members of the English team were subjected to PCR testing. Authoritative sources said that in addition to Ali, who was placed under quarantine for 10 days, another Englishman, Chris Woakes, identified as a close contact, too, had been quarantined and expected to undergo PCR test along with other members today (5).

The two countries went ahead with the two test match series despite the UK struggling to cope up with the rapid spread of a new virulent variant of Covid-19 virus that compelled the UK to impose tougher restrictions.

Sri Lanka suspended flights from the UK though the English team was allowed in. They arrived in British Airways flight to resume a tour which was cancelled at the onset of the first Covid-19 wave.

The first Test is scheduled to start on January 14.

Meanwhile, Samagi Jana Balavegaya MP Patali Champika Ranawaka yesterday (4) flayed the government over the Ukranian tourism project. The former minister alleged that the government had risked a major disaster by allowing Ukranian tourists, particularly at a time the Europe was struggling to cope up with a new variant of Covid-19 virus.

Ranawaka questioned the SLPP government’s strategy in trying to boost tourism by bringing in people from Ukraine, a country in a far worse situation than Sri Lanka. The former yahapalana heavyweight said that visitors from Europe could open Sri Lanka to grave danger due to the new Covid-19 variant. The MP pointed out that the government was on record as having said that the second Covid-19 wave had been caused by a Ukranian.