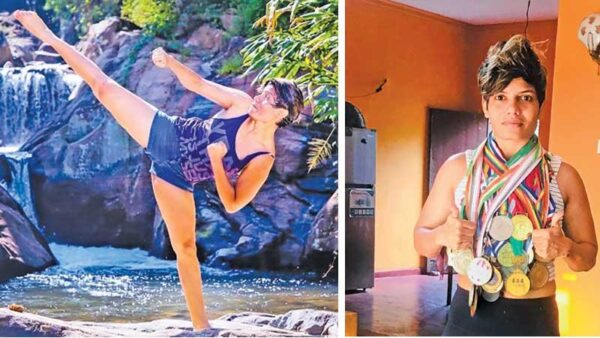 Dinusha gets a kick out of karate-Dinusha with her many medals
Source:Sundayobserver

How movie idol Jackie Chan inspired Dinusha Perera to fall in love with the macho sport of karate that made her one of the country’s most represented medal-grabbing sporting ambassadors:

Inspired by Hollywood action hero Jackie Chan’s movies, Dinusha Perera became infatuated with the martial art of karate from the tender age of six and made it her career against the wishes of her parents. The lissome lass could have easily chosen the easier path to success as a model. But her fighting instincts and burning desire to represent the country saw her embrace the sport of karate.

That too Kumite, one of the three main sections of karate training, which involves sparring against an opponent for three minutes. The dedication and sacrifices she has made to become Sri Lanka’s leading exponent of this martial art is perhaps unrivalled. She is virtually married to the sports but running out of challenges to keep herself motivated to bring glory to Sri Lanka on the international stage.

The 10-time national Kumite champion in the 55kg weight class can walk away from the sports with her head held high having bagged 13 medals at international level, including four gold medals and a Presidential award for the most outstanding sportswoman in 2015 and 2019. The 32-year-old battle-scarred veteran has taken many body blows and suffered two broken teeth during her many duels and is not yet ready to concede her top ranking to the young brigade.

“I started karate as a sport from the age of six after watching Jackie Chan movies. My parents did not agree at first because it is a combat sports. From a small age I wanted to learn this martial art and wanted to win a medal for Sri Lanka,” said Dinusha whose younger sister Chathu is an aerobic gymnastic coach and teacher at Devi Balika Vidyalaya.

Just as wine tastes better with age, Dinusha wants to dispel the myth in Sri Lanka that the expiry age for sportsmen and women is 35. As an example she pointed out the fact that a 39-year-old Sandra Sanchez of Spain, won karate’s maiden gold medal at the Olympic Games in Tokyo. Incidentally, the Spaniard, known as the ‘queen of kata’, is her role model besides Jackie Chan. Similarly, Dinusha is determined to prove that with her experience and maturity, she still has life in her to scale more peaks in the future. Her goal is winning a medal at next year’s Asian Games in a bid to qualify for the 2024 Paris Olympics.

It is with this in mind that on her own initiative she has decided to travel to Canada to undergo a three-month training programme under Gabriel A Sylla in Toronto. Although she has many accomplishments in her career, she is not considered a high performance athlete by the authorities concerned. Throughout her career it is her doting father Chandrasoma Perera, a lathe machine operator, who has been the pillar of support as Dinusha indulged in the sports full time. Dinusha not only eats, sleeps and breathes karate, she always seeks to update her knowledge of the sport at every given opportunity. In 2007 she trained under an Italian coach in Sri Lanka and in 2013 she benefited from a three-month training in Malaysia under their national coach Sensei Arwalagan. She then lapped up the expertise of Iranian coach Mahdi Kareem who was here for a year before the 2019 South Asian Games where Dinusha was the only Sri Lankan female karateka to win a medal.

Don Pawulu Badalge Dinusha Kumari Perera is the fourth in a family of five girls who received her early education at Baptist College, Kadawatha before graduating to Kadawatha Madya Maha Vidyalaya in Grade 5. Her inclination for sports saw her take part in netball, athletics and volleyball but she pursued her passion karate coming under the wing of Nilantha Wickramagalle of the Nihon Shotokan Karate Association of Sri Lanka. He has been her personal coach since and guided her to great heights.

She made her international debut in 2002 representing the Sri Lanka Schools team at the Ghaziabad Invitation tournament in India where she won a silver medal. She also represented Sri Lanka at the Asian Junior Championship in Malaysia in 2008, the year she won her first national title which fuelled her ambition of representing the senior national teams.

Dinusha’s prodigious talent saw her selected to represent Sri Lanka as a 17-year-old schoolgirl for the Asia Martial Games in Thailand in 2009. She went on to take part in 28 international tournaments, including the 23rd World Karate Championship in Vienna, Austria in 2016 where she was ranked 161st.

Dinusha attributes her success to setting targets and working hard towards achieving her goals. “Representing Sri Lanka as a schoolgirl and foreign exposure helped. Getting that experience and personally making sacrifices for the sports, I strived to achieve my targets with hard work,” recalled Dinusha who now trains at home.

Although she is engaged in a contact sport, fear is not in her vocabulary and is unfazed by pain. “I suffered four injuries and broken teeth. For a lady it is especially difficult because some don’t like to see ugly scars affecting their physique. As a sportswoman I had to face these challenges,” said Dinusha who also did some photo shoots as a model a few years ago.

“I was also a model. I had to give it up because of karate. I felt there are a lot of people who can take part in that industry. In a sport like karate, there are only a few. I wanted to do something for the country. To bring medals for Sri Lanka. I am happy as a lady to bring glory to Sri Lanka,” she said.

“I believe the path I chose was right, seeing what I have achieved. My goal at the beginning was to represent Sri Lanka. I made progress step by step from South Asian to Asian level. My dream is to take part in the Olympics for which I have to take part in world ranking tournaments,” she said.

Dinusha has won many laurels for Sri Lanka despite training with limited facilities. “In karate you need to be mentally and physically strong, apart from having endurance and technique. I hope to improve this during my training in Canada where there are facilities and an environment for training. If we have these facilities, we can bring more honour to Sri Lanka,” said Dinusha, who is obsessed with martial arts movies and also watches travel videos during her pastime. Her favourite Jackie Chan movie is ‘CZ12’.

She is confident of staying on top in the sport for another three years at least. “With my experience, if I can maintain my physical fitness and focus mentally, it is possible to achieve targets. If your mind feels that it is enough, then I will retire,” she said. 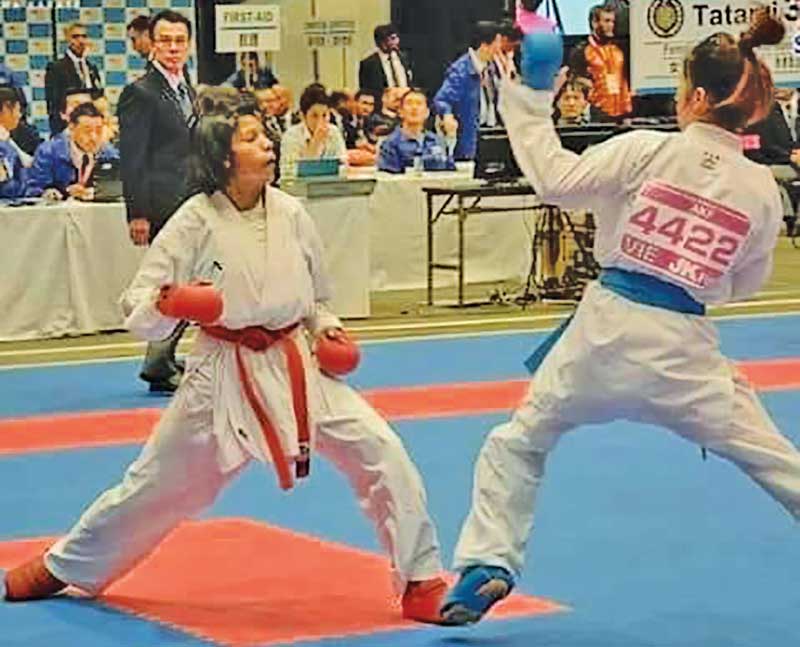 Dinusha Perera at the Asian Karate Championship in Japan, 2015