THANK YOU FOR THE MUSIC –  By – Algi Wijewickrema 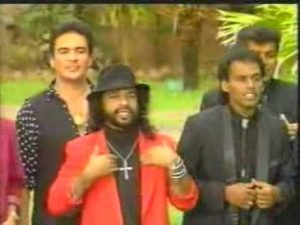 When you have an email address like “noproblemperera” I’m sure you readers would expect an out of the ordinary person. Out of the ordinary is an understatement really for arguably Sri Lanka’s most versatile and entertaining musician. He is the leader of a band that is not only popular among Sri Lankans living here but also popular with Sri Lankans abroad. He is none other than the leader of the “Gypsies”, Sunil Perera.

When I visited Sunil at his studio in Ratmalana where their family business has existed for decades, he was ready to accommodate us but the interview was inevitably disturbed by many telephone calls that kept coming which to me proves how busy this man can still be and how the popularity of Gypsies has not diminished.

Beginning with his school days at St. Peter’s College, Bambalapitiya, Sunil recalled that he first performed at College functions with Hilary Wijewardene and Adrian Ariyaratne adding that the family band came into being much later, in fact after leaving school.

Before joining St. Peter’s he had been at St. Sebastian’s College, Moratuwa from the Lower Kindergarten up to 3rd Standard (year 1 – 4 for the present day student) and recalled two well known cricketing personalities as classmates, Duleep Mendis and Flaian Aponso.

Asked if he agreed that music was in his blood his nonchalant response was “I don’t know if there is anything like that in my blood, but we had music in the family”

So how did this music in the family begin? His first encouragement had been from his father who had presented him with a ukulele from which he eventually graduated to playing the guitar. After passing his GCE (O/L) his father again had been responsible for choosing the name “Gypsies” for his musically talented band of offspring. Sunil says that the name was chosen as gypsies are nomadic and are musically inclined.

The family band of musicians was formed with four brothers Nihal, Lal, Nimal and Sunil himself together with cousins Noel and Neville with their first stage performance being a support act for “Savage”, as an additional band singing English songs.

There was no big money in the English music scene with their performances limited to Colombo lamented Sunil but did add that life was simple then. He recalled with gratitude that the Gypsies’ change to Sinhala pop music was primarily because of a pioneer in that field, Clarence Wijewardena.

The “Baila” idiom which was their forte was the influence of their father and his brothers who were keen fans of versatile Baila singers, Walley Bastians, C T Fernando and M S Fernando.

Continuing the story of Gypsies, Sunil said that what was called “pop culture” was not allowed nor encouraged by the broadcasters in the 1970 -77 era, the Sri Lanka Broadcasting Corporation being the only public broadcaster then with no TV either. So naturally they, along with others who were labeled “Sinhala pop musicians” struggled. However, Sunil said, with a grateful heart that one man stood out in his support for the Sinhala pop songs and that he said was Vijaya Corea.

The first Sinhala song recorded by the Gypsies was “Lindalanga Sangamaya” in 1973 and that was when only vinyl disks (records) were available. The first cassette was “Kurumitto” which he said was penned by Chandra Deva-Adiththya. The best selling among his songs according to him were “Kurumitto”, “Lunu Dehi” and “Ojaye” which popularity he attributed to these being stage acts.

Though forming a band was not a planned move, Sunil was of the opinion that the success achieved was a blessing. Talking about members of his band, he singled out the longest standing member of his band, Derrick the bass guitarist.

Deviating from the music scene and responding to questions of his involvement in their family business “Glukorasa” products, Sunil was quick to add that he was never involved in business but some of his brothers who originally formed the band were involved. For him, according to Sunil, it was music, music, music. One thing he nostalgically recalled was that it was Christopher Paul who sang the very popular jingle “Glukorasa Maame”.

Continuing on his musical career Sunil said that their first overseas tour was to India in 1978 but it was not a successful one according to him. For him the successful tour was to Sajah in 1986.

Other countries visited included England, Canada, USA, Hong Kong, Singapore, Malaysia, Indonesia, Australia and New Zealand and Sunil happily mentioned that it was his Sri Lankan fans who were responsible for such overseas tours as these had been undertaken always at the invitation of Sri Lankans.

He had never been under pressure from politicians according to him though he’s been in the music industry for four decades and called this a blessing, as he did with regard to the success of his band.

There’s an interesting story to tell when it comes to his marriage. Here is a man of about 30 singing on stage, dashing no doubt and there’s a 15 year old girl in the audience keenly watching. Love at first sight? May be, but the upshot of all this dashing looks and keen watching is a quick and fast wedding. But unlike some marriages of haste that result in one or both parties repenting at leisure, this marriage of Sunil and his wife has lasted for 32 years and continues.

Are his children following in his footsteps? Yes and no. Gayan his eldest started the band “Daddy” but is now married and living in USA. His other son, Sajith was a singer but is now into tourism. Of his two daughters one is married and the other is into fashion designing.

Before concluding the interview, as a senior in Sri Lanka’s music scene Sunil says that music needs to change and he sees it happening everywhere. He says when he followed the popular music scene at the time he started, there was a lot of criticism but that such criticism never bothered him.

The parting message from this veteran but ever youthful band leader was “do what you’re good at and do it differently if that’s what you want. Don’t bother about following anyone in particular but just do it and never bother with criticism”.

As I parted from him I could not help but say “thank you for the music, Sunil”.