Birthday boy Desmond does it in style 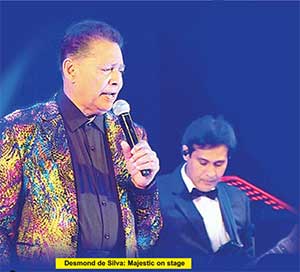 I’m not a big fan of the baila. It’s not that I dislike this fun-type of music but there are artistes who tend to overdo it, in a mundane way, at their concerts, and that, invariably, leads to boredom.

Obviously, taking all this into consideration, I was a bit apprehensive to check out “A Celebration with Desmond de Silva.”

On the morning of the show, I was in two minds, but the home crowd insisted that I join them.

Let me tell you that the legendary Desmond de Silva proved my thinking wrong…with a superlative performance that made me wish the three-hour concert could have gone on and on!. Of course, Desmond is a maestro and when it comes to showmanship and presentation, he is streets ahead of the rest.

He galvanized the large crowd into immediate action with his beaty opener – the Paul Simon hit ‘Late In The Evening.’ And, he maintained the momentum, and excitement, right throughout his performance.

He did it fast, he did it slow – ballads, rock ‘n’ roll – and then those infectious bailas.

The crowd went into raptures and Desmond got them involved in some of his hit songs. And, they responded beautifully, and with plenty of enthusiasm.

They were heard loud and clear as they helped the birthday boy with various chorus lines.

Yes, he still has those moves – despite hitting the 75 mark!

Let me put it this way: Desmond, as an entertainer, has no competition. He is par excellence.

He is a true professional and knows exactly how to keep an audience entertained. 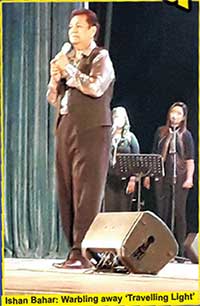 Guest performers Ishan Bahar (of Jetliners’ fame) and Mariazelle Goonetilleke also played an integral part in the success of “A Celebration with Desmond de Silva,” held at the BMICH, on Saturday, August 31st, 2019.

I liked Ishan Bahar’s rendition of Cliff Richard’s “Travelling Light” and the crowd, too, showed their appreciation with an enthusiastic round of applause.

The band of musicians, who did yeoman service, on stage, backing the performers, displayed a lot of professionalism.

I was particularly impressed with the way they responded, musically, to Desmond’s hand movements.

And, when the audience exercised their vocal cords, on Desmond’s instructions, the music, simultaneously, slipped into low volume, and quite rightly so.

Thanks, Des, for a memorable 75th birthday gift to your fans in Sri Lanka.

And…thank you, Damayantha Kuruppu, and DK Promotions, for a well-produced evening of entertainment.