Radiology is the medical discipline that uses medical imaging to diagnose deceases within the bodies of humans.Under Radiology there are a variety of imaging techniques such a X ray radiography, ultrasound, computed tomography(CT) ,MRI, etc.Dr Uditha Kodituwakku has chosen Radiology for her MD after her MBBS degree was later sent on a scholarship  for specialising to become a consultant radiologist for overseas training to Basildon University and Barts trust in UK .On her return she was a Board certified consultant Radiologist since year 2010 when she was posted as the consultant Radiologist at the  Anuradhapura teaching hospital where she developed and expanded her skills in the field gaining enormous experience .

Dr Uditha has had her education at the Weeraketiya Central College a mixed school later named a Rajapaksa Central College where she had excelled as a student. She had affirmed that there are many past  students who had climbed the ladder to stardom are occupying high positions scattered over the world.The father’s passion was for all the children to qualify with university degrees.The proud parents had watched how She walked up to stage receive prizes which was a constant occurrence at all prize givings.She was called upon  to sing at all concerts and events in school.It need to be emphasized that she had been always the first in class, unbeatable in studies winning prizes at successive prizegiving’s.

.Mother had been inherited with amazing singing talents from her mother.She affirms it is mother’s hereditary affiliations that she had inherited in her singing abilities.She had shone in singing while in school too, to elaborate on it she has had a huge trend.In addition it is learnt that she had been a prolific writer while in school had won awards in all Island competitions.

Born to parents who were Principals’ and teachers.There had been four siblings one elder brother one younger sister and a younger brother.However it was  daughter Uditha who was affectionately attached to her.The parents had departed last year who She had looked after very well for her it is still unbearable and  still bereaving her loss. At a recent  FM Lakhanda interview in the program “Prema Tatakaya” she confessed that “mathakayan samaga jeevathwenawa namuth sipagannata behe”.During the program she recalled the pleasant times she had in school with the colleague students with many she is still in touch been close friends.She had sung on school stage many times one particular song “Piyaman Keruwemi” a duet by Samitha Mudunkotuwa and Somatillake Jayamaha which likes so much had sung about ten times in school functions as a solo song, the words of the song are all were by heart to her. .She affirmed that as her parents had  taught their pupils with dedication and sacrifice as teaching their own children,  similarly the teaches at her school  Weeraketiya Central College had offered her in equal proportions. Her husband Sanjeewa Rajapaksa also had been a bright student in the same school  had entered medical college together.During the discussion at ITN Lakhanda she quipped that the relationship had begun when the duo had met at an English class in Beliatta.as medical students they need a good English knowledge. The duo had entered the Karapitiya Teaching hospital, had been accommodated in two hostels.Sanjeewa was used to take Uditha on the pillion of his push bicycle to her hostel after days lectures.This had been brought to the notice of the Principal father who had not liked it but had suggested to get the marriage registered that was in the third year in the faculty. However they had really got married three years later with a proper wedding ceremony. 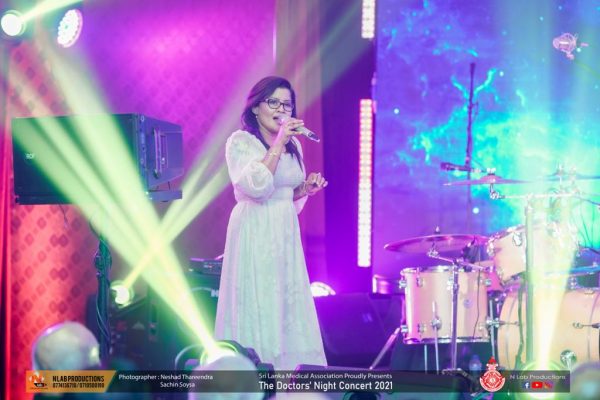 After passing out the husband had got further qualified in MD in the field of Cardiology, who had also persuaded her too to study by paving the way for her too by providing incentives like paper work ,books etc,.In fact the duo with the Son had gone to UK for the MRCP in Cardiology and Radiology respectively to become consultants after completing their postgraduate MD’s..She did add that husband Sanjeewa is really a hard working cardiologist works so hard that he barely gets six hours sleep only with an enormous exertion.

On her return after her long stint in Anuradhapura Teaching hospital appointed the Consultant radiologist in the Ministry of Health   presently is attached to the NHS. Dr Uditha having won the confidence of many often called upon by patients at private hospitals for consultation at Ninewells maternity hospital,Joseph Frazier Memorial hospital,Asiri group of hospitals,Hemas ,Nawaloka,Kings hospital etc.In this aspect Dr Uditha is very busy as a sought after  consultant Radiologist.

Owing to her knowledge and skill she has been regularly called by many television channels to explain on how to prepare for a scan, CT scan or an ultra sound.Dr Uditha has explained in these live television programs whether there is a real necessity to take such a procedure.Prior to taking the decision the radiologist needs to clarify many issues like what type of medicines the patient is presently taking before deciding whether a scan report is really essential.She had spoken widely on programs like “Jeevithayata Ida denna” in the People’s channel Sirasa TV and on Charana TV “Uda ira Sahurdaya”  and also on Shraddha TV ‘doctors segment’ also to elaborate on scans which were well elucidated which are very useful for the layman.

Apart from her above involvements Dr Uditha is an active member of the Sri Lanka College of Radiologists in which she holds the post of Honorary Secretary.For the World’s Radiology day in the year 2021 she had to address the forum as  Honorary Secretary to deliver the key note address held at the Sri Lanka Foundation Institute.

Apart from her busy schedule as a Consultant Radiologist at the National Hospital she has innate skill and ability to sing though with hereditary affiliations. Her son twenty years old Savin Rajapakse has acquired hereditary affiliations having inherited Mother’s expertise.He is an Advanced Level student at Ananda College Colombo 10. He has already recorded a song “wara malak wage ewith” to the melody and music of veteran Aruna Gunawardena , for the lyrics of Dr Asha Abeysekera.Savin is destined to follow mother’s footsteps. 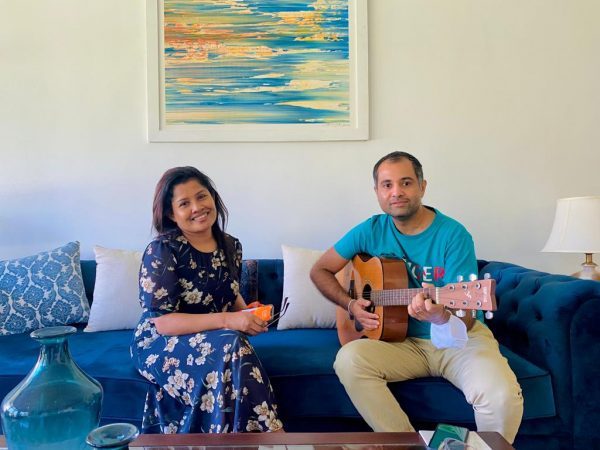 Dr Uditha Kodituwakku has to date recorded many songs mostly solo songs along with attractive videos. The only duet she has recorded is with veteran Vocalist Dyan Witharana.This is of a somewhat of a significance as two from two different professions have sung the duet “ Wenasa” recorded last year which is already a ‘hit’ ,the melody and music was of maestro Rohana Weerasinghe, the lyrics of another stalwart Mahinda Dissanayake.

Two other solo songs that Dr Uditha had recorded with videos are “Rana viru daruweku rakina suwa viru Ammage shokalapaya” , “badagini unata handanna epa puthe”the music and melody by Anura Wanniarachchi , the lyrics by Jayantha Sarath Wimalasiri. Both songs are dedicated to two army personnel who had been killed in the war explains how the widows are struggling to bring up their sons.In the former song the lyricist had been in her hospital staff who had told Uditha to try. The widow in the lyrics is also a doctor ,both songs are based on true stories about  the deaths of two army personnel during the cruel war,which Dr Uditha had sung with a feel which in addition to the videos were sung live many times in some television channels.Consultant Radiologist has quipped that she has a wide circle of loads of friends has an aptitude to get friendly soon.She loves travelling which she enjoys when the slightest opportunity arises not only within Sri Lanka but overseas too..

With her popularity as a vocalist Dr Uditha is often invited to participate in some chat programs in many  television channels, when she apportions her time with difficulty as for her passion which is in her blood in a way a god’s gift to relax her mind to be away from her frenzied duties as a consultant radiologist which itself is always very hectic.

All her patients and music fans would wish her overwhelmingly for her dual professions as a consultant radiologist and as a vocalist.