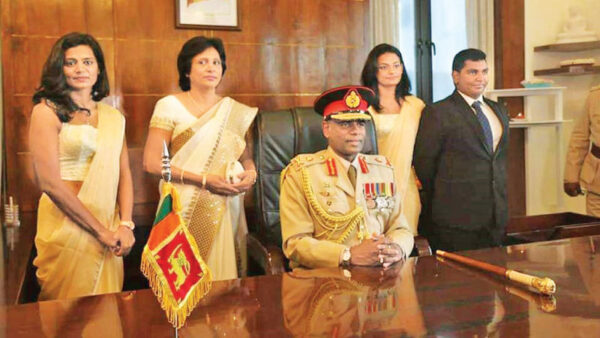 General Mahesh Senanayake with his family on assuming duties as the Army Commander.

Gen. Senanayake followed CGSC course in 2000 and bears the honour of being the first-ever Sri Lankan Army Officer to receive such an international honour. In 1973 the United States Army Command and General Staff College the Kansas City Chapter of the military order of the world war and the Alumni Association now known as the CGSC Foundation jointly established the International Hall of Fame.

It was also an honour for the country to have the Sri Lankan National Anthem played at the event.

Speaking at the event Commandant of the United States Army Command and General Staff College Lieutenant General Theodore D. Martin said, “Our International Hall of Fame inductees represent the pinnacle of professional achievement and senior uniform leaders and I am thrilled that our students both US and international, will bear witness to this special recognition.”

More than 8,400 international students have graduated from the prestigious US Army Command and General Staff College so far from 166 countries. Lt. Gen. Martin made special note of Gen. Senanayake’s contribution and commitment to the issues of the displaced and reconciliation. “His contribution towards the resettlement of internally displaced persons and reconciliation process following a 27 year civil war in his country is truly noteworthy. He was a trusted and important partner in bilateral cooperation between our two countries.”

General Senanayake said, “I am extremely happy and honoured as a Sri Lankan, to be inducted into the International Hall of Fame, which only for a very few accomplished military and civilian members who have reached the pinnacle of success in the military have been fortunate to receive. Since 1973, only 287 global military leaders received this prestigious honour and I am humbled and proud to have been able to bring this prestige and fame to my country. I am grateful for the knowledge, wisdom and experience I received from CGSC this was definitely instrumental in charting out my military career and I am grateful for the CGSC for this honour and recognition.”

General Mahesh Senanayake, is a past pupil of Ananda College Colombo and was enlisted to the Sri Lanka Army in 1981 as a Cadet Officer and in 1983, passed out as 1st in order of merit, while also winning the Sword of Honour.

He has been widely acclaimed as one of the best Commanders, a highly decorated Four-Star General whose distinguished military career spanned over 38 years of an outstanding tour of duty. His exceptional leadership, recognized intellect and incomparable valour as a combatant commander had been significantly influenced to achieve decisive victory and sustain enduring peace in Sri Lanka. Given his accolade as the respected military diplomat, exceptional communicator, a new generation of military thinkers and strategist, he has been often invited to share his strategic wisdom in international forums across the world. He was actively involved in all operations in the North and East and was also instrumental in introducing the Long Range Reconnaissance Patrol concept to the Sri Lanka Army.

General Senanayake has held a number of appointments, including the extra regimental employment at the Sri Lanka Military Academy as an Officer Instructor. He also served as the Regimental Centre Commandant of the Special Forces Regiment, Commander 211 Infantry Brigade – Vavuniya, Commander Special Forces Brigade and the General Officer Commanding 52 Division -Varani, Jaffna.

He also held the position of Director of the Army Command and Staff College and Director of Planning at the Army Headquarters during the decisive period of the humanitarian operation, after he was promoted to the rank of Brigadier.

Gen. Senanayake has been honoured with the Rana Wickrama, Rana Soora, Vishishta Seva Vibhushana and the Uththama Seva medals for his unblemished services in the Army and his gallantry and bravery in the face of the enemy during the operations.