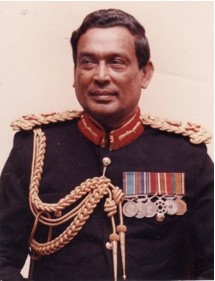 It has been nearly three months since I launched my book “Till the Mountains Disappear: The Story of St. Joseph’s College”. The book is ongoing a third print of its 1st edition and has been widely circulating not just in Sri Lanka but also in many countries domiciled by Josephians, a few generations ahead of me to the ones half my age! I thought I must share a rather interesting story which happened during the preparation and the day of my book launch, i.e., Tuesday, January 19, 2021.

The story is on an eminent Old Joe, General Gerard Hector de Silva. General Gerry de Silva was a distinguished student of the late Rev. Fr. Peter A. Pillai. He had excelled in Cricket and was a pioneer Swimmer under the famed Guy Tiedeman.

Recalling his memories as a swimmer, the General once told me, “I remember distinctly Guy Thiedeman’s encouraging remarks as Josephian Swimmers were far behind other competitors in the initial stages of competition and became the laughing stock, “I will make SJC Public School Champions in five years.” In our fourth year of competition, we won the Public Schools Championship in 1956 which we proudly held for 12 consecutive years and ascended greater heights by becoming National Champions in 1957, the first ever school to do so, establishing four new Ceylon Records”. The Rome Olympian Tony Williams and Desmond Templar were good friends of the General.

General Gerry was one of the four candidates out of 4000, who got selected to be trained at the Royal Military Academy Sandhurst, UK. One of the other three was the eminent late Lt. General Denzil Kobbekaduwa, who would be a lifelong friend of General Gerry. “It was simply an amazing journey from Suduwella to Sandhurst!”, said the General. The General would rise steadily through the ranks and his knowledge and expertise were well tested during the insurrections in 1971 and 1989, and of course during the Civil War since 1983. After his appointment as the Commander of the Sri Lanka Army in 1994, he was able to re-capture the Jaffna Peninsula from the LTTE. On retirement he served as the Ambassador to Pakistan. Last year, President Gotabaya Rajapaksa appointed General Gerry as the 5th Chancellor of the Kotelawala Defense University (KDU). He also has authored two books: A Most Noble Profession (2012) and War Heroes Killed in Action (2016). The late Rector, Rev. Fr. Stanley Abeysekera conferred him with the Josephian Award of Excellence in 1992.

A few months before the book was ready, I met General Gerry de Silva at his residence. He showed a great interest in the manuscript. We had a lengthy discussion on SJC, its history and of course his and my experiences in different times of SJC. He was very pleased in that discussion and he mentioned “This conversation certainly brought back many good memories!”. As I was about to leave, he asked me, “Avishka, when do you hope to launch the book?”. I knew that then that the General was extremely interested in my endeavor. After giving him the proposed date, I asked “General, it would be a great honor to me and the audience, if you could grace the occasion and deliver the keynote address”. The General very humbly smiled and said “Yes, of course. I can do that for you!”. I must say, that I am forever grateful to this war veteran, for his caring attitude towards me, an inexperienced, budding young writer.  Being many years my senior, I must say the General got along with me extremely well and his support to me to reach this feat, is not just praiseworthy, but shows the great caliber and class he had attained.

A week after I met the General, I received an email from him. He had finished reading the book and was highly impressed with my effort. His words of appreciation, deeply touched me and made me feel very grateful and humbled.  I called him over the telephone and he expressed that he will be more than happy to deliver his review on the book at my launch. The launch was initially set as October 28. However, with the progress of the 2nd wave of Covid-19, I was forced to postpone the date. By December things began to settle and the curfews were lifted. Then came Christmas. But this time was no White Christmas nor a Blue Christmas. New year too hardly seemed exciting. With the dawn of January people started to have functions, weddings, get-togethers etc. People were willing now starting to socialise (with masks and social distancing of course). After checking with the Chief Guest and others including the Ceylon Chamber of the Auditorium, we decided that January 19 would be ideal. The General was free as well.

There is a clash of Dates. The Convocation of the General Sir John Kotelawala Defense University of which I am the Chancellor, has been fixed on 19th Jan from 0900hrs to 1800hrs at the Air Force facility in Atthidiya. We may have to amend date & times of the SJC History Book Launch for a more convenient arrangement. The dates of the Convocation have been fixed by the Vice Chancellor in liaison with the Board of Management and HE the President. I was informed of the arrangements a few minutes ago and hastened to inform you. I tried to phone you on the telephone but was informed that I dialed a wrong number. Can I have your number again please? Sooner the better!

With the launch scheduled a little less than a fortnight from that day, with the Auditorium being booked and confirmations received from most of the guests, I was in a rather difficult situation. However, as the General was keen to grace my launch. Instead of trying to change the date, I thought of another plan. I changed the timing from 5.00 pm to 6.000 pm and was thus able to move the General’s Speech to around 7.00 pm. I then presented this suggestion to the General, who was agreeable.  I then asked him “General, since you will be coming from the KDU Convocation after presenting hundreds of prizes and it’s a lengthy programme. Will this be a problem to tiring to deliver the keynote address?”.

The General, who had been retired for over 20 years, immediately responded by saying “Of course Avishka. I’m a Soldier!”.

Well, I felt quite dumbfounded with the General’s response. I was thinking, “Wow!  Now that is some real passion. I doubt whether I can match that!”. It was a great feeling to have such an eminent man, a gentleman to the finger tips, a respected war hero, say something like that and to have such enthusiasm to attend my launch. 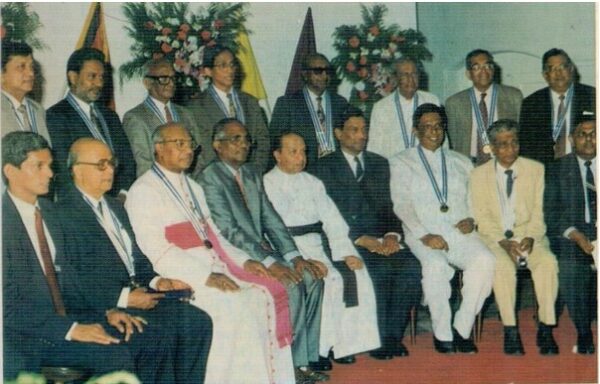 General Gerry at the Josephian Prize Giving as Guest of Honour along with Fr. Stanley Abeysekera and recipients of the Josephian Award of Excellence 1993.

On the eve of my launch, at the final meeting with the organisers, I repeated this endearing story., I then requested my compere, Dinidu Edirisinghe, who was my childhood friend to share this statement with the audience. He too was very happy to hear such statement and agreed to include this in his script.

After six and a half years of research which resulted in this book, the day of the launch arrived. I arrived at the auditorium with my classmates and we rehearsed the entire programme. The event was set to start at 6.00pm.  I expected the General to arrive around that time as he had planned to leave the Convocation around 5.00pm. To my surprise around 5.30pm, when not more than 1/5th of the audience had arrived the General graced into the auditorium. I was delighted to see the General arrive so early and I went upto him, greeted him and ushered him to his seat myself. He was later joined by some of his friends like Dr. Gamini Goonetilleke, Dr. Maxi Fernandopulle, Dr. Ranjith Almeida, and Mr. Ainslie Joseph, all eminent Joes of yester year. With the arrival of all the former Rectors and Bishop Anton, our Chief Guest the event began.

The programme progressed according to plan ably compered by friend Dinidu. As it came to the time of the General’s review. The compere very gracefully introduced the General to the audience and the welcomed him to present his review. The General came upto the podium and his first words were, “Ladies and Gentleman I am proud to be a Josephian!”.  The way he delivered that remark, the sentiment and expression certainly gave a beat to every heart string of all those who were present. A few minutes later, the General had very generously reviewed my book and left back to his seat. Then my compere, related the story of “I’m a soldier” to the audience, instantly a large hurrah of cheers and a long applause followed. I am certain this story will move all Josephians. Such alumni are precious for institutions. Their stories must be told and written for posterity again and again, till the mountains disappear!