Commonly referred to as the “Misty City” (Mandaram Nuwara in Sinhala) as the location is shadowed by adjacent mountain ranges and mist engulfed, Mandaram Nuwara is a spectacular tiny hamlet in the Central Province of Sri Lanka. Located at the foot of *Pidurutalagala Mountain (Mount Pedro), the tallest mountain in Sri Lanka in the Nuwara Eliya District of Central Province, a unique feature of this scenic hamlet is that it has never seen the first rays of the solar rays nor the remaining rays because of its mountain-locked location. Legends as well as folklore weave through this hamlet…

Enclosed from the west by Piduruthalagala Mountain and from the east by the Balagolla mountain ranges  and constantly enveloped by a veil of ethereal mist and the seamless presence of nature, the breathtaking hamlet of Mandaram Nuwara evokes images of a faraway land, a mystical terrain occasionally disturbed by the subtle sweep of the wind … Grasslands dotted with wildflowers, blanketed by a lush green carpet of verdant vistas, gushing cascades with a curtain of milky white froth and rock pools with icy cold water, streams with crystal clear water and sandy beds strewn with massive rocks, terraced paddy fields, breathtaking vistas as far as the eye can see, spellbinding magnificence of the panoramas, the environs are awe-inspiring and similar to a fairy tale village…

Mandaram Nuwara is entwined in myth and legends. According to one legend, the inhabitants are descendants of the queens of the harem of King Sri Wickramarajasinghe II (1798 – 1815), the last king of the *Kandyan Kingdom as well as *Ceylon. According to folklore, when the King and the Queen were captured by the British Colonials, the queens of his harem had fled to this scenic hamlet and settled down here. The inhabitants of Mandaram Nuwara are descendants of those queens. According to another legend, this charming hamlet surrounded by misty mountains and waterfalls dates to *Rawana era. With the mist engulfed atmosphere and spectacular vistas, Mandaram Nuwara is similar to a quaint terrain where the concept of time is of no concern. Legends weave through the crossroads of this terrain. According to folklore, during the *Kandyan Kingdom, the village was known as ‘Mandaram Pura’ as it was used as a hideout by kings of the Kandyan Kingdom.

The terrain of Mandaram Nuwara is endowed with several cascades. The magnificent Kolapathana Ella, a breathtaking and multi-step cascade that begins from a stream originating from Pidurutalagala mountain is a waterfall popular amongst visitors.

Due to its geographical assemblage, the village receives rain throughout the year. Inhabitants of Mandaram Nuwara are friendly hospitable people. The villagers produce treacle and jaggery (an unrefined sugar product made in Asia and Africa, a traditional non-centrifugal cane sugar) extracted from the sap obtained from the flower of the ‘Kitul Palm’ (Caryota urens – a species of flowering plant in the palm family, native to Sri Lanka, India, Myanmar and Malaysia). 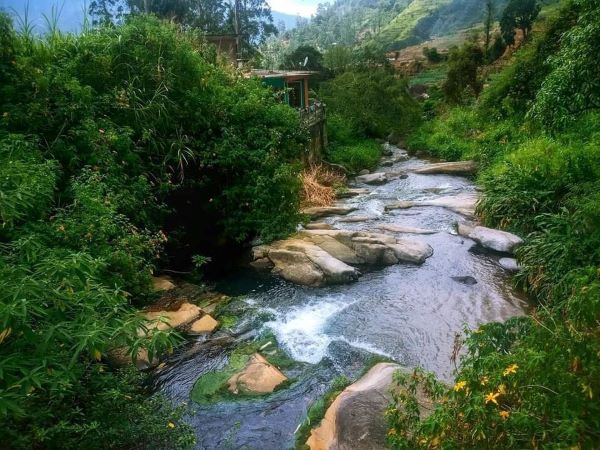 As the location is spectacular and pristine, it is essential to keep the terrain immaculate.

Take only photos. Leave only footprints…