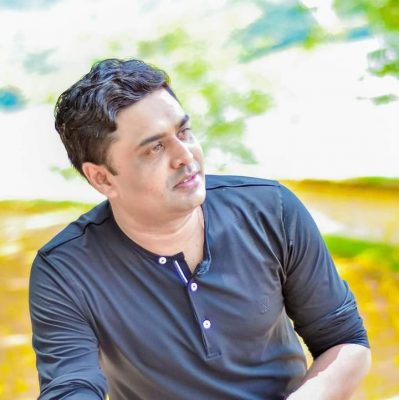 Nadeera Sri Ekanayake renowned as “Nadeera Sri” is Multi skilled already a genius at the apex of fame as a research Lawyer in legislative drafting in Parliament of Sri Lanka, International communications, lyricist ,musician and vocalist. Nadeera is a native of Polgahawela in Kegalle district had attended Wijayaba Madya Maha Vidyalaya, Maho.Nadeera had commenced music while in school though not affiliated to any hereditary inheritance. He had sat for the Advanced level with music as a subject in the arts stream, the teachers had been Madushanka Wijekoon and Rohini Dassanayake.

Nadeera had In year 1993 while still in school had formed a music group “C Plus”. The first musical group in that era from Maho area had comprised of many talented musicians. The first experience was when we organised with Sunil Edirisinghe “Mandagini” concert which was appreciated by many.Nadeera considers Sunil Edirisinghe as his music mentor. Thereafter organized more similar concerts. Although obtained admission to the University in the music field opted to enter the Teachers Training college from where he qualified to become an English teacher when he thought for a couple of years.In mid-year 2016 the classical video song “Mage Adara Sumudu daluwa”  released targeting the youth with his own lyrics and music melody was heard often on FM radio and television channels.This was the commencement of his music career as he had innate abilities for vocals and playing many musical instruments which assisted him immensely in composing music though not inherited. Thereafter a number of his songs mostly in videos were released to date.

Entered Law College in year 2006 sworn in year 2011as an attorney at law.Subsequently Nadeera had undergone a Master’s degree  in Law at the General John Kotalawela Defence academy soon with his enhanced knowledge in Law had found employment as a Lawyer (LLM reading MPHIL in Laws) in the Parliament of Sri Lanka, basically as a Legal researcher having studied Post graduate  competency certificate in Legislative drafting at Pride Lok Sabha Secretariat in India. Nadeera in order to widen and enhance his future scope in his present vocation is following International communications China, Beijing Communication University, where Nadeera had completed the first semester having visited Beijing while studying on line but visiting Beijing at intervals.In addition Nadeera lectures in Law adding another feather to his cap as an inspiring  multi-faceted young individual still just forty years old. An achievement that needs to receive accolades, ovation and acclaim. Nadeera had quipped that currently “my studies focus mainly on keywords like Public Sphere and Network Society.Had affirmed that he is amazed by the Chinese experience to view how they allow all new technologies to drift in while upholding “Internet Sovereignty” ,all things possible due to the rule of law and order.They have created “Network Society” to fully facilitate the Public morale, commonly is their point of view inevitably to bring about an orderly form of citizenry.

In year 2017 after recording his first song in year 2016 Nadeera Sri recorded his second video under the label hirutv.lk  “Nuwara Duratheethe” to his own lyrics and own music but the music was directed by maestro musician Suresh Maliyadde which was a hit . In year  2018  Nadeera Sri launched his next video song “Prathama Premaya” to the lyrics of Dharshana Rasika Abeysinghe while the music composition was also his own. Subsequently Nadeera recorded a Mp3 song “Vinadawanna Awe” to his own music composition to the lyrics of Shehan Galahitiyawa. Though Nadeera would wish to record more songs the time factor is a barrier with his busy schedule at the Legislature services department in the Parliament of Sri Lanka,  law lectures and his commitment to the studies at the Beijing Communication University. Nadeera Sri should be hailed and admired for successfully attending to all the above areas conceivably with distinction. All his colleagues would wish him grit to continue his above work in the same vein as his future looks dazzling as a youngster.