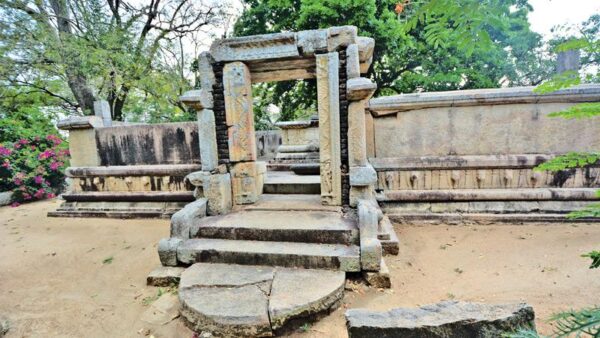 One of the best preserved Bodhi-garas (Bo-tree house) in the country is in Nillakgama, Hettigama. Our journey seeking the Bodhigara, however, was met by much more than what one would expect – rocky crevices and tanks blossoming with water lilies. We took a secondary road rather than a trunk road. We took the Ibbagamuwa-Moragollagama secondary road turning left from Saliyagama and driving down another 18 kilometres on the Galgamuwa road via Ehutuwewa. 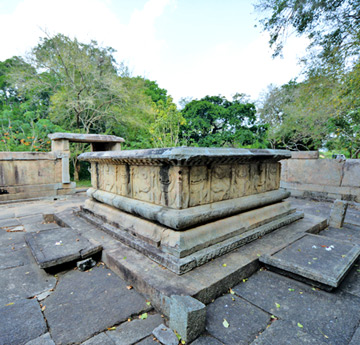 Upon reaching Gallewa on the Ehutuwewa-Galgamuwa road, a Department of Archaeology signboard directs to a turn off to Bodhigara. Turning right to the narrow gravel road flanked by shrub bushes, we went through chena cultivations and a wooded area for about six kilometres to arrive at the Nillakgama Bodhigara, Hettigama.

We parked the vehicle in the shade of a huge tree just a few yards away from the Bodhigara and walked towards the site surrounded by clumps of greenish grass and an elephant infested shrub jungle.

The site gets no pilgrims today. It is silent, but in its heyday, this was a main spiritual hub of a sacred Bo tree worshipping site. We glimpsed the pink colour stone structure through the branches as the late morning sun rays filtered through a huge Kone tree at the site.

Nestling in a wooded area beneath the bund of the village tank of Hettigama, the Bodhigara seems to be made of granite. It belongs to 8th century of the Anuradhapura period. Once this place was known as Dalada Maligawa and Pattirippuwa among the village folk at Nillakgama.

Buried deep under the forest, the remains were examined by H.C.P. Bell, the Commissioner of Archaeology in 1895 with the help of villagers, and his report carried a brief descriptive note supplemented by some fine drawings. 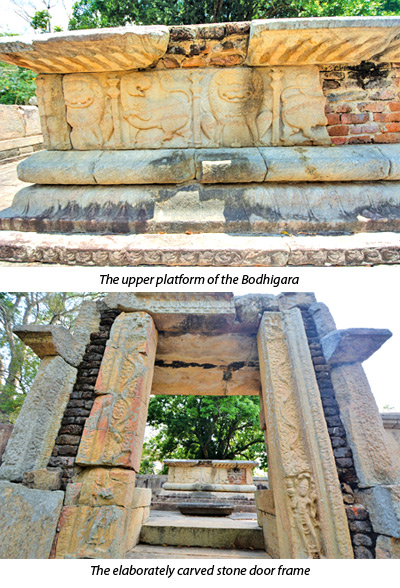 The place was then deserted in the jungle for more than 60 years and treasure hunters had ravaged it digging deep pits in the centre and destroying the upper terrace throwing carved stones about in search of treasures.

Again, after more than 60 years, shedding light on Nillakgama in 1954, Prof. Senarath Paranavithana, commenced the conservation of the archaeological site.

He has said that it was not an easy task to conserve the remaining artefacts and structure which had been ransacked by treasure hunters. The jungle also contributed to the ruination of the monument when branches of a Kone tree crashed down damaging the door-frame of the western side and scattering pieces of the structure.

The shrine was reclaimed and conserved in less than a year by the Department of Archaeology under the supervision of Prof. Paranavithana himself as the Commissioner of Archaeology. He was surprised by the creative craftsmanship of the Bodhigara.

Paying homage in the shrine on the upper terrace, we observed all the magnificent stone carvings, walking to every nook and corner of the stone structure considered as one of the best carvings chiseled by Sinhalese sculptors.

A major feature which fascinated us was the structure of the monument which may be divided into two component parts. The outer shell, as it were, in reality the lower platform, has a parapet wall with two entrances on the East and West, giving the appearance of a fair-sized building.

The platform, which it encases is the actual terrace on which the Bo tree had stood. In its original state, a devotee would have viewed the sacred tree rising from within one building.

The present height of the walls of the outer platform is 9.6 ft. The platform itself is 34 ft. square. Its chief ornamentation is centred on the entrances, and the display and arrangement of designs are unique in many ways.

The most striking feature is that the door frames are elaborately carved while some of the principal designs normally found on the moonstones themselves are absolutely plain. For the most part, one is struck by the simplicity of the building: the wall surface of the parapet is in fact, wholly devoid of ornamentation.

A structure on which so much of artistic effort was lavished must have been dedicated to an object of great religious veneration. Prof. Paranavithna said that there are no door frames so elaborately ornamented as those found at Nillakgama.

Entering through the Eastern doorway, we came across the inner platform that is 13 ft. square and 6 and 1/2 ft. high. It is sculptured with lion reliefs, placed right round the upper portion. At the bottom is a row of swans (hansas) and in between are lotus petal mouldings.

Four stone altars 4 ft.by 2 and 1/2 had been placed on each side for the purpose of offering, but one of them is now missing. The floor below the terrace is paved with irregular stone slabs. Here too, there are stone pillars which had supported the roof of the structure and broken roof tiles were found on the spot.

The obvious reference was to a special number from among the frieze of beautifully sculptured line of elephants on the lower portion of the outer platform. Archaeologists have identified that the structural remains are those of a Bodhigara.

Bodhigaras are known only in India, as at Sanchi and Amarawathi. In Sri Lanka, the Sri Maha Bodhi Maluwa in Anuradhapura has long been a shrine.

The Bodhi tree which stood at the centre of the upper platform could have sprung from the seeds of the Anuradhapura Bodhi tree immediately after it was planted during the reign of King Devanampiyatissa.

The ancient chronicle Mahabodhi Vamsa gives a list of the places where these Phala-ruha Bodhis exist, but it does not mention Hettigama, Nillakgama or any other village in its vicinity. It is also not clear why this elaborately carved magnificent Bodhigara was built on the edge of the enchanting village tank.

Archaeologists look forward to find out the ancient name of the site as the inscriptions or any other evidence so far have not come to the archaeologists’ aid in their quest.

Looking at the vicinity of the Bodhigara, one cannot find any sign of a building except a tank bund, but at the site, we met a villager who came to collect firewood. He told us that there is an ancient stupa which had been buried and dug out by treasure hunters, nestled a few yards away from the Bodhigara.

Shading our eyes against the scorching sun, we gazed at the narrow foot path into the forest in the direction given by the villager.

However, venturing in, we were surrounded by stone ruins and mounds of earth where ancient bricks and parts of carved stone altar slabs beckoned at the grandeur that must have pervaded the Stupa adjoining the Bodhigara at one time.

Archaeologists now have the task of excavating around the Bodhigara to find more clues on the history of the Nillakgama Bodhigara.