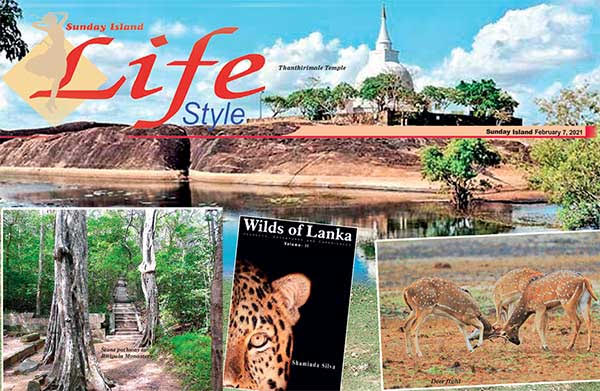 ‘And from the Peak and table-land

That brave the vast dome’s immensity,

From the tree- girt shore and the glittering sand,

The emerald Island calls for me.’

The physician, antiquarian and wildlife lover, Dr. R.L. Spittel pays homage to our emerald-isle in his verse Hail Lanka. He is remembered today by Shaminda Silva through his latest compilation, Wilds of Lanka (Volume II). A decade since his first book ‘Wilds of Lanka’ (Volume1), dedicated to wildlife and several national parks, particularly Yala or Ruhuna National Park, the author brings to his readers its sequel which documents Wilpattu National Park and several other historic sites in the northern plains of the island including the Thanthirimale Temple, Ritigala Monastery, Madhu Church, Doric Bungalow and the Mannar Fort. The wild landscape of fauna and flora interspersed with culture, religion and folklore is a bold attempt by the author to fill a literary vacuum with a concise, easy to read publication which celebrates the wilds of Lanka. “The spark for nature was always in me,” says lawyer Shaminda. It was nourished by his parents who enabled their young son to live in a natural environment of birds, frogs and numerous pets as well as his stay, as a young child, in Nigeria where his father worked. The used Zenith camera with a 500mm lens which he bought with his pocket money at age 15 was a “breakthrough” while the numerous camping trips he made with his Law College buddies drove him deeper into the wilds, he adds with a smile.

‘Sharing one’s knowledge of the jungle, its stories and moments captured in a photograph is totally the opposite of advertising oneself and the expeditions made creating a path for its destruction. I would be ever grateful to the explorer, if the most valuable of beautiful places are kept only as photographs in private albums and not as ‘facebook’ posts or stored in the ‘clouds’, notes Shaminda in the opening chapter of his book. The readers are invited to undertake a journey through the wilds and the cultural heritage of our island with the author who strives to champion ‘sustainable footprints’ across them. His reference to W.T. Keble’s description of our island home, ‘hung about with history and legend like an old decayed jungle tree made beautiful with decorating creepers’ urges the modern islanders to revisit their tropical land in all its natural glory long before non-perishable synthetic jungles became the norm.

A product of many years of travel, the 306-page book with complementary photos reaches to a wider audience with its affordable price and size. It could easily fit into a hand-bag or sit on a bedside table, enabling practical reading. The book is a mix of thrilling encounters with bears and leopards, tales from iconic wildlife experts of yesteryear, demons of Ritigala, pearl fisheries of Mannar, crumbling forts, bullet marks of the war, forgotten lighthouses, churches and much more . It serves as a quick travel guide as well.

The author’s reference to several historical authorities, good many from colonial times which are today found largely in collectors’ or public libraries open important windows to long gone chapters of this fabled island of ours. In this exercise, the writer says, “If these books are lost, the public may never be able to enjoy these publications, especially vivid descriptions, fine language and natural flow…. If not for some of these facts which are wedged between the pages of these publications dating back more than hundred years, we would certainly have lost a part of our country’s pride and heritage. Hence at least in a very limited scope, this humble attempt is to fill this gap.”

aning land of the villus or lakes) enlightens them of those like Dr. Spittel who strived to declare Wilpattu a National Park, Percy de Alwis regarded as the ‘greatest Park Warden of Wilpattu’ who rose through the ranks to become
Assistant Director (Administration) of the Wild Life Department and S.D. Saparamadu, one time Wild Life Director.

The discussion on the geology, climate and archaeological importance of the region makes reading the book a fine experience. Discussing Kudiramalai, a small area of land jutting out to the sea which is now within the perimeters of the Wilpattu National Park, he explains the origin of the word “Kudiramalai”, believed to have derived from the Malabar language which translates into English as ‘horse mountain’. When one looks at the shoreline from the sea at a distance during a moonlit night, one could easily see a silhouette of a horse swimming in the sea, says the writer, who shares his own experience of viewing this spectacular sight from a naval patrol boat.

The chapters which follow on Thanthirimale Temple, Ritigala, Mannar and Talaimannar provide stimulating reading. The book however, as the

author points out, is not meant to be admired just for its photographs. “The photos are only for the

purpose of adding colour and icing and nothing more. “The book is to be valued largely for its written content,” he says. Shaminda also urges the reader to take it “in the spirit in which it has been written.”

Taking less traversed paths of the country had improved his health and helped him navigate through his demanding practice as a lawyer, reflects the author. This was made possible by his wife and two children who stood by his side. Endorsing the words of Spittel – “I do not know any place in Ceylon of which I can say, is the most beautiful, the landscape is too diverse for that,” Shaminda adds that living close to the nature could make a person more mature and sensitive and enhance his professional capability.

The author’s love of the environment is unmistakable throughout the book. His plea for responsible citizenry and administration to conserve what remains of our natural/cultural heritage before it is forever lost will resonate with like-minded Lankans. “It is necessary for all of us to keep in mind that we are not the owners of the earth but are simply trustees appointed to take care of it for the next generation.”

The book does not seek what the author calls “mass scale revenue” and hence may only be purchased on orders. For inquiries call Sampath on 0772 040409