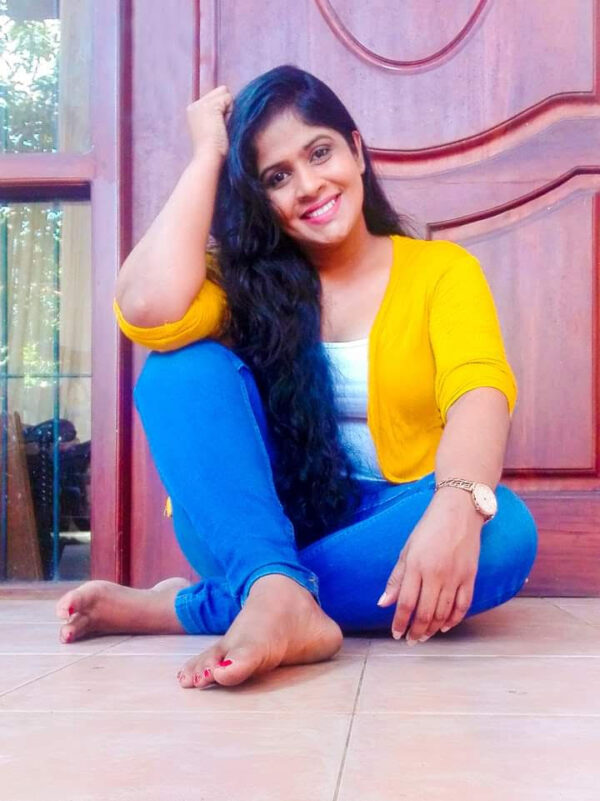 Sathmani is the solitary daughter of amazing musician Kumarasiri Pathirana who has had a trailblazing music career having scripted lyrics and own music compositions  for nearly four hundred of his own songs .Sathmani Pathirana may have definitely born with hereditary music affiliations to father’s musical talent but as she has achieved more academic qualifications to date in music related field it is obvious that Sathmani may have been born with innate aptitudes in musical fields as well.

Sathmani Pathirana is blessed with an elder brother a music composer himself, a younger brother in the university the youngest brother still studying. All siblings are music minded could sing well.Her mother is Chandra Amerasinghe who had with more or less a lone hand successfully navigated to triumph over family commitments needs to be applauded for the success in the family. As all relatives live in Polonnaruwa owing to this criterion all members in the family work as a cohesive group in times of catastrophes.

Sathmani has had her initial education at the Seven Day High School in Kandana after which until completing her education had studied at Samudradevi Balika Vidyalaya in Nugegoda until Advanced Level. She had opted to study in Arts stream as music as her main subject. During her tenure in school sha had been a main musician in the school orchestra apart from her vocals she had been a competent guitarist. Her presence in the school orchestra group had helped enormously her school to clinch awards at inter school music competitions.

After her advanced level she had pursued a course in Human Resource Management obtaining a diploma certificate after successfully triumphing in it. Concurrently to date she is studying seeking a music diploma at the University of visual and Performing University.Also simultaneously Sathmani is following a course to triumph to be a music Visharada. It is learnt she as very keen and craze for dancing is following Bharatha Naatya Indian dancing which she proposes to continue with keen intensity.

When Sathmani was barely five years old she had recorded her first song. Thereafter two ‘Lama songs” had been recorded for her elder brother’s maiden Children’s cassette “ Sindu  Podiththa”.After this triumph she had been invited to sing in SLBC and SLRC Children’s’ programs where she had made a name for herself at such a tender age. At this juncture she had recorded her own childrens’ songs Sathmani with her familiarity with the authorities at the SLBC had applied for A grade singing auditions which she had navigated over triumphantly. Sathmani is now classified as a dubbing candidate for both SLBC and Television channels. She also is called upon by many channels for singing in commercials and gingals. With these invitations Sathmani is invariably occupied in the vocal articulated fields.

Sathmani had been invited to sing for many Teledrama theme songs.

She had been invited to many radio and television channels to participate in musical programs.She had been recently seen in Siyata TV,Channel C ,TNL,TV Derana etc.

In the TV Derana program Leya saha Laya she participated with father Kumarasiri Pathirana where she duetted with father to sing six songs of father and singing her solo song too .This performance was hailed by the presenter Jayantha Chandrasiri. With her propelling popularity sone newspaper articles have been published. In parallel to her popularity  and acclaim a number of newspaper articles have been published with captions like “Sathmani Gee Loweta”.Sathmani with her competency is frequently invited to sing in musical concerts both indoor and outdoor .It is believed to date she had sung to the applause of varied audiences in more than forty musical concerts.

Some of her audio songs could be heard as MP3 songs in songhub.lk.However her first song was recorded and launched last year titled “Katawath Aiye Wednana” to the lyrics scripted by father Kumarasiri Pathirana which according to her has been well accepted by many audiences.Two more songs one with video and the other an audio are to be released soon.

In the above context the music journey of Sathmani Pathirana is well on track with the assistance of musical knowledge and the backing of father and brother each competent music composes.