Sea of Poppies by Amitav Ghosh – by Nimandra Gunasekera 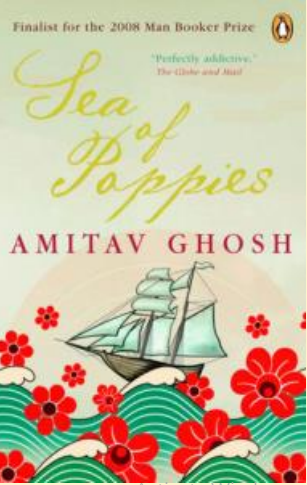 Sea of Poppies is the first volume of the epic Ibis Trilogy by renowned Indian author, Amitav Ghosh.

The story begins in 1838, on the eve of the first Opium War and takes the reader on a tour de force of Opium and Empire in the 19th century.

Set primarily aboard The Ibis, a British ex-slave ship now transporting workers and prisoners from Calcutta to Mauritius; the story revolves around a diverse and unlikely group of people. A poppy grower fleeing her northern Bihari village following the death of her husband, a mixed-race American seafarer and Freedman from Baltimore,
an unscrupulous English businessman and Evangelist trading in opium, an imprisoned Maha Raja, an Untouchable on the run, a ParsiChinese Opium addict, a French Botanist escaping an arranged marriage, a Lascar and a Pirate; the thing that connects them all is secrets.

Rich with detail, the novel is especially notable for Ghosh’s painstaking historical research. The author takes these historical facts and beautifully moulds them into relatable and tender stories of love, friendship and resilience while keeping a grip on the political and commercial intrigue surrounding the East India Company.

The variety of languages and English dialects incorporated into dialogue is masterful, including ship pijjin, a mishmash of English and Hindustani spoken on ships. While some may find this interrupts their reading, it adds such colour, flare, and context to the story.

Sea of Poppies is not only a historical novel of grand proportions, but it also highlights the dark side of early globalization – the violence and exploitation upon which fortunes were made and empires were founded. It also addresses those things we value the most as humans such as dignity, identity, and freedom

As the stories converge, the Ibis becomes a shelter to the various misfits and exiles. Pre-existing divisions disappear and new identities are formed. A crisis on board culminates in mutiny and a heart thumping escape.

The novel closes with Neel the Raja, Ah Fatt the Addict, Jodu to Lascar, Serang Ali the Pirate and Kalua the Untouchable escaping in a longboat towards Singapore, while Deeti the Poppy Grower, Paulette the Botanist, and Zachary the Seafarer proceed towards Mauritius. It makes you want to jump straight into a River of Smoke, the second volume of the Ibis Trilogy Nimandra Gunasekera
Nimandra works in the oil and gas industry, enjoys reading and dabbling in a bit of writing