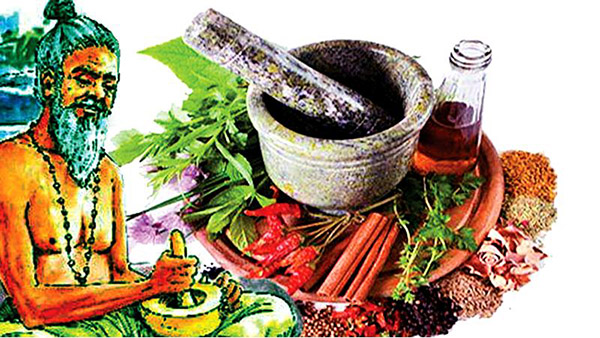 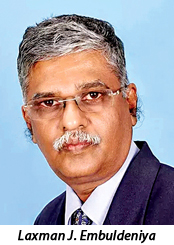 A medical heritage of a country could be cited as one of its best treasures and most powerful weapons. Sri Lanka has proven that its medical legacy was protected by ancient kings as part of governance policy and aspects, such as agriculture, belief system/spirituality and diet encompassing the concept of health.

We can only imagine that if there was a ‘Ministry of Health’ as we have today, in ancient times, how it would have been integrated to ensure the optimum health of its citizens; through what we cultivate, how we cultivate it, through hydraulic sustainability to prevent hunger, disease and being indebted to other countries for essentials, such as medicine and food.

To talk of the pre-Ayurvedic Deshiya Chikitsa (Sinhala Wedakama) medical heritage of Sri Lanka is to talk of a wisdom driven medical tradition nurtured for centuries.

Robert Knox, if he were alive, would have been able to explain to us what he wrote in his book, An Historical Relation of the Island Ceylon where he detailed the medical expertise of the country and stated that this knowledge was with all citizens who were physicians in their own right.

Today this knowledge, even the use of basic herbs and indigenous plants, may have been erased from the minds of the public, because we have not realised as a nation the value of safeguarding it through an education system accessible to all.

Yet, there are still families and persons in whom this knowledge is still alive, emotionally and intellectually, thanks to the childhood learning they have had from their parents, grandparents and great grandparents who have stored this knowledge in practice and in theory, with the aid of books coming down from hundreds of years.

Some of these persons specialised in other jobs take to renewing the traditional medicine knowledge passed on by their families at a time when they feel destiny wants them to do so. Laxman J. Embuldeniya, 56, at Elwela, Matale, who had qualified in the 1980s in Systems Engineering from the British Computer Society, having worked abroad pertaining to technology, maintains that he is one such person.

His father and grandparents from his mother as well as father’s side had functioned as physicians and held a repository of ancient knowledge in the form of books and pamphlets, he said.

For the past 25 years, he has been researching Deshiya Chikitsa (Sinhala Wedakam) techniques passed on by his father and grandparents, using some rare knowledge in Sri Lanka’s medical tradition, for diseases, such as Dengue, Diabetes and conditions, such as Autism and neurological disorders, such as Epilepsy. He is confident that the branch of Sinhala Wedakama he uses can cure Autism. He said he has records to prove he has done it.

Meanwhile, a letter, dated July 26, 2017 signed by the Private Secretary to the then Minister of Health introduces him as follows to the National Medicines Regulatory Authority (NMRA):

“Bearer Indigenous Medical practitioner, Dr. Laxman J. Embuldeniya, has developed a herbal medicine apparently effective for treating all conditions of Dengue Haemorrhagic fever and has demonstrated its efficacy on several patients in Kalutara and Matale.” 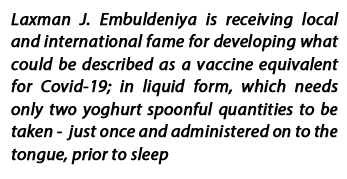 The letter said that he has presented his medical experiments for Dengue to the then President, Maithripala Sirisena and requested an expert committee to assess the efficacy of the treatment.

According to Embuldeniya, he is following up with NMRA now on his medicines submitted for Dengue in 2017, having used the past four years to collect reactions from patients who have taken the medicine.

“Several senior Allopathy doctors knew of my research into Dengue as they had seen how Dengue patients whom Western medical professionals could not cure and sent away for last resort alternatives, such as Bodhipuja took my medicines and recovered in less than 48 hours.

Not a single Dengue patient in the worst case category, who came to me, often sent by Allopathy doctors, died. I have records to prove this,” he said.

“In Sinhala wedakama, it is prohibited to test medicines on animals – creatures who cannot speak. My medicines developed from a strong research backdrop under the Sinhala Wedakam tradition – mainly the Rajapriya tradition (traditions preferred by the king) are administered only on humans.

By the time, the NMRA was informed of my Dengue medicines, hundreds of patients had recovered consuming my medicines. Since then I have further strengthened the medicine based on feedback,” said Embuldeniya, stating that along with Dengue, his aim is to cure any other ailment the patient would have had, such as diabetes and cholesterol.

Now, however, he is receiving local and international fame for developing what could be described as a vaccine equivalent for Covid-19; in liquid form, which needs only two yoghurt spoonful quantities to be taken – just once and administered on to the tongue, prior to sleep.

Asked if it is once in a lifetime treatment like a vaccine is supposed to be, he does not insist that this is so, but said that this is how he has designed the medicine, made from herbal components.

He said he has received queries from foreign doctors, officials as well as Sri Lankans from countries, such as Italy, New Zealand, Switzerland, Israel, Bangladesh and Nigeria.

“I am pursuing these correspondences seriously and discussing with these countries. I am considering bulk sales of this Covid-19 treatment. Several Allopathic professionals in Sri Lanka and abroad had understood the rationale of my work and supported me throughout my research for developing my medicines,” he said.

According to him, around 15,000 persons, mainly in Sri Lanka, have taken his Covid-19 curative and preventive treatment, out of which from feedback, at least 100 – 200 were Covid-19 positive patients who have recovered.

He said that the strength of the herb composition of the medicine ensures that recovery is successful within hours, using the minimalistic quantity rationale as used in the Rasa Wedakam tradition of ancient Sri Lanka.

In the local pandemic scenario, he considers one of his main contributions to be the prevention of the Dambulla market Covid-19 incidence.

He said that following a media intervention by a provincial journalist familiar with the efficacy of his medicine, many vendors in the Dambulla market, who had been exposed to those who had contracted the virus, had taken treatment.

“I do not advertise and there is no board where I make my medicines. I have declined many media interviews. Somehow word spreads. We courier the medicines well sealed within Aluminium foil. This has to be refrigerated.

We are daily couriering – many dozens of packs – and several government officials and the private sector as well as military officials have taken this treatment.

We collect the different reactions of those who take the treatment, mostly as a protective mechanism.

We have not had a single reaction of the medicines failing. Many persons are reporting that their cholesterol, diabetes and other ailments have disappeared,” Embuldeniya said.

The latest most encouraging Covid-19 related reaction pertaining to his treatment concerns a government official from Nuwara Eliya, whose colleague had last week tested positive for the virus.

The official, prior to knowing his friend had become afflicted by the virus, had accidentally worn his colleague’s face mask for a long while before realising the error.

“The official who had consumed my Covid-19 preventive medicine about two months back telephoned me on Thursday, informing that although he should definitely have got the virus as he had worn his Covid-19 positive colleague’s face mask, a PCR testing on himself last week had been negative.”

“This is most encouraging for me as it proves that my medicines have worked. I have requested those taking the medicine to report back such reactions so that I could file these declarations by them,” he said.

“According to Sinhala Wedakama, there is information of diverse ‘families’ or ‘categories’ of viruses and whatever the new viruses emerging in the world are within those categories.”

During the first phase of Covid-19 in Sri Lanka last March, I began changing the composition of my Dengue medicine to be used for Covid-19 prevention and cure and researched which ingredients – all of which are non-toxic herbal components – could be increased and which new ones to be added to treat the virus.

I refrained from using Bee honey as a base because the number of Bees is decreasing. It is difficult to find pure Bee honey in large quantities.

Bee honey can in some instances become toxic as per different preparation methods and affect diverse people differently,” Embuldeniya said.

He said that the Covid-19 treatment he finalised by March, should be administered on the tongue for signalling the brain.

“This treatment is aimed at allowing the brain to respond to the RNA of the Covid-19 virus and destroy it,” he said.

His appeal is for Sri Lankan authorities to look at Sri Lanka’s traditional medicine with honour and respect, especially during the time of global health challenge.

“The way science was understood in ancient times in the country through which we developed many world marvels and the way it is understood now has to be contemplated upon.

As someone qualified in systems engineering, I am well aware that what I am doing using our age old traditional medical science is another method of programming; re-programming the human body,” Embuldeniya said.

He does not see a difference on the basis of knowledge in modern computer technology – systems engineering and the ancient knowledge of Sinhala Wedakama which draws on a vast body of universal knowledge that is not visible to the human eye.

He holds the view that Sinhala Wedakama can stand alone as a distinct body of medical expertise within the Sinhala tradition that could be separated on many aspects from Ayurveda.