The BANDARANAIKES and the BEVENS of HORAGOLLA: By The Rambler 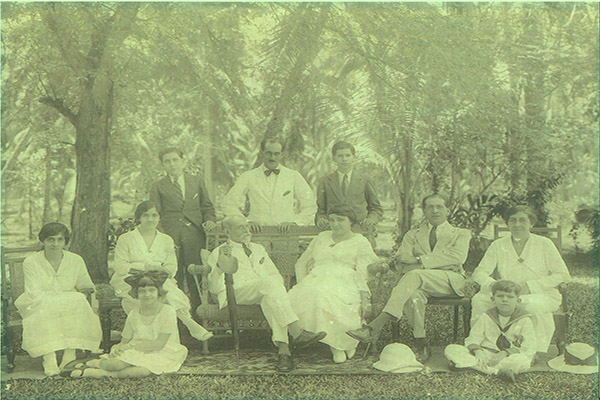 Local folk lore seem to suggest that the village of Horagolla came to be so named for the forest land dominated by Hora trees(Dipterocarpus Zeylanicus ) which grew in the area prior to it being cleared for the cultivation of coconut. It is believed that the original Horagolla Walauwwa was built nearly 200 years ago, around 1820, by SWRD’s great grandfather Don Solomon Dias Bandaranaike (born in 1780)who was granted a 175 acre land by the British Government for his assistance in the construction of the Kandy Road, particularly the section between Colombo and Veyangoda. Sir James Emerson Tennent who was Colonial Treasurer of the time published his monumental two volume treatise “CEYLON” in 1859. In referring to the then existent Horagolla Walauwwa he said” the most agreeable example of the dwelling of a low country headman, with its broad verandahs,spacious rooms, and extensive offices, shaded by palm groves and fruit trees”. According to Don Solomon;s grandson Sir Solomon Dias Bandaranaike, the building was located on the site where his grandfather found an albino tortoise (kiri ibba)which he thought was a good omen and a suitable site to build his home. Don Solomon and his son and grandson later, expanded their land holdings to cover over 3000 acres of land some of which were maintained as hunting grounds as the area abounded in elephant, elk, and deer.The property portfolio included the Weke Group of about 900 acres of coconut, paddy, and forest land including a hunting lodge. The wheel turned its full circle over 150 years later when the wife of Don Solomon’s great grandson SWRD Bandaranaike Mrs Sirimavo Bandaranaike Prime Minister of the time in 1974, engaged in a national programme of land reform and reduced the Bandaranaike land holdings to 150 acres.

The progenitor of the Beven fanily in Ceylon was Drum Major Thomas Beven who arrived in Ceylon from England in the late 18th Century and was part of the 19 th Regiment in Ceylon a unit which was involved in several campaigns to oust the then reigning King of Kandy Sri Wickreme Rajasinghe who was finally captured with the help of Adigar Ehelapola. Interestingly, when the British together with Kandyan Chieftain Ekneligoda Dissawe took Rajasinghe as prisoner, among the low country chieftains present was Don William Adrian Dias Bandaranaike, a close kinsman of Don Solomon. Although there is no evidence on record of the role played by Thomas Beven in the regime change that unfolded at the time, the family that he founded has certainly played a significant role in the country in the 19th and 20 th centuries. His only son John married Sophia Maria Koertz whose forbears lived in Ceylon from the 17 th century. He fathered a brood of 17 children of whom the fourth in order of birth was John Francis. Popularly known as Francis Beven he was born in 1847 and educated at the Colombo Academy (later renamed as Royal College).where he won the coveted Turnour Prize. He was enrolled as an Advocate at the age of 23 and at the time was one of only 21 advocates practising in the island. * His mother being of European descent Francis Beven was a member of the then dominant Burgher community. Beven commanded a lucrative law practice from his early days. He was also associated with the Exaniner newspaper, a bi weekly founded in 1846.It was purchased in 1859 by Charles Ambrose Lorenz reputedly the most highly regarded and famous member of the Burgher community of all time. At the age of 23, Francis Beven became a co proprietor of the Examiner together with Lorenz and Leopold Ludovici. He was also its Editor for many years developing the paper to be a very influential and powerful voice for the Burgher community at a time when the country was under total British rule. Later the paper took a “pro Ceylonese” stance and was the voice for the entire community. The Examiner together with The Observer and Times were the only English newspapers of that era. As a busy lawyer and Editor of an influential newspaper he was both well known and powerful. He was acting member of the First legislative Council and in the words of JR Weinman writing in 1918 “Francis Beven who hurls his thunderbolts from the Olympian heights of Veyangoda in the form of letters to the various Colombo journals, acted for some time for the late Mr Loos(in the Legislative Council). “F.B” as all Ceylon knows him is a man of great capacity. He is one of the most distinguished old boys of Royal College . Everybody who came in contact with him had the highest opinion of him.”

At the age of 34 Francis Beven had already made a fortune at the Bar especially at the Courts in Kandy where he commanded an extensive practice. A hearing impairment however impeded his further progress at the bar and in 1881, when 34 years old, he chose to try his hand at agriculture. He had earned enough at the bar to purchase a 250 acre coconut and cinnamon property near the Bandaranaike homestead. It is believed that the property was purchased from Mudaliyar DCDH Dias Bandaranaike the father of Sir Solomon and the only son of Don Solomon.. Francis named his property “Franklands” and built a comfortable house to which he moved soon thereafter. The Bandaranaikes and the Bevens became firm family friends and neighbours. Sir Solomon in his memoirs “Remembered Yesterdays” recalls his visit to Europe in 1914 where he met Mr and Mrs Francis Beven also holidaying in London. The family connection may have been so close that Francis Beven’s youngest brother H.O.Beven negotiated with Sir Solomon to lease the latter’s Weke Estate. That transaction soured later and Sir Solomon wrote” I was also compelled to go to law at this period(1915) as a result of some differences with HO Beven, who was the lessee of my Weke Estate. I was very sorry , as we had been friends for a long time. The late Mr W. Wordsworth tried the case(which was decided in my favour, with Beven cast in stiff damages), and I was represented by Mr EJ Samarawickrema(now KC) instructed by Messrs FJ and G de Saram while Mr EW Jayawardene(also now KC) instructed by Messrs Mack appeared on the other side. The case went up in appeal, and the damages were a little reduced.”

Francis Beven seemed to have lived in style emulating the life style of his illustrious neighbour Sir Solomon who was the confidante of successive Governors of Ceylon and known for his lavish entertainment of visiting royalty. . With a palatial residence served by a string of domestic staff, Francis was also in the lap of luxury. He had married at the age of 23 and had seven children. The eldest son Francis Lorenz was educated at Royal College (as were his other sons).who on his return from England in 1895 was admitted to Holy Orders and served as Curate of St Paul’s Church, Kandy and later appointed Archdeacon of Colombo. Another son Osmund was a Medical doctor . The third son Alan Karl took to planting and was in charge of Franklands although Francis was still its owner and chief occupant. A smaller bungalow was built on the property where Alan resided with his family. Family lore suggests that despite father and son living in separate houses on the same property, relationships were formal as was customary in Victorian times. When Francis had Alan and family over for a meal for instance, the invitation was on a hand written card served on a silver platter delivered by a liveried butler!!

A brief reference to another sibling of Francis Beven may not be out of place here.The eldest sibling was John George James born in 1843 and died before he was a year old. The next was Thomas Edwin who was later a well known Proctor in Kandy and a Lieut Colonel in the Ceylon Light Infantry. .He fathered 10 children among whom were the two daughters Harriet and Florence who occupied the family home “Rose Cottage” on Victoria Drive, Kandy after Edwin died in 1919. In October 1947 the two sisters, then in their late seventies met with tragedy. They employed four servants including a gardener and on that fateful night two intruders broke into their home with the aim of robbing the house. The sisters were strangled and Florence succumbed to her injuries while the elder Harriet recovered miraculously. She however died the following year. Two servants including one named KG Siyadoris who was a trusted servant for over 12 years were charged with their murder but were acquitted after a trial at the Kandy Assizes presided over by Justice C. Nagalingam.

Francis passed away in 1921 at the age of 74 and elder son Lorenz moved into the property which upon Lorenz’s death in 1947 passed on to Alan. Alan’s daughter Molly married Douglas Hennessy Superintendent of Police better known as the author of the popular memoir “Green Aisles” which wistfully recounted their life in a home built in the middle of the jungle in Horawapotana. The Hennessys later moved to Quetta in Baluchistan after bidding a tearful farewell to their jungle home and pets including a pet bear, and finally retired in Australia.

With the death of Anura Bandaranaike the last surviving direct male descendant of Don Solomon, Horagolla Walauwwa would presumably be now owned by lateral descendants. As for Franklands, Alan willed the property to the Anglican Church and there ended the Bevens’ century old connection with Horagolla. For some years the legal firm of Julius and Creasy managed the property on behalf of the church.

The Bandaranaikes and the Bevens have in their own way played dominant roles in the development of Sri Lanka during colonial days and their generational triumphs and vicissitudes seem to mirror to some degree the hey day of British colonial rule and its ultimate demise.Three generations of Bevens could be identified in the accompanying photo viz Francis, his son Alan Karl and grandson Francis Vandersmagt. The descendants of the Bevens have since chosen to seek greener pastures overseas for their future generations. Francis Vadersmagt Beven’s son Francis Hildon who migrated to Australia in the 1960s now lives in retirement after a successful career in Melbourne. Hildon like his forbears attended school at Royal College and in his youthful days in Colombo was a skilled spearfisherman and skin diver and prominent member of the old Kinross Swimming and Life Saving Club. The Bandaranaike family however for their part continued to play a dominant role in post independent Sri Lanka, their well known contribution being indelibly marked in the recent history of the country.