“THE NIGHTINGALE SINGS” by Des Kelly What a beautiful title, especially for this songbird of Ceylon, Rukmani Devi, born Daisy Rasammah Daniels, a proud combination of Tamil(Rasammah), Daniels(Burgher), & the Colombo-Chetty Christian tradition, on the 15th of January, 1923, in the Central Province Village of Ramboda, Nuwara Eliya. 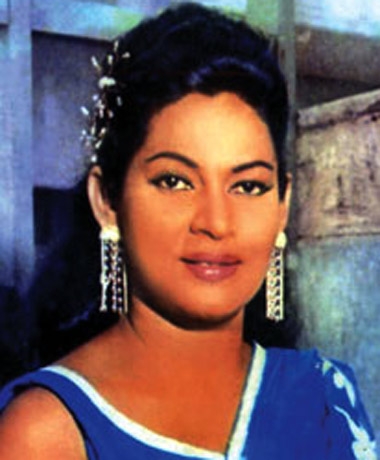 She was the second child in a family of six, loved music and singing from a very early age, spending most of her time standing by the family gramaphone and singing along with the songs that emanated from it. The very first song that she sang, in the presence of (Master) Rupasinghe, her music teacher, I suppose, was titled “Siri Buddha-gaya Vihare”, a classical Sinhala-song, when she was just 13 years old. He, the master, had a keen eye for talent, and before her professional singing career was launched, it was decided that she took the name RUKMANI DEVI(meaning Rukmani, Goddess of song), this career “took off”, and, as she became an adult, she began to look more beautiful, with each passing year, paving the way to a “Movie” career as well.

It was by no means easy, but when you are blessed with both beauty & talent, as Rukmani was, the result was that she became the first “Star” to grace the silver-screen of Ceylon. She was also the first “Sinhala movie queen to be featured in a showbiz magazine called “Film-fare”

She then married Eddie Jayamanne, whose elder brother, B.A.W.Jayamanne was a film director who used his sister-in-law as the “main-lead” in many of his films. In addition to all this, Rukmani Devi was cast as “Mayavathi” in a stage drama produced by Charles Dias. What interested me here, was that Mayavathi was in fact, Juliet, from Shakespeare’s

“Romeo & Juliet”, only, this time, a beautiful Ceylonese one. Rukmani Devi went on to doing everything she wanted to do, singing, recording, acting and becoming world-famous.

She achieved many things, in what was eventually a tragically short life. She died in a motor accident, on the 28th of October 1978, at 55 years of age. To me, Rukmani was easily one of the loveliest women of that era, in Ceylon, and in addition to her film & stage roles, her public appearances, where everyone who saw her, loved her, for who she was, to me, “the nightingale sings” and this one, will never be forgotten. This is my tribute to her on behalf of eLanka.