“TO OBSERVE THEIR 92ND ANNIVERSARY” – By Des Kelly

Say no more. 1928 saw the beginning of one of the most-read Newspapers in Ceylon (now Sri Lanka). Now, on

eLanka, we proudly present this Show-piece that was  “on-show” at many thousands of homes in Colombo, each and every Sunday morning. Thank you, folks, & please enjoy. 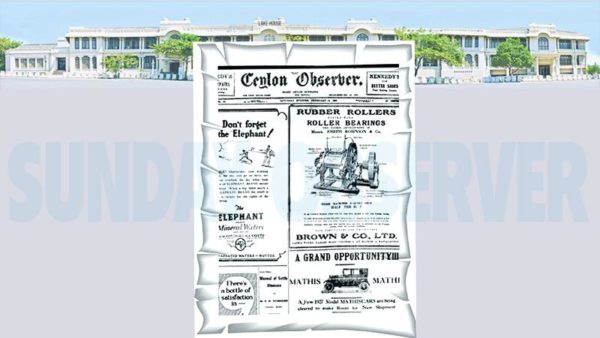 It is with pride that the Sunday Observer celebrates its 92nd anniversary in two days. The Sunday Observer has remained the undisputed market leader over the years due to the faith placed by its widespread readership who have been with us since the first issue saw the light of day on February 4, 1928.

Ninety two years as the leading English newspaper is no easy task, especially among the English-speaking population. Yet, the Sunday Observer has come a long way facing many challenges from the post-independence era to the modern day web news on smart phones and mini notebooks. Although the newspaper industry the world over is challenged by the electronic media, the Sunday Observer has continued to remain Sri Lanka’s English newspaper with the largest circulation, apart from millions of visitors who visit our website from every corner of the globe.

It has produced many illustrious editors who had maintained the rich traditions of their predecessors.

Producing a quality and readable newspaper accepted by millions of people around the world is certainly a gigantic task. But the editors, sectional heads and journalists of the Sunday Observer have worked hard during various eras to maintain the identity as well as the quality of the newspaper.

The day the late D.R. Wijewardene, the founder of Lake House, chose to release the first issue of the Sunday Observer – February 4 – ultimately turned out to be a day that changed the destiny of a nation.

During its more than nine decade proven track record as Sri Lanka’s flagship English newspaper, the Sunday Observer has been equally popular among people in all walks of life. It has maintained its position as the family newspaper which has been close to the people of different segments in society.

The Sunday Observer has maintained its own identity as a responsible newspaper which reads the pulse of the masses. Though many English newspapers emerged subsequently and adopted various strategies to win the confidence of readers, they could never pose a challenge to the popularity of the Sunday Observer.

The key to the Paper’s success is its ability to understand the needs of each and every family member. From its humble beginnings 92 years ago, the Sunday Observer is now enriched with different segments to meet the different reading needs, from kindergarten children to senior citizens.

What is more important is the fact that it has gone well beyond a customary newspaper and established its position as a truly corporate citizen, partnering in many corporate social responsibility projects.

The Observer School Cricketer of the Year has turned out to be an established brand, not only among the sports-loving public, but among all Sri Lankans.

This contest was inaugurated by the Sunday Observer in 1978/79 at a time when there wasn’t a single school cricket awards ceremony to recognise the raw talents of schoolboy cricketers.

Thanks to the premiere role played by the Sunday Observer in the country’s sports promotions, the Observer School Cricketer of the Year has produced many world-class cricketers during the past 40 years.

Sri Lanka’s World Cup winning captain Arjuna Ranatunga, the Most Valuable Player in Sri Lanka’s 1996 World Cup triumph Sanath Jayasuriya, spin wizard Muttiah Muralitharan and the Chief ICC Match Referee are among the galaxy of world cricket stars who first entered the big league after their graduation at the Observer School Cricketer of the Year contests.

The Sunday Observer has been associated with many charity projects, beauty contests, business and academic awards. It has provided an ideal platform for the country’s budding inventors, entrepreneurs, fashion designers, artistes and even amateur politicians to make their mark.

There are also important players in the wider spectrum of the Sunday Observer’s success, such as the departments of Advertising, Circulation, Commercial Printing, Web Marketing and others.

A great newspaper is hard to define. But readers could identify it at first glance – when they see one.

If being great means having the nation taking note of our articles, having arguments over them, having them reprinted, having them emailed, if being great means holding a paper packed with national, world, provincial and city news as well as sports, features, business, arts, entertainment, together with a separate magazines for children (the Junior Observer) and the young adults (Youth Observer Magazine), then the Sunday Observer is surely among the top of the list.

One of the significant aspects of the English press in Sri Lanka was that it was read by the academia, artistes, political elite, the members of the Judiciary, business tycoons and the English educated civil servants and teachers.

The other important specialised areas that attract readers across the social strata are Sports and Finance in addition to Political commentaries.

Although many rival publications emerged into the newspaper arena over the years, the Sunday Observer retains its position as the most widely read English weekly in Sri Lanka and will proudly march towards its centenary celebrations in eight years.