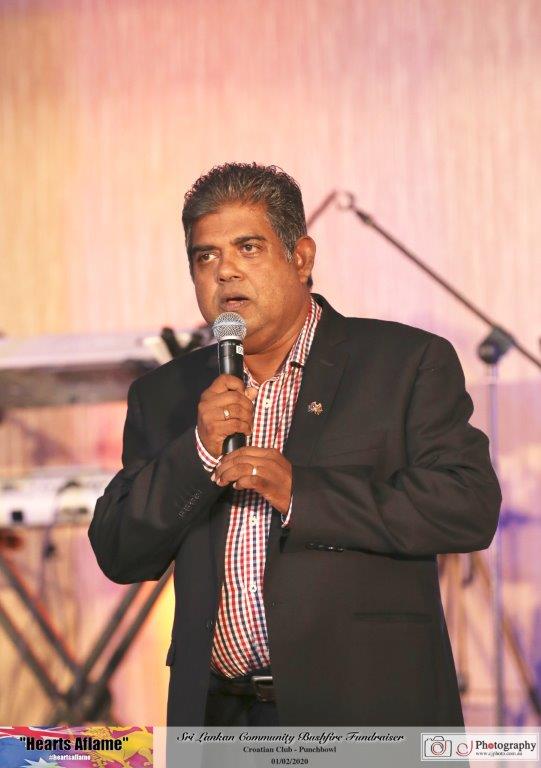 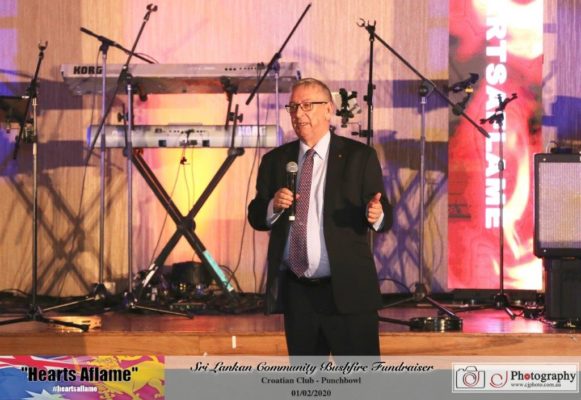 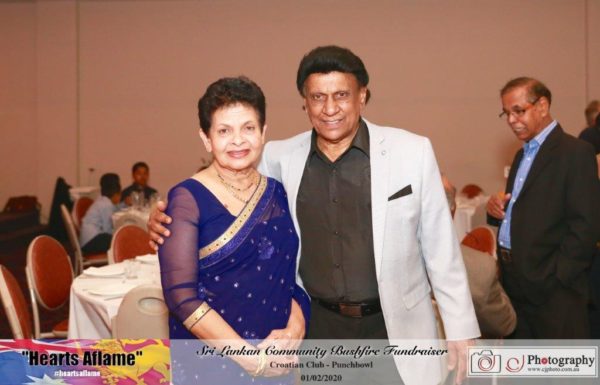 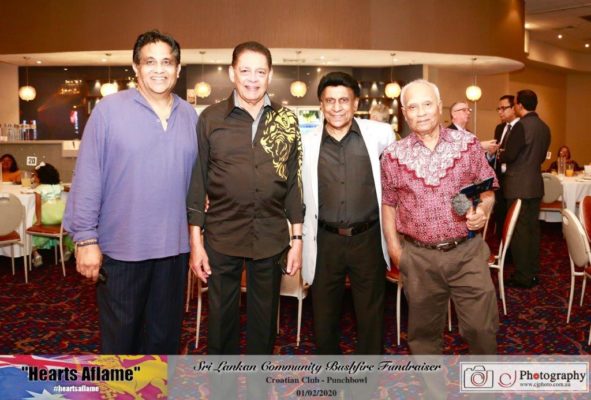 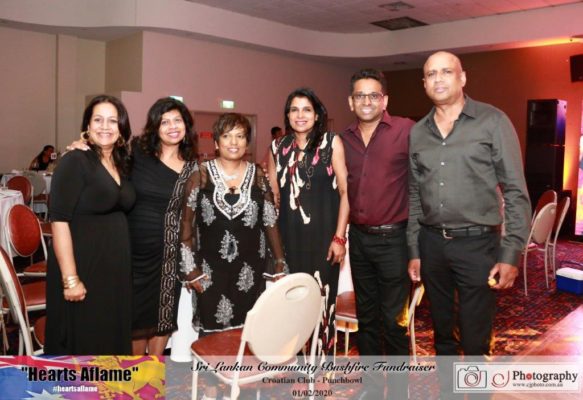 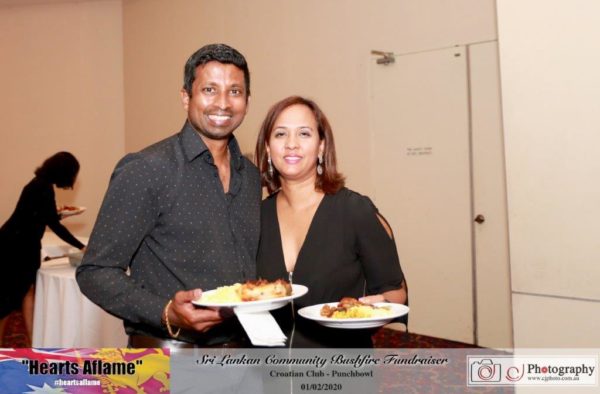 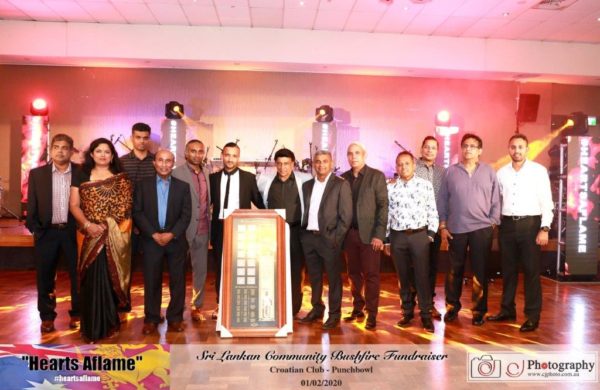 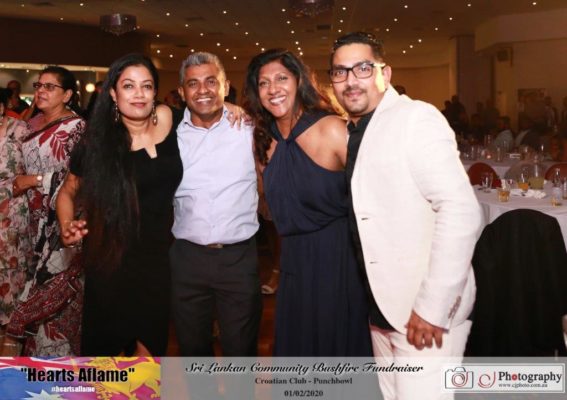 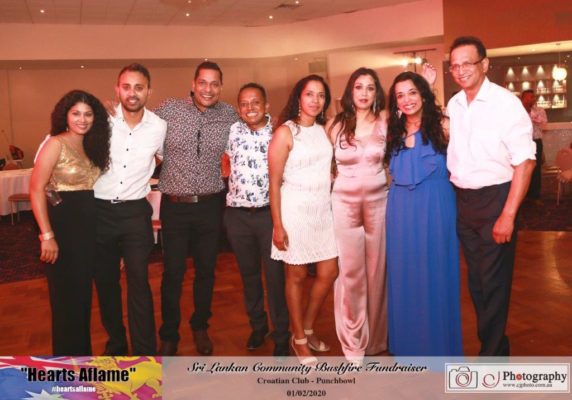 The bushfire emergency in NSW and other States and Territories in Australia is an unprecedented national disaster. Sri Lankan communities living in Sydney including Sinhalese, Tamil, Muslim, Malay, Bhurger and other community groups including Professionals, Business owners, University Alumni, School Past Pupils Associations and Community Groups have graciously united to raise much needed funds for NSW Rural Fire Service (RFS).

A formal Dinner Gathering “HEARTS AFLAME” was successfully presented at The Croatian Club Function Hall, Punchbowl on Saturday the 1 February 2020. The organising committee led by Saliya Tennakoon was comprised of 18 members representing Sri Lankan community groups in association with the staff of Sri Lanka Consulate General Office in Sydney.

The event was graced by the Chief Guest Shadow Cabinet secretary, Member of the Legislative council Hon. Peter Primrose accompanied by Mrs Jan Primrose, representing the Leader of the opposition Jodie McKay. Other VIP’s included Sri Lankan Consul General in Sydney Mr Nimal Bandara, Consul Commercial Mr Abdul Raheem and Consul Mrs. Pushpa Guruge and the Leaders of the community groups. Mr Russel Arnold was present at the event as a guest of honour.

The event commenced with a spectacular traditional dance performance by Maathra dance studio in Sydney.

Master of the ceremonies Mr. Duke Ramachandrawelcome all the guests and mentioned the community gathered around with passion and Love to support this nation most of us call our home. Duke made a heartfelt tribute to all the victims of Bushfire and their families and mentioned it was hard to comprehend the scale of this crisis. Duke pointed out Hearts Aflame has laid a foundation to support the Fire Fighters.

Special messages sent by Leader of the opposition Jodi McKay and Commissioner Shane Fitzsimmons of Rural Fire services were read out by the Secretary Madhu Arampatta.

Mr Jagath Bandara from Sydney Api made the welcome speech and pointed out we have an unconditional duty to support Australia where we have gained so much and chose to be our second home.

Chief guest Hon. Peter Primrose addressed the crowd and commended their support towards Bushfire Emergency.  Mr Primrose mentioned Sri Lankan community should be proud what they have done so far and what will be done in the future too. He specifically commended the small businesses who has supported the cause and his involvement in rebuilding the affected areas with his political associates.

The Sinhalese Cultural Forum of NSW supported the cause by donating all proceeds of their recent Lunch packet project. President, Upul Padukka Vidana handed in a cheque for $10,300 drawn in favour of The Rural Fire Service, to Sri Lanka consul general Mr Nimal Bandara. A collection of $3000 by initiated by Nishantha Jayakody has already being handed over to RFS.

One of the highlights of the night was  interviewing volunteer fire Fighter Kanchana Fernando  by the MC. Kanchana mentioned the reason he joined in as a volunteer fire fighter to the RFS was he simply felt he has to give something back to the community he was living in. He also mentioned they fight the Bushfires as an united front, and that is exactly what he sees in Hearts Aflame community gathering.

The guests have enjoyed the relaxed environment with the understanding they are part of one of the most gracious events in Sydney on the night.

Highlight of the night has been Auctioning of Cricket Bat Autographed by Legendary Sir Don Bradman donated by our Platinum sponsor Mr Harry Solomons of Kingsgrove Sports.MC for the night Duke Ramachandran proved his amazing auctioneering skills by starting the Auction at $2000, and passionately driving  throughout the process, engaging the enthusiastic crowd who could not resist the excitement and showed their generosity by splashing in bids from all around the hall. Dr Harrold’s determination was clear right from the start that he would be taking this masterpiece home to his collection of exclusive memorabilia and won the bid at $6500.

A silent Auction took place at the venue for the kings of the court Autograph photo memorabilia donated by Mr.Siva Kumaran of Blue Elephant which scored $1000 for this great cause.

The entertainment commenced with a joyous live musical rendition by the Band Mystery. The crowd danced away to the music while guest performer Mr Desmond de Silva entertained the crowd with vibrant Baila rendition engaging the enthusiastic crowd. Sound, Vision and Lighting services provided by  and Event 360 has glorified the venue with  vibrance in colour llighting  and surroundings.DJ Shankaster covered the entertainment session during short breaks by the band Mystery.

We extend our gratitude to our sponsors,

The event has been an overwhelming success raising close upon $15,200.00 for the RFS. The Partnering organisation The Sinhalese Cultural Forum of NSW who has donated all their proceeds of Lunch packet project $10,300 and a further collection by Nishantha Jayakody $3000 boosted up the total to $28,500.00 for the night. All the proceeds will be donated to the RFS shortly at a special ceremony at the Commissioner’s office. We thank all our guests for all their generous support for the success of the event.