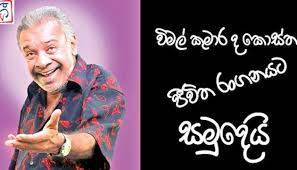 The unsung hero of the silver screen and stage, renowned actor Wimal Kumara de Costa breathed his last owing to intense respiratory difficulties on the 20th November 2016 after he was admitted to the Kalubowila Teaching hospital on the 19th with a severe chest pain when he was preparing himself for a programme in a FM radio station

He was 68 years old at the time of his demise was an actor most distinguished for his character and comedy roles portrayed under the direction of legendary directors like Dharmasena Pathiraja, Sunil Ariyaratne and Gamini Fonseka.He is cited as the  pioneer in Sri Lanka mime industry.

Wimal was very famous for “his action or art of imitating someone” in which he excelled initially which he successfully portrayed to entertain or ridicule. He virtually introduced this skill to Sri Lankan theatre.

. Here was an actor who was equally at home in both serious and comedy roles. He could match the best of ‘serious actors’ as well as

the comedy actors and those days, they were top notch performers like D.R. Nanayakkara, Don Sirisena, Freddie Silva and Anthony C Perera. Harmonizing or even exceeding the acting prowess of these heavyweights on both sides of the silver screen was no easy mission. And it was a mission that Wimal relished making it an eternal impression.

Naturally, he was a great fitting to the stage. In fact, that is where he began his long acting journey. Like the former Vijaya Nandasiri who passed away before him. Wimal too continued to act in stage dramas almost till the day he passed away at the age of 68.

His most recent stage performance was in the hit drama “Kawruwath Yanne Ne” in which he portrayed the role of a politician with consummate effortlessness. This drama also distinct a new spiralling point for Wimal – he sang in this drama for the very first time in his assorted career. Hithahonda Ammandi, Nettukkari, Kora Saha Andaya, Malakolan and Dunna Dunugamuwe for which he won the Best Actor award in year 1963 are  only few among the stage plays that he starred in. 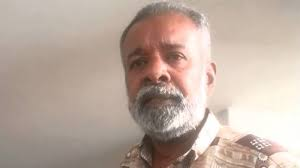 Born on July 4, 1968 and an old boy of Gurukula Vidyalaya, Kelaniya,,his contemporaries were Malini Fonseka ,HD Premaratne Dharmasena Pathiraja etc .His acting career began to take appearance while he was still at school. He portrayed a role in the drama Godot Enakan , a Sinhala adaptation of Samuel Beckett’s famous play. His first movie was a short film Sathuro by Dharmasena Pathiraja who was the director of his first feature movie Wes Gaththo.

The duo would go on to make several great movies together including the critically acclaimed Bambaru Ewith. Renowned actor Vijaya Kumaratunga,Wimal Kumara de Costa duo were Pathiraja’s favourite actors. Incidentally, both of them began their film careers initially in the year 1969.

In all Wimal had acted in over 100 movies. These movies were screened from late 1960’s to year 2015.His last movie was Lantin Singho screened in the year 2015. Many of his movie characters were significantly acclaimed as being pragmatic portrayals of characters that existed in true life. Top directors were eager to cast him in their movies and some roles were scripted predominantly with him in mind. On stage and film, Wimal excelled in every role that he was asked to perform. Wimal’s demise is an irreparable loss to our country. It needs to be said that the loss of such an actor was not given any publicity with only a very handful attending his last rites ,