A monument constructed at the ninth kilometer post on the *Ella – Wellawaya Road near the village of Randeniwela is a unique obelisk to commemorate the Battle of Randeniwela (Battle of Randeniya or Sinhalese – Portuguese War), a battle fought on August 25th 1630. The battle was fought between Portuguese forces commanded by the *Governor Constantinu De Saa de Noronha and King Senarath’s (1604 – 1635) youngest son Prince Maha Astana (pre coronation) who was later crowned as King Rajasinha II (1635 – 1687), the second ruler of Kandyan Kingdom and his brother Prince Vijayapala.  The battle was fought near *Wellawaya, situated in close proximity to *Badulla. The battle had taken place when Constantino de Sá launched an invasion via Badulla. The Portuguese army, despite their superior cannon power suffered a massive defeat subsequent to a mass defection by its Lascarin (local militia) contingent. The Portuguese power had been frail during the battle due to the retreat of their troops. During the Battle, the Captain was also killed.

The Battle of Randeniwela is also recorded in Portuguese sources such as Queyroz’s ‘Conquest’, Ribeiro’s ‘Historic Tragedy’, Menezes’s ‘Rebelion’ as well as an anonymous account known as the ‘Jornada’, considered as a more authentic account of the Battle, written in 1635, approximately five years after the events (of the Battle). In the account of Jornada) there are descriptions about *Muthiyangana Raja Maha Viharya (Temple) too. 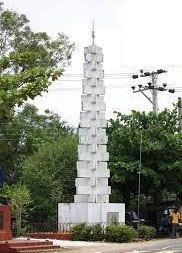 According to Jornada’s account of the events leading to the Battle “a stone wall and a ditch on one side and the river (considered as the Badulu Oya) on the other. The next day he spent in sacking and torching the city, particularly the Kataragama Devale (devale meaning Hindu Shrine) and ravaging the countryside, destroying ‘more than 2000 measures of rice in the stalk’ and all the cattle he could find”.

Battle of Randeniwela is considered as a significant historical event that took place during the Portuguese Colonial era in Sri Lanka.

The toponyms of the area surrounding Randeniwela, almost every hamlet have names with military connotations; Hingurukaduwa (the hiding place or store for swords), Hewankandure (a stockade for soldiers), Ulhititenne (a place where palisades were set up), Hinapahuwa (a place where the army retreated), Udawadiya (a camp on the heights), Randeniya (plain of soldiers), Kolabure (a fracas or uproar), Polgaswela (the field where coconuts were dashed to celebrate the victory) and Ballakatuwa (derived from Balakotuwa meaning fort).