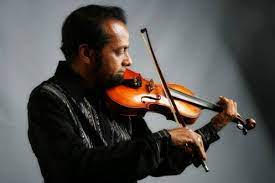 Violinist,vocalist and music composer DD Gunasena arguably the best violinist ever germinated in this country.

DD is one of the few musicians who has heavily traveled to most overseas countries,like England, NewZealand,Italy,France,Maldives,India,Pakistan,Malaysia,Norway, Denmark,Canada, Middles East countries, Sydney,Melbourne,Brisbane in Australia etc.Most of these visits had been to accompany Pandit WD Amaradeva for his concerts.. 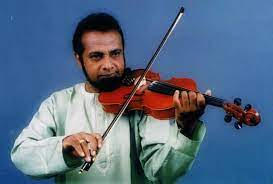 Born in 1947 to his parents in Kolonnawa had attended initially Kolonnawa Maha Vidyalaya , then Maradana Sri Sangaraja Maha Vidyalaya.Unlike most musicians DD had developed his innate music abilities at home not in school.At home they have possessed several musical instruments like Harmonium,Tabla, Dollak,Mandolin,Sithar.The then Tower Hall artistes used to visit his home to practice and play the musical instruments.His elder brothers and father DD Wilbert were rather competent in playing the instruments but DD who was young was barred from even touching them.But DD had music instincts in his blood was very interested in learning to play musical instruments ,which he did on his own when no one was at home. 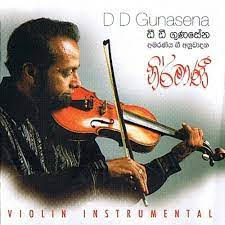 Before a music concert most of the artistes had gathered at DD’s house to rehearse.DD had gradually learned to play music ragas. Then had learned to play the violin under the music master LKJ Wickremasinghe. Initially DD had been invited for small music recitals before he became sought after in the past decades performing at all music, film, recordings and overseas concerts as the premier violinist.

The tower hall artistes inspired DD to learn to play the harmonium initially, which he had played it in the absence of skilled musicians.The artistes who had sung then were

In the year 1971 DD was absorbed into the SLBC orchestra as a ‘casual’ violinist.This gave him the opportunity to take part in ‘Sarala Gee’ auditions along with stalwarts like HR Jothipala.GSB Rani,JA Milton Perera and R Sivananthan under the music directions of music geniuses like Mohamed Sally,Shelton Premaratne.Subsequently DD had met stalwarts like MK Rocksamy,Somadasa Elvitigala,PLA Somapala,Lathief Master,Premasiri Khemadasa, RA Chandrasena.DD had also learned western music under musician Douglas Ferdinandez.

Also in year 1971 DD was invited to sing in ‘Prabuddha Gee” of music maestro and composer Premasiri Khemadasa.The song “ Sondura Matasamudenna”with lyrics by Saman Chandranath Weerasinghe recorded is still a hit after nearly five decades. Several other artistes also have sung this song have been heard over our airways constantly.DD is an accomplished singer who could sing Hindi songs well in particular, having sung many cover songs.DD has obtained a diploma certificate for music from Bhatkhande University. 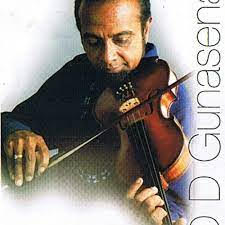 Apart from been a well-known singer DD has directed music in Tele Dramas and films mostly in the 2000 decade.For the music score in Tele Drama.” Arungal “ DD was awarded State music , OCIC and Raigam awards.Two of the films where DD did music were “Ru Re” and “Akunu Pahara”.

DD for his skill and craze for singing Hindi songs had in the year 1999 had organized a recital named “Suhani Rath” and later his solo Violin exhibits “ Nirmani” to packed houses at the Tower Hall, John de Silva and Ananda College auditorium. This was also shown in Sydney and Melbourne also to interested audiences.

DD during the past decade has been shuttling to and from Melbourne as his son Dumidu Roshan is domiciled particularly after the demise of his wife Luckshmi Samaraweera in year 2011.DD ‘s is blessed with a daughter Sadna living back home. DD is now locked down in Melbourne awaiting a flight back to Sri Lanka.DD could be contacted on 0061470222120 where he conducts violin classes.

All well wishes of music genius DD Gunasena would wish him good health and longevity in his twilight years.