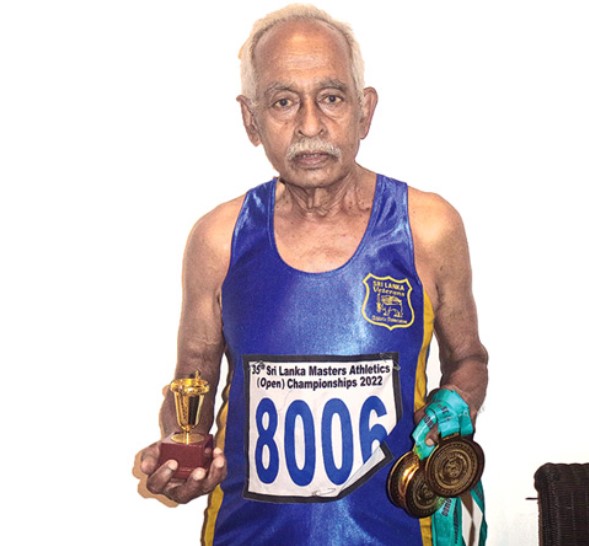 N.L.W.Narasinghe of Kandy District came out with flying colours to win 1500, 2000 Metres.

obstacle race and 5000 Metres. race at the Veterans Athletic Championship participating in the

80 – 85 age group securing three Gold Medals which is a rare achievement. This veteran Athletic Championship was held at the Sugathadasa Stadium on 19th& 20 th of February, 2022 and in addition he was placed third in the 800 Metres. race in the same age group. In this event the first two places were won by two Indian Athletes. Before this as an experienced Athlete he has

Narasinghe has been in the Athletic Field since 1985 and since then he has been among the first three in whatever event he has taken part in. He has been an Arts Degree holder of the University of Peradeniya and was a Principal in a Government School in Ratnapura. He says that as he was involved in Athletics from his younger days he is still physically fit although he is 85 years old and he has enough time and space to do fitness excercises in his home town but at present he is residing in Gannoruwa,Kandy. His advice to the present day athletes is to pay more attention to their physical training regularly so that they will improve their talent in time to come.