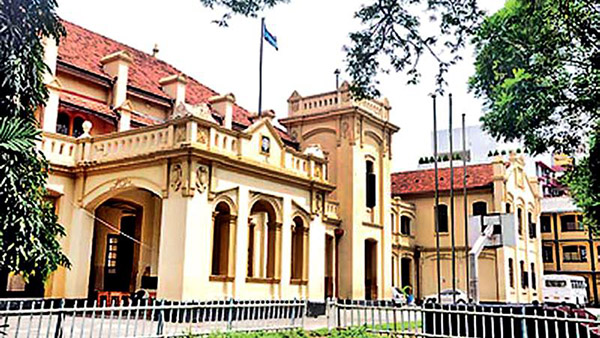 The Methodist Mission began in Ceylon in 1814, with the arrival of a team of missionaries sent by the British Conference. At the 150th anniversary in 1964, the Conference of the Methodist Church, Ceylon received its full autonomy. 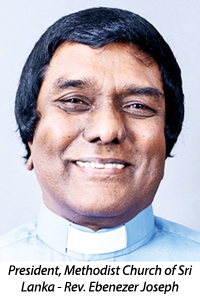 Wesley College Colombo, a leading, premier Christian boys’ school was founded on March 2, 1874 and named after John Wesley (1703–1791), the great Evangelist and Founder of the Methodist Church. Tradition has it that every year, the Double Blue Fraternity gather to celebrate the memory of the Founder of Wesley College the Rev. Daniel Henry Pereira – on Founder’s Day, March 2 which is the death anniversary of Rev. John Wesley the great Evangelist.

Psalm 127:1 says, “Unless the Lord builds the house, the builders labour in vain.” The strong conviction of the Founders of Wesley was, that in any activity they undertook for the College and its future – God’s blessings were needed, for whatever they intended to accomplish for this school.

2021 marks the 147th anniversary of this historical founding of Wesley College. Even though this institution was envisaged to be distinctly a Christian boys’ school, Wesley College opened its doors in a magnanimous gesture to provide opportunities in education for thousands of Sri Lankan boys from diverse religious and ethnic backgrounds in the past 146 years, while upholding and maintaining its distinct Christian identity.

The Vision of Wesley is – To be the Premier Christian secondary educational institute and to provide men of stature and integrity to be leaders in the technologically advancing environment. 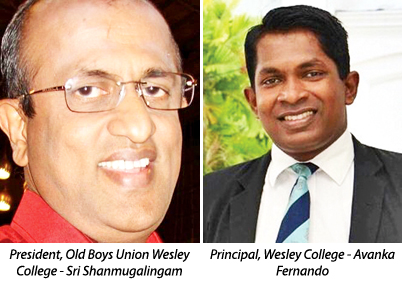 The Mission of Wesley is – To inculcate Christian values and provide opportunities to develop latent potential and skills to lead the nation.

Against this backdrop, it could be said that the Divine Providence of God has indeed bestowed an incredible Blessing upon this Institution Wesley College, as it prepares to celebrate 150 years since its founding on March 2, 1874 by Rev. Samuel Rowse Wilkin and Rev. Daniel Henry Pereira. This great Blessing is the current “Wesley Troika” comprising Three Wesleyites who carry on this noble Mission of the Founding Fathers by upholding the Christian Traditions and Spirit of John Wesley through the mandate entrusted to them. They are Rev. Ebenezer Joseph – President of the Methodist Church, Avanka Fernando – Principal Wesley College Colombo, and Sri Shanmugalingam – President Wesley College OBU Colombo.

Rev. Ebenezer Joseph is an old Boy of Wesley College, who heads the Methodist Church in Sri Lanka as its President for the second time and in which capacity, he is also the Manager of Wesley. He also previously served as the head of the Methodist church in Sri Lanka from 2005 to 2010. He was a hosteller at College and was a student during the tenure of Shelton Wirasinghe.

He was the General Secretary of the National Christian Council of Sri Lanka for 14 years, promoting Ecumenical relations among various Christian Denominations and promoting Inter- and Intra-Faith Dialogue. Rev. Ebenezer was conferred the title of “Samayanthara Darshana Sevitha Shasana Sobitha” in recognition of his contribution for National Unity and Religious Co-existence in Sri Lanka in 2006. He has specialised in Theology and Social Analysis and lectures in Theological Institutions

The Principal of Wesley College Avanka Fernando is an old Boy and the youngest Principal to be appointed. He hails from a Methodist background nurtured by his father Rev. Noel Fernando who was also a former President of the Methodist Church of Sri Lanka. Fernando had his entire Education at Wesley College where he excelled in Academics and also represented the College Internationally in Badminton and Chess at the Asian Junior Chess Championship in 2003.

Having completed his Bachelor’s Degree in Sciences from the Open University of Sri Lanka, he proceeded to complete his Master’s Degree from the University of Portsmouth in the UK specialising in Education, Leadership and Management. Fernando joined the Staff of Wesley as a Teacher in 2009. He rose to becoming the Sectional Head of Grade 10 and 11 and promoted as the Headmaster.

Sri Shanmugalingam, the President of the Old Boys’ Union is a strong Methodist. He is a Director at York Arcade Holdings PLC and is a Professional Financer and is into Portfolio Management of a group of companies.

He is also in the field of Investment Finance Administration and Real Estate. The Committee of the Wesley College OBU Colombo, under the leadership of the Incumbent President Sri Shanmugalingam, strives to uphold the traditions and values of the great Christian Methodist Legacy – which they inherited from preceding generations and ensure that it is passed down to the future generations of Wesleyites. Due to the Covid-19 pandemic, many projects and activities of the OBU were curtailed.

However, the OBU under the Leadership of Sri Shanmugalingam is working in unison and close collaboration with the Principal Avanka Fernando and the President of the Methodist Church, Rev. Ebenezer Joseph, towards the projects planned for the 150 years Celebrations for the betterment of Academics and Sports at Wesley.

The Old Boys’ Union having a history of over 130 years, has been involved in many projects be it in Academics, Sports, Extracurricular Activities. They have always upheld the traditions of the College, founded on great Methodist principles of simplicity and honesty by producing men of integrity for the country. Wesley College is an institute which brought together boys from many ethnic and religious backgrounds under the Double Blue Flag and produced many distinguished old boys during the ages in all spheres to serve the nation, “as men of grit and industry.”

Among these have been national heroes, legislators, educationists, doctors, sportsmen, bankers, mercantile sector professionals, musicians, dancers and artists, the brave men of the Security Forces, all of whom brought honour and glory to Wesley and the Nation, and still remained unassuming – simplicity being the hallmark of the Wesleyan Methodist Spirit!

Among some of the most outstanding and distinguished alumni who have passed through the hallowed portals of Wesley College and have contributed to society and the world are: Sir Oliver Ernest Goonetilleke – the 1st Ceylonese Governor-General (1954–1962), Sir Don Baron Jayatilaka – President of the Colombo Y.M.B.A, Freedom fighter and Leader of the State Council, Sir Claude Corea – President of the UN Security Council, Chairman of the UN Interim Committee on International Commodity Arrangements of GATT, Representative to the United Nations, President of the Ceylon National Congress, Ceylonese Representative in the United Kingdom, First Ceylonese Ambassador to the United States, D. M. Rajapaksa – Known as the Lion of Ruhuna and a member of The State Council of Ceylon, Walisinghe Harischandra – Social Reformer, Historian and Author, Sir Mohamed Macan Markar – Member of the Legislative Council of Ceylon, Sir Gerard Wijeyekoon – the first President of the Senate of Ceylon and Member Legislative Council of Ceylon, Mahadevan Sathasivam – International Legendary Cricketer, P. De S. Kularatne – Principal of Ananda College, E.W. Adikaram – Social Activist and a Philosopher, Founded Multiple Schools – Anula Vidyalaya, Ananda Balika Maha Vidyalaya Kotte and Ananda Sastralaya Kotte, E. F. C. Ludowyk – Shakespearean Scholar, Author, Playwright and Critic, The First Professor of English University of Ceylon and the First Dean of Arts in the University in Peradeniya, M. H. Mohamed – Speaker of Sri Lanka Parliament and Mayor of Colombo and Deshamanya Chitrasena – internationally known for his work in establishing and popularising traditional Sri Lankan dance forms worldwide.

These brilliant old boys are role models who have lived up to the ideals and values of the founders, bringing honour and glory to their Alma Mater through their professions. They will continue to inspire generations of Wesleyites in the years to come.