Yudaganawa – largest stupa in the south and east of Sri Lanka

Yudaganawa Stupa popularly known as Kinkini Stupa is located in proximity to Buttala about 46 kilometers on the scenic *Ella – Wellawaya Road.  This large stupa has a circumference of 317 meters and dates back to the second century BC. The stupa is built halfway and there is a small stupa on it.  According to *Mahawamsa (ancient chronicle of Sri Lanka), there had been a battle between *Prince Dutugemunu and his brother *Prince Saddha Tissa after the death of their father *King Kavantissa (205-161 BC who ruled the Kingdom of *Ruhuna).

According to folklore, this battle had taken place in the vicinity of Yudaganawa Temple. Prince Saddha Tissa has been in hiding in this temple in fear of his brother Prince Dutugemunu.

Yudganawa also known as Yuddhaganawa (in Sanskrit means “Yuddha” for war and “gana” for gathering or crowd or troops). Hence, Yudaganawa means coming together for combat.

There is another stupa in the vicinity known as Chulangai Viharaya dating back to the 12th century. The Buddha Statues in the Image House date back to 6th – 7th centuries.

This stupa is the largest in southern and eastern Sri Lanka, the area known as “Ruhuna” in the chronicles.

According to scholars, the construction of this stupa is a mystery as a massive construction of this nature is not mentioned in chronicles.  There are various theories about the stupa. According to some, this stupa is from *Polonnaruwa Period as its shape resembles a hemisphere cut in half horizontally, as the stupa resembles Kota Vehera which was the typical structure of stupas constructed during King Parakramabahu I’s era (also known as Parakramabahu the Great – reign 1153-86). Demala Mahaesaya in Polonnaruwa and the Kota Vehera in Dedigama (a stupa located in close proximity to Nelumdeniya in Kegalle District – one of the 25 districts of Sri Lanka) built during King Parakramabahu’s era have similar structures. According to folklore, Yudaganawa was the hometown of King Parakramabahu I’s mother Ratnavali. Hence, it was the place where the King enshrined the ashes of his mother (as recorded in Verses 79, 71-72 of Mahawamsa). 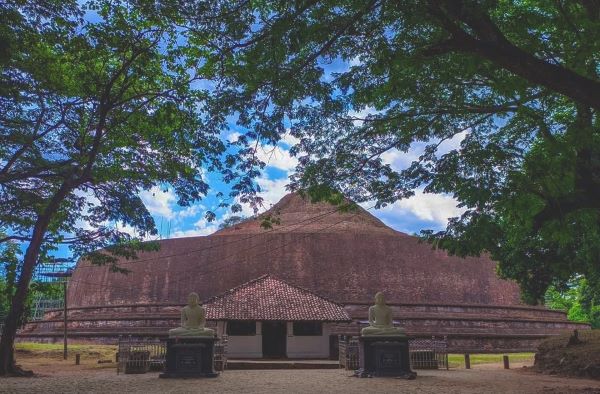 Meanwhile, some scholars are of the view that the stupa was from the Anuradhapura Period (commonly known as the Kingdom of *Anuradhapura – 377 BC – 1017 AD).