Too many “tourists” who visit our “Paradise Isle” in “My Lovely Island Home” are actually unaware that there are, indeed, 550 steps to the apex of Paradise. For these lucky people who either intend to, or even visit and then revisit Sri Lanka, do try to climb these historical “steps” (all 550 of them) when you go there next. Sadly, it’s only “wishful thinking” on my part.

At the start of the trail to Adam’s Peak

Every year, approximately 20,000 pilgrims, ranging widely in age, fitness level, and religious beliefs, climb Adam’s Peak in search for moral and spiritual significance. Adam’s Peak bares significant spiritual and religious meaning, not only to the Thevada Buddhists, that account for 70% of the Sri Lanka’s population, but also Hindus, Muslims, and Christians. It is this summit that is said by the Brahmans to be the footstep of Shiva and by the Buddhists of Buddha. Muslims and Christians in Sri Lanka, however, believe that it was Adam, the first Ancestor, that set foot on Adam’s Peak, as he was exiled from the Garden of Eden.

A Sri Lankan family was making their way down the stairs. I later learned that many pilgrims choose to ascend during the day and spend the night camping out at the top, waiting for the ceremony at sunrise.  That night was especially unpleasant, leaving many to believe that the beautiful sunrise, typically rewarded to climbers that reach the top of the peak, was not in the books.  A frail older woman was carefully placing her bare foot on each step, holding onto two slightly younger looking women with both arms. Their heads wrapped in scarfs, their bodies clad in traditional saris, their feet – dirty and bare, stepping slowly into puddles freshly formed on the steps.  I moved to one side of the steps to let the women pass me. I could tell the descend was tough on the older woman’s knees. A glimmer of light brushed over her, exposing the ache and anguish reflecting on her face. She must’ve been at it for hours.

I immediately felt a bit foolish for sounding like a complete baby just a few minutes earlier. To me this was just another hike, another challenging activity to push myself, to test my physical limits. But to this 70 year old Sri Lankan woman, the climb was a deeply spiritual journey that, despite the pain and suffering, brought her inconceivable joy and enlightenment. In a way, I was a bit jealous of the deeper meaning that night brought to her.

“Do you want to stop for a cup of tea?” – Max asked me pointing at a resting stop, lined with a few tea shops.
“Yes. Please” The man does know the one thing that will always make me feel just a little bit better.

Inside the make-shift tent, were 2 small stalls, serving hot tea and coffee. You could also pick up a few snacks or a hat and a pair of gloves. Climbers were resting their feet on a few benches along the wall. The tea tasted incredible, as did all the tea I had in Sri Lanka. It immediately warmed up my insides and was exactly what I needed to get me through the remainder of 1500 steps to the top.

As we reached the top, the crowd was already gathered along the perimeter of the buildings covering the summit. Everyone looking out into the black abyss.

The dawn broke and as if on cue, the rain stopped, and the clouds started to part, giving everything around us a deep blue hue. The yellow lights atop of the buildings were sparkling amidst the bluish hues creating a fairy tale like ambiance. I froze, slightly mesmerized by the sight…

“You are supposed to ring a bell, when you get to the top” – said a fellow traveler, pointing to the bell at the end of the platform, where a crowd was gathering.

Bell at the top of Adam’s Peak

We made our way across and just as I reached over to ring the bell, the sound of drums and traditional Sri Lankan trumpets filled the air. It was rhythmic and captivating. The sound reminded me of the tune of a snake charmer, but combined with the spirituality that surrounded us, it left a much deeper impression. It was in that moment that the pain and suffering of the last 4 hours seemed worth it.

At the top of Adam’s Peak

The sunrise wasn’t jaw-dropping, but given the pouring rain and the miserable weather over the last 4 hours, it was more beautiful then we expected.

Within a few minutes the sky was lit up and it was daylight. The clouds were hanging high above the peaks, giving us a clear view hundreds of miles away.

View from the top of Adam’s Peak

The walk down was just as painful as the trek up to the top. By the time I reached the top, my legs felt like jelly and my calves were crying with pain and yet there were another 5500 steps to go until we would reach the bottom. But on the flip side, this time it was light out and the beautiful views made the trek a lot more pleasant!

Views from the trail from Adam’s Peak

The trail to Adam’s Peak. Most people are going down, but some are still making their way up to the top. Buddhist flags line the trail. The church far in the distance indicates the bottom of the hill. It’s a long way to go! Somewhere behind the clouds is the Dalhousie village

The descent didn’t take nearly as long as walking up to the top. In only 1.5-2 hours, we were back in Dalhousie, with our friend, the Pup, running down alongside of us for the majority of the way. His loyalty definitely earned him a breakfast from the cafe at the bottom of the peak. I’m sure this wasn’t the first time he got friendly for a plate of rice and meaty bones. 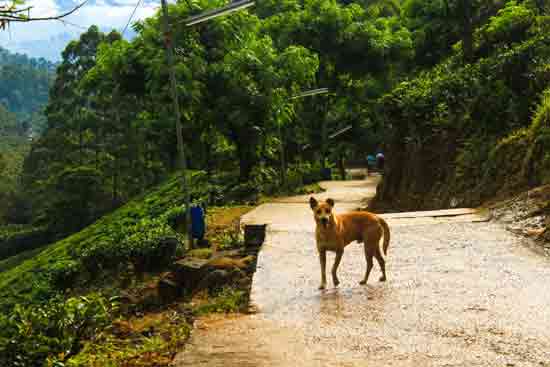 Looking back on the 7 hour return journey to Adam’s Peak, I’ll honestly say, it’s not for everyone. If you love to hike and challenge yourself physically and mentally, or if you are a spiritual person, a hike to Adam’s Peak will probable be the highlight of your trip to Sri Lanka. But if you are not, think twice before setting off on this trek and if you do, be prepared to pay for it. No matter how fit you are, how often you hike, or run, or hit the gym, your body will be in pain for a couple of days after the hike. Some will recover within a day or so, but others will suffer for as long as 5-7 days, like I did.

If there is one piece of advice I can give you about going up to Adam’s Peak it’s this: Schedule a trip to Adam’s Peak AFTER all the other hikes. Your body will thank you for it!

When to Go: The pilgrimage season at Adam’s Peak starts in December and lasts until March/April. December/January are the busiest months on the trail. Going off season is not recommended due to bad weather and lack of shops/accommodation options available

Getting There: Adam’s Peak trail starts from the village called Delhouse (sometimes also spelled as Dalhousie), located about 30 kms from Hatton in Central Province of Sri Lanka. The easiest way to get to Delhouse is by taking a train to Hatton. It’s about a 3 hour journey from Kandy or about 1.5 hrs from Nuwara Eliya, depending on which direction you are traveling in. Once in Hatton, you can choose to hire a car, a tuk-tuk, or hop on a local bus to get to Delhouse. The journey will take about an hour. If you don’t have too much luggage, I recommend getting a tuk-tuk. It’s a bumpy but really interesting ride passing through beautiful waterfalls, small villages and lush tea plantations.

Where to Stay: There are a number of accommodation options in Delhouse, ranging from really nice hotels to simple guest houses. Room rates will often include breakfast. Booking ahead is not essential, but is recommended, especially during the busy season. We recommend the Hugging Clouds for its great location and great starting point for Adam’s Peak hike.