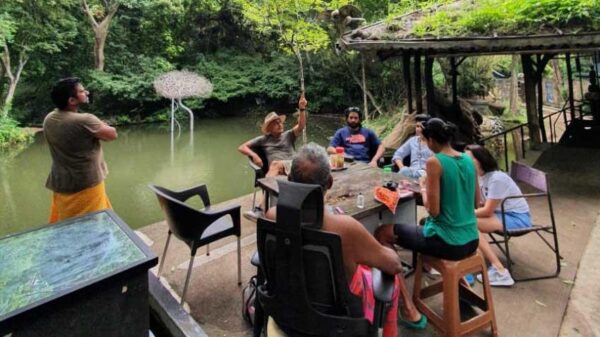 He lived in a strange place called ‘Diyabubula’ (an oasis that he has created for himself through decades, and what many believe to be his greatest creation) in Dambulla

Laki’s other great lesson in life is of course in the realm of his pursuit of happiness. Not as a destination in itself, but rather as a state of being.

Perhaps Laki’s greatest quality was his investment in the people around him. With no real ‘effort’ at all, he did what’s best possible to make the lives of others simply better

This article is about the life of the ‘Most Interesting Man’ I have ever known. Laki passed away in the morning of May 30 following a brief illness. Laki was known for great many things. He was an artist, a sculptor, gardener and had a significant impact on Sri Lankan arts and culture for the past 50 years or so.

He is associated with the greatest names of arts and culture in Sri Lanka such as Geoffrey Bawa, Ena de Silva, Barbara Sansoni and Dominic Sansoni and Anjalendran, to name a few. He not only designed currency notes for Sri Lanka, he also designed the great chandelier that hangs at the parliament.  Laki played an instrumental role in architecture by introducing ‘tropical garden’ to the architectural framework which used to be just bricks and motors. His sculptures and paintings adorned some of the most significant buildings that have been built in the island.
His life was anything but normal, and I believe in time there will be a lot to read on his many achievements. This short piece is however dedicated primarily to Laki’s incredible human qualities, which went beyond the extraordinary talent, he possessed and executed on. This is my story.

I got to know Laki a few years back after purchasing a lovely watercolor piece of his from the Barefoot Gallery. My best friend Deshal de Mel and I at the time paid what we thought was a substantial amount of money to acquire a piece by Laki Senanayake. However, at the time, neither of us really knew who he was. I took upon it myself to change that, and after digging around a bit I managed to get through to Laki on the phone and requested for a meeting, which he kindly agreed to. Then only did we discover that he lived in a strange place called ‘Diyabubula’ (an oasis that he has created for himself through decades, and what many believe to be his greatest creation) in Dambulla, which again at the time we had no idea about. I then put together a like-minded group of individuals, who knew very little about arts and even less about Diyabubula and set about to meet him. Little did we know that our little adventure would have a lasting impact on all our lives. 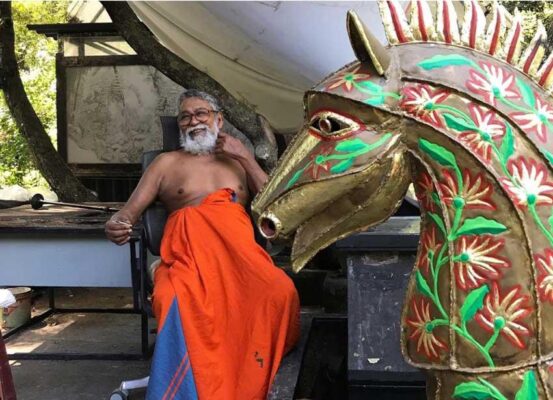 And this is what I learned from him over the years since we first met. For those who have been lucky enough to meet Laki, they would all attest to the fact that Laki would embrace strangers with the same delight and love as he would a long-lost friend.  There was of course, significant trepidation on my part to meet the great Laki at the time, especially with a bunch of misfits who were trying to fake it till we made it (we still are). When we first met him, Laki invited all of us in to his studio, and even offered us a drink from a bottle of gin which he kept neatly tucked close to his feet, and I was lucky enough to make a gin & tonic under his watchful eye, over and above a large painting he was completing at the time.

What struck me about Laki in the first few moments with him was the fact that this old man had more wonder and delight in his eyes, than most kids I knew. This wonder in Laki never left him, even in his last days. Laki was always working on new projects, discovering things and continuously wanting to contribute to the happiness of close associates. He could see wonder in everything, from the trees to the wind which blew around him. This to me was one of the greatest gifts that he ever imparted on me, to see beauty and wonder around me. And to instill a desire to discover and get more out of life, as it is way too easy to get used to a routine and wonder through life, with no wonder at all. He had a great deal of cheekiness around him as well, he plotted for a very long time to have his ‘erotic art’, which was erotic, but not truly in ones face to made up to billboards around the city to see if he could get away with it, and to ‘fool’ the authorities. There was always a sense of satisfaction in his face when he told us about this plan of his.  I am still trying to be ‘cheeky’ but with little success compared to him.

Laki’s other great lesson in life is of course in the realm of his pursuit of happiness. Not as a destination in itself, but rather as a state of being. This can be seen not only in his lifestyle, but also in his work. As someone who collects art, and speaks to artists, I have been conditioned to generally inquire what a piece of art ‘means’ to the artist. When I first posed this question to Laki, he replied, “ Well child, it could be anything you want it to be, I don’t think so much about it. I draw what comes to my mind.”  This to me, is not only a modest view on his work, but encapsulated his philosophy on life. Happiness is a state of being, not a destination.

Perhaps Laki’s greatest quality was his investment in the people around him. With no real ‘effort’ at all, he did what’s best possible to make the lives of others simply better. In order to do this, he used his talent as an artisan, kindness and understanding. In doing so no one to him was too smart or dumb, no one was too talented to receive this gift of him. Everyone in his eyes had the same chance to create, to enjoy and to pursue happiness. This made the lives of the people around him truly beautiful.

I am so thankful for the time I got to spend getting to know Laki, and I will truly miss him. I will try to impart on others what he imparted on me through his exemplary living. By losing Laki, Sri Lanka has lost one of its greatest souls, but in the time he had, he made an absolute difference to its inhabitants. His was a life well lived.

If someone is interested to know more about his work, you can find his writings, paintings, sculptures and much more here: https://lakisenanayake.com/