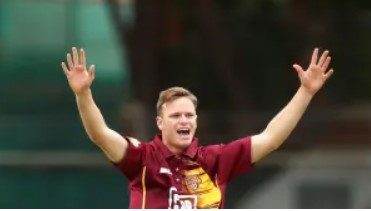 Where Sri Lanka’s pulsating win on Sunday 20th June seemed on the cards as the game moved on towards a climax with Sri Lanka’s batsmen in command, the match on the same grounds at Khettarama in Colombo on Tuesday the 22nd was a nailbiter in the last over. The unlikely near-hero for Australia was their last-minute spinning stand-in Matthew Kuhnemann.

Facing the last over with the enormous target of 19 runs to snatch a win, he manufactured an assault on Dasun Shanaka’s bowling which left him with a target of six runs to secure a tie in the sixth ball of the over. He went for it ; but skied …. and every Sri Lankan breathed a sigh of relief as Asalanka caught it.

The most relieved would have been the bowler and captain Dasun Shanaka: a batting hero at Pallekeley earlier in the series, his decision to bowl the last over  instead of the other options available was under question in the face of Kuhnemann’s remarkable assault.

It was, truly, a magnificent match with many notable performances on both sides: with Dave Warner standing out for Australia and Dhananjaya de Silva and Charitha Asalanka heading the cast for Sri Lanka ….while Jeffrey Vandersay and Chamika Karunaratne providing significant supporting roles as bowlers.

EXTRA! EXTRA!  ….A POSTSRIPT from Errol Fernando in Melbourne via a NOTE to Sunil Perera:sunilp1943@gmail.com>

Apart from giving my ‘Man of the Match’ to a batsman or bowler, Sunil, I have also over the years given it to the umpire, third umpire, groundsman, coach, selector or sports psychologist. Sometimes even to the player’s wife, the Woman of the Match. Recently, in the Lord’s Test, I gave it to the ball because it was the actual change of ball that enabled England to beat New Zealand.

Yesterday, in the series-deciding  game at Colombo there were contenders such as Asalanka who were more than worthy of Man Of Match. However, my winners were  the spectators. They were wonderful   –   passionate, ecstatic, deliriously happy and an inspiration to the players.

Fantastic achievement from Sri Lanka to win the series.  Nice to finish with a 4-1 result tomorrow. …………. All the best,