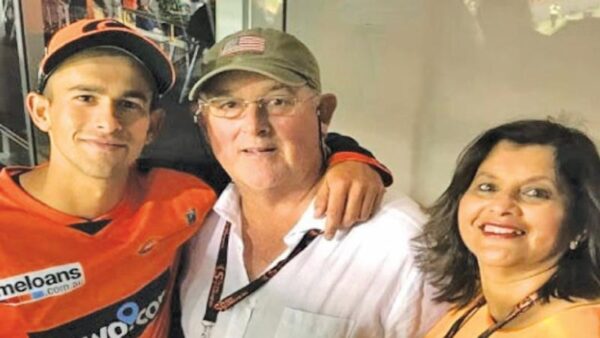 Ashton Agar, currently touring Sri Lanka with the Australian cricket team, visited the residence of his maternal grandfather in Kandy and recalled memories of relatives living in the island.

Agar’s mother Sonia is the daughter of Nala Hewawissa who played cricket for Dharmaraja College. Sonia migrated to Australia in 1974 and later married John Agar.

Ashton Agar, a left arm spin bowler played against Sri Lanka in the three-match T20 series and was injured with a side tear that has ruled him out of the current five-match match ODI series which is tied at 1-1.

But Agar took time off while the team was in Pallekele to visit the residence of his maternal grandfather.

“I am very happy to be here in Sri Lanka. My grandfather was born here in Kandy and I visited his home the other day. To be here and feel connected is very special,” said Agar.

He made no secret of his liking for Sri Lankan food and encouraged his team-mates to go in for hoppers when they first arrived.

“I love the hoppers. As soon as we got to Colombo (where the team first arrived) I was telling the boys you got to eat the egg hoppers and string hoppers,” said Agar.

Agar said he was impressed with the Sri Lankan cricket followers and their patronage of the matches and was looking forward to recovering from his injury and playing in the second and final cricket Test in Galle three weeks from now.