As Sri Lanka’s economic crisis worsens, Australians are desperate to get family over for ‘a bit of relief’ – By Annika Burgess 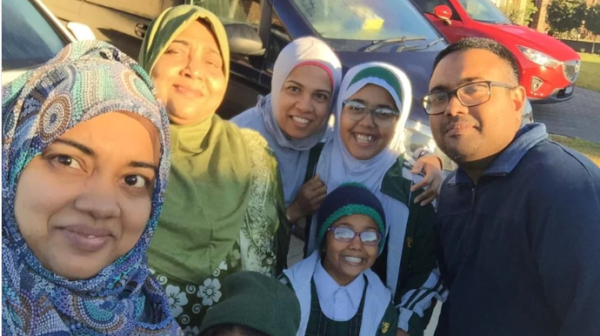 Rizan Rizvi (right) has brought his sister (far left) and his mum (back left) to Sydney for three months to get some relief from the crisis in Sri Lanka. (Supplied)

Power outages for six to eight hours a day, waiting in queues for several hours for groceries, petrol and medicine – hoping there will be enough supply at the end of the line.

This is what everyday life looks like for Rizan Rizvi’s family in Sri Lanka as the country faces its worst economic crisis in more than 70 years.

Mr Rizvi told the ABC Sri Lankans in Australia had been limited in what they could do to support family due to COVID-19 border closures, but now a “recent trend” had emerged.

“Given the current situation in Sri Lanka, we need some quick interim solutions,” he said.

Getting permanent visas for family members is a lengthy and difficult process, so many people are trying to give loved ones “a bit of relief” on visitor visas. These can range from three to 12 months.

“[It’s] the only option that is available,” Mr Rizvi said. 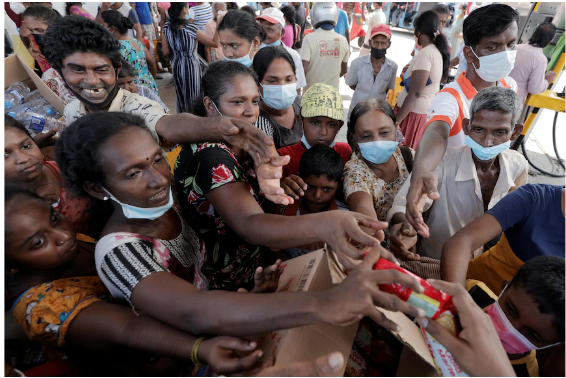 People are given packets of biscuits while waiting in line to buy petrol in the capital Colombo amid the country’s economic crisis.(Reuters: Dinuka Liyanawatte)

It’s the first time they have seen each other since before the pandemic.

“It was quite emotional meeting them in person,” he said.

“But I was much more relieved to see them being able to enjoy their normal day-to-day life without any power cuts.”

The country was plunged into crisis over a year ago and recently shortages of basic supplies have become critical.

There has been unrest in the streets and anti-government protests have turned violent, leading to a state of emergency to be declared last month.

The UN has warned the Indian Ocean nation of 22 million people is spiralling towards a “humanitarian emergency”.

Mr Rizvi, who has been living in Australia as a skilled migrant for 18 years, has had family visit several times.

But this year, it took nearly five months for the visitor visas to be approved and they were only granted for three months.

Under the current circumstances, he would like to see “some sort of special program”.

“It’s not sustainable to keep bringing your family on short stays given the fact that flights and visa applications are not cheap,” he said.

He wants the government to consider longer stays during this period so Sri Lankans in Australia can be with their families and offer support.

Visitor visas are generally granted for a three-month stay at any one time.

For six or 12 months to be granted, the Department of Home Affairs needs to be satisfied that an applicant genuinely intends to stay temporarily in Australia and has sufficient funds to support a longer stay.

Ubaidur Rahmaan Mahmood is “very nervous” about trying to bring his 79-year-old mum to Australia when the weather in Sri Lanka gets cooler.

She is living alone in Kandy, the country’s second-largest city, and is worried about dwindling food supplies.

“She is scared, she’s thinking about food in the future,” Mr Mahmood told the ABC.

“You can only keep rice for one month then it goes bad … and then there’s no cooking gas. They can’t go on just using firewood all the time.” 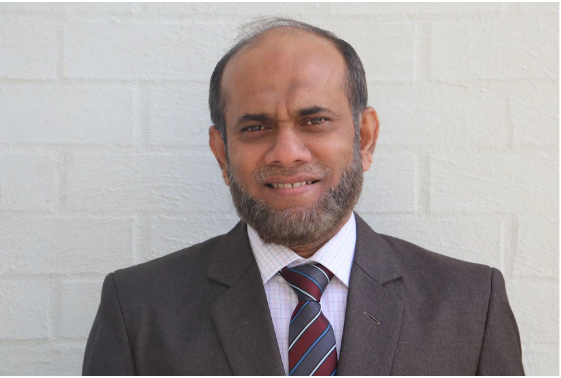 Ubaidur Rahmaan Mahmood wants to ensure his mum can stay in Australia for longer than three months.(Supplied)

Mr Mahmood, who has been living in Australia since 1991, has no intention of trying to relocate his family.

He has the finances and accommodation to support family during their visit and wants the assurance they can stay longer than three months as the crisis worsens.

“We have no plan for them to stay longer,” Mr Mahmood said.

“Even if they could stay, they won’t. They are used to having their own life there.”

Tamil community struggles to be reunited with family

Durga Owen, a Tamil community member and former Labor candidate, said there were Sri Lankans who had struggled to bring family members to Australia for several years.

“If you’re a Tamil person, it’s very hard to come to Australia or bring your family here on a visitor visa,” she told the ABC.

Thousands of Tamil refugees who came to Australia by boat after the alleged genocide in 2009 are still on bridging visas.

They have no way of being reunited with family, Ms Owen said.

“And for the rest of us Tamils who came as refugees and are citizens now, we haven’t been able to bring our families here easily on visitor visas as they are rarely granted,” she said.

“The Australian government thinks that because Tamil people are being oppressed in Sri Lanka, if they come here on a visitor visa they’re likely to apply for a protection visa.”

She said it was not something that was outlined by the government, “it’s just a well-known thing”.

“We have some organisations like temples that have been able to bring in musicians for a particular festival for a couple of weeks, but then they will have to leave straightaway.”

When asked about the difficulties the Tamil community faces in applying for visitor visas, the Department of Home Affairs pointed to the government’s individual assessment process.

It’s decided on a case by case scenario that could result in people from the same group ending up with different visa outcomes and timings.

“All non-citizens applying for visas to enter Australia are considered on an individual basis and against legal requirements set out in Australia’s migration legislation, including the requirement to be a genuine temporary entrant,” a department spokesperson said.

More than 300 Sri Lankans have tried to get to Australia in the past few weeks as the country’s economic crisis has worsened.

Ms Owen, who arrived as a refugee more than 20 years ago, not only wants the government to give resolve to the Tamil people on bridging visas, but sees the current crisis as an opportunity to address wider migration issues.

“For the first time in decades, people are coming out onto the streets in Sri Lanka’s capital and other places protesting,” she said.

“This is a great opportunity for a country like ours to influence Sri Lanka to have a stronger democratic system that respects the human rights of Tamils so that they don’t have to flee on a boat.”