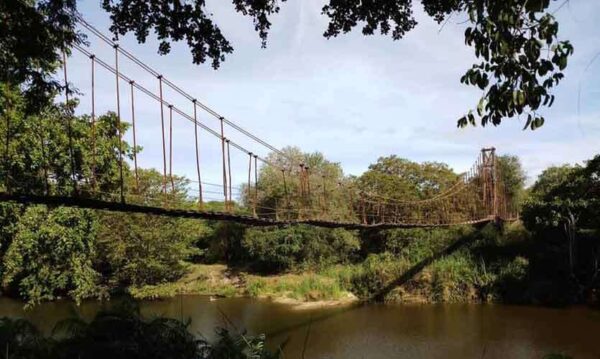 Situated approximately 42 kilometers from Mannar along Medawachchiya -Talaimannar road in Kunchikulam, in close proximity to *Wilpattu National Park, Kunchikulam Suspension Bridge is a hidden tourist attraction in the wilderness. Also known as “Kunchukulam Suspension Bridge”,  Kunchikulam Hanging Bridge or “Kunchikulam Ellena Palama” or “Kunchikulam Sangili Palama” (in Sinhala meaning suspension bridge), the 100 meter long and 1.2 meters wide bridge is held by two strong cables with steel sheets laid across. The Bridge stretches across Malwathu Oya (Oya meaning stream in Sinhala). The Bridge can be seen en route to popular *Madhu Church when traveling from Medawachchiya. There is a small bill board before this road with directions to the hanging bridge.

After traveling approximately 800 meters on this road, there is an ancient Steel Arch Bridge constructed across Yoda Ela, a 13 kilometer long canal built by King Dhatusena (459-477)  which diverts water from Malwathu Oya and feeds Yoda Wewa.

This spectacular Suspension Bridge is a tourist attraction for visitors traveling to Mannar, some exploring other tourist attractions such as Mannar Island, Thanthirimale and *Baobab Tree and some pilgrims visiting Madhu Church. But for locals, this is the only mode of transport during the rainy season.

Constructed in 1935 to cross Aru viaaru in Kunchikulam, the Suspension Bridge is a spectacular steel structure.

According to locals, the old pedestrian hanging bridge in the midst of a jungle trail is the only means of crossing the stream flowing below, especially during the heavy monsoonal floods. Although, there is a motorable causeway bridge several meters away, it is situated at a lower level than the Suspension Bridge and it gets inundated during the rainy season. The floor of the bridge is laid with steel sheets on short wooden beams and some wooden planks seem to have decayed and in certain places, these planks are sloped towards the river. Hence, walking across the Bridge is risky, although villagers walk across it during the rainy season.

A new concrete bridge as well as a “Sapaththu Palama” (Causeway) has been constructed across Malwathu Oya below the Suspension Bridge, making the hanging bridge redundant.

Unknown to the majority, Kunchikulam is a fascinating place. During day time, streets of Kunchikulam are filled with local people going about their day to day life; going to school, collecting water, visiting neighbours and grazing their goats. By night, the streets are taken over by wild elephants, looking for fruits such as banana or wood apple to feast on.