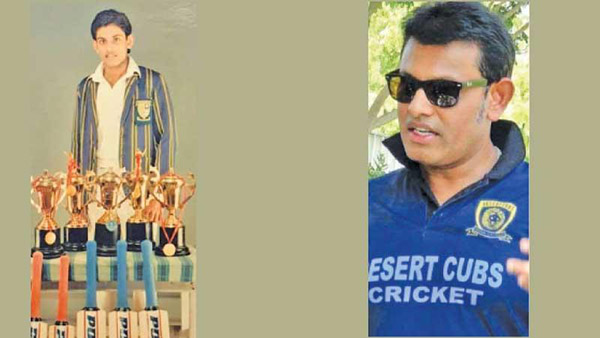 When he won seven awards at two Observer Schoolboy Cricketer of the Year contests-Presley Polonnowita, who is going great guns in Dubai
Source:Sundayobserver

Former BRC captain Presley Polonnowita, who is going great guns in Dubai, would have definitely become the Observer Schoolboy Cricketer of the Year and also take the Best All-rounder award for outstations in 1988, if not for Sanath Jayasuriya of St. Servaitus’ College, Matara deservingly marching towards both feats.

Polonnowita won two awards in 1988, both being runners up to former Sri Lanka captain Jayasuriya. But in 1989, he was called on to the stage on five occasions including the Observer Most Popular Schoolboy Cricketer of the Year Outstation.

Born on December 5, 1970, Polonnowita represented BRC in the domestic premier league tournament and also played six first class matches. He was a fast bowling all-rounder, and played for St Anne’s College, Kurunegala alongside another Kurunegala star Jehan Jaymon for the same school and also at various levels thereafter.

His last match in Sri Lanka was against the Australia Academy side captained by Ricky Ponting in 1994. Just after a week, he flew to the UAE at the age of 24.

“Later, I began a career in coaching and is currently an ACC Level 3 coach,” he said. He also had an opportunity to work as the UAE ‘A’ team coach in 2011 for a series against Pakistan and England.

He was working at Standard Chartered Bank, Colombo and got an opportunity in Dubai at the age of 24 with a lucrative offer to work for a bank and also to play for Lanka Lions, a division one club in the UAE. He played for Lanka Lions for 11 years and also led them to a major title after 15 years.

“I had a short stint as the UAE ‘A’ coach. But due to my commitments with the bank in Dubai and higher studies, I could not continue that,” said Polonniwita who also has a degree in banking and finance.

Polonnowita is the founder and head coach of Desert Cubs Cricket Academy in UAE, the largest club in the Gulf region. This entity has created loads of opportunities for some great former Sri Lanka national and first class players to get into coaching.

“Desert Cubs Cricket Academy has given loads of opportunities to ex-Sri Lanka and club cricketers. Apart from Dubai, we have a branch in Melbourne and have plans to open one in Auckland soon,” he said.

Recalling those glamour days, Polonnowita thanked the Observer Schoolboy Cricketer of the Year contest for giving players a hand to blossom in cricket.

“It was great work by the Sunday Observer to conduct the Schoolboy Cricketer show for 42 years. It is not an easy task. It is a great morale booster for teenagers,” Polonnowita said.

A fast bowling all-rounder who represented the Sri Lanka Under 18 team led by Marvan Atapattu on a tour of England in 1988, he has now made the UAE his second home and heading one of the leading cricket academies in the Gulf

The year 2020 went down in history as the only year in which the Observer-Mobitel School Cricketers of the Year event was not held, that too due to the unavoidable worldwide Covid-19 pandemic.

But the Mega Event due for last year will be held early this year, no sooner the green light is given by the health authorities. Hence, the Observer-Mobitel School Cricketers of the Year will continue to remain the only uninterrupted and the oldest school cricket awards ceremony.

The Observer-Mobitel School Cricketers of the Year contest is considered the Mother of All Battles in Sri Lanka school cricket, commencing from the early days when even the Sri Lanka Schools Cricket Association ever thought of rewarding the outstanding school cricketers.

But the Sunday Observer felt how important it is to reward schoolboys at the end of every strenuous season, long before the school cricket association followed.

There was not even an organized Under-19 first X1 two-day tournament when the Sunday Observer took the lead way back in 1979.

The first-ever Observer Schoolboy Cricketer of the Year, sponsored by Warner-Hudnut Haliborange, was held in 1979 to felicitate the outstanding schoolboy cricketers of the 1978/79 season.

Former Sri Lanka captain and current ICC Chief Match Referee Ranjan Madugalle was the first ever recipient of the glittering Observer Schoolboy Cricketer of the Year award in 1979.

In fact, the Observer Schoolboy Cricketer contest was held in 1978 in Galle with Madugalle as the winner but it is not counted in the series. However, Madugalle was the back to back winner in schoolboy cricketer events held in 1978 and 1979.

From 1980, the Observer Schoolboy Cricketer event was sponsored by the Bata Shoe Company before SLT Mobitel took the baton 13 years ago.

This prestigious event, started way back in 1978/79 and is organized by the Associated Newspapers of Ceylon Limited (ANCL) and sponsored by the country’s national mobile service provider Sri Lanka Telecom Mobitel.

Madugalle, who captained his Alma mater at the centenary Royal-Thomian cricket encounter in 1979, had a wonderful time since then. He was immediately picked to the Sri Lanka team for the World Cup in the same year 1979 and went on to captain his club NCC and Sri Lanka with distinction.

He continued to let his willow to do the talking in the following year too and his superb form won him the title for the second successive year in 1984.

The entry of Mobitel 13 years ago to provide financial support to the oldest Cricket Awards Show in Sri Lanka has undoubtedly lifted the standard of the contest after its humble beginnings way back in 1978/79.

Since then, it has come a long way to set new standards and inspire other media organizations to have similar contests.

Sri Lanka’s flagship English newspaper – the Sunday Observer, understood the need to recognize the raw talent of the country’s schoolboy cricketers at a time when there had been no organized inter-school cricket tournaments, apart from the traditional first XI matches of the so-called leading schools.

Under the directions of the Chairman of Sri Lanka Telecom and SLT Mobitel Rohan Fernando has made a rich contribution towards the success of the event.