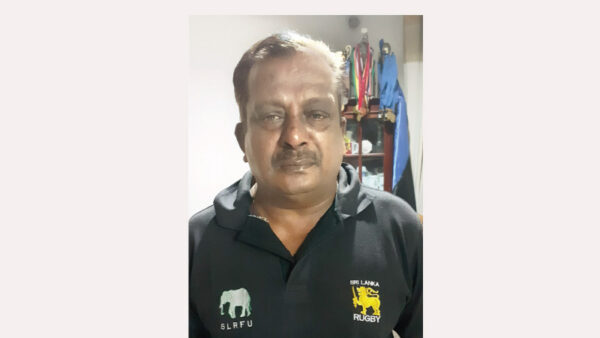 To become a prominent figure in any field, one should possess some extraordinary talent A man who sailed through life in the sporting field from childhood until maturity, contributing immensely to become the cynosure of all eyes, both in Schools, Clubs and the International arena as a top sportsman, was Sisira Henakankanamge, better known as HK, Sisira who was called a five-star player while in school due to his involvement in all major sporting activities.

Sisira Henakankanamage started and ended his academic career at Isipathana College, Colombo. He started his sporting career at the age of ten, engaging in Cricket and Rugby. While being a schoolboy he was mostly involved with his friends in playing rugby using tennis balls or a shoe.

According to HK, Rugby was like a religion at Isipathana, and was the favourite sport amongst most of the children who studied there.

The story behind being named HK is an interesting one.


When he was playing under-12 cricket the Master-in-charge found it difficult to write his name in the score book as it was too long and difficult to pronounce. As a result, he decided to shorten his name to HK, which has ultimately remained unchanged.

From the age of 12 up to senior level he played cricket for his alma mater, and ended up captaining the first eleven team in 1976. With his all-round ability, whilst still a school boy he was invited to play for Colts Cricket Club and went on to be a member of the Rahman Hathy championship winning team under the captaincy of Beverly. Paul. He gradually blossomed and turned out to be one of the dynamic figures in school, where he donned the college jersey in all sporting events, excluding hockey. Along with cricket he also captained the senior college athletic teams, was a Cadet Sergeant and later was appointed head prefect in 1977.

HK’s rugby career started with the under-15 team. At the time he entered the field it was a tough task to find a place in the side, as the whole team was filled with highly skilled players. Nevertheless, HK proved his mettle and became a regular member of the side in 1974, when he was a mere 17-years-old. He recalled that it was his former school coaches Kamal Jayawardena and Dan Ratnam who transformed him into a quality rugby player, and expressed his sincere gratitude to the two of them.

In 1976, when he was vice-captain of the first fifteen team, he established a record in school’s rugby by scoring 25 tries in seven matches in that particular season, which his school mate Hisham Abdeen equalled in eight matches in 1980. Due to his belligerent performance in the season, he was appointed captain. He rates the team under his captaincy as a star-studded

Halfway through his tenure as captain, he got an appointment with Sri Lanka Navy as an officer cadet in 1977. After considering his sporting and academic performance Navy chose him along with another 13 personnel out of 20,000 applicants.

HK says departure from school was due to a very unfortunate incident. When they took on Royal College in their annual rugby

fixture the match was evenly poised with the score reading 12-6 in favour of the visitors. HK got an opportunity to grab the ball and covered 40 metres and almost scored, but was brought down by Susantha Ratnayake just a few yards away from the line due to the crowds shouting and enormous pressure, when victory was within sight if he had scored the try and converted.

After joining the Navy he was based in Trincomalee, but just two days later the management requested HK to come to Welisara immediately. He then joined the rugby team and made his debut against Kandy Sports Club at Galle Face The Sailors won the match comfortably and HK ended up scoring two tries. In his 12-year tenure as a player for Sailors he holds a rare honour of captaining them on four occasions, 1983, 1986, 1987 and 1988, occupying the centre three quarter position. One year after he was recruited, he was sent to India for further training (in 1980) and on his return was asked to rejoin the rugby squad. He also represented the Sailors in cricket for over five years.

He made his international debut in 1982 at the Cathay Pacific Hong Kong sevens under Saman Jayasinghe’s captaincy. From then onwards he was a regular member of the sevens and fifteens teams. In the same year he was chosen to play in the Rugby Asiad held at Singapore under the same skipper. He toured Hong Kong in 1983 to play in the sevens tournament under C.P. Abeygunwardena. Next year he was compelled to dedicate his attention to his job with the outbreak of terrorism, and had to withdraw from the national pool which was preparing to tour Fukuoka, Japan for the 1984 Asiad followed by the Hong Kong sevens. He virtually gave up rugby due to National duties. In 1983 he led the Defence Services team which consisted of 8 from Army, 3 fromNavy and the rest from Air Force, which trounced the touring Blacknell team from UK in Colombo, which game was officiated by the late General Denzil Kobbekaduwa.


HK hung up his boots in 1989 and decided to engage himself in coaching the Navy team from 1990 onwards. In 1993 the Navy administration appointed him Rugby Chairman.

He was then promoted to the rank of Commander of the Navy for his unstinted contribution. Sri Lanka Rugby appointed him as one of the National Selectors under the chairmanship of Lionel Almeida (1996 to 1998) and continued again from1999 to 2000 under Tikiri Marambe.

He prematurely retired from the Navy in April 1998 and devoted his time to his family.

His two sons Navod and Naveen Henakankanamge excelled in sports at S. Thomas’ College, Mount Lavinia. His younger son Naveen followed in the footsteps of his father and has transformed himself to be a top player and donned the National jersey as a school boy, which is a rare achievement. He was awarded the Thomian Blue for rugby for his achievement.