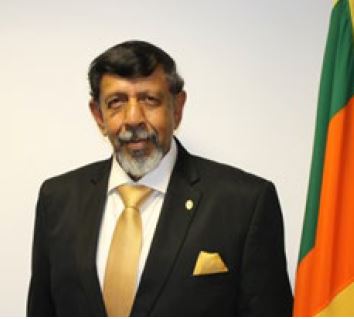 He is a humble , down to earth, unique human being who was grateful for the free education he had first at Royal and then at The University of Ceylon where he read double maths and chemistry. A debt I can never repay

He started his career in 1971 at Whittalls in Estate Management and after three years of outstanding work he was head hunted by George Steuart’s the oldest business firm in Sri Lanka ( Estd 1835 ) where he spent his next 34 years in commercial life rising to be Chairman in 2000. In the next eight years he steered the Group through what history subsequently recorded as the Group’s finest years and retired in 2008 to engage in social work.
As Hony Secretary of The Board of Control for Cricket first from 19 89-92 alongside Ian Pieris as President and then again as Vice Chairman cum Secretary of the first Interim Committee in 1999-2000, where he was privileged to have as colleagues RienzieWijetilleke ( Chairman) and Michael Tissera, SidathWettimuny, Ashantha De Mel and KushilGunasekera he contributed significantly to the outstanding work of that Committee.
His role in the “Skandakumar Report “of 1994 that highlighted the shortcomings in our Nation’s cricket was equally significant and were professionally rectified by visionary President Ana Punchihewa and his team in the ensuing two years that culminated in our winning the world cup at Lahore in 1996.
In a long association with the Tamil Union that began in 1973, as a cricketer, mentor to young cricketers particularly from Galle, and Captain, he played a decisive role in the advancement of the game at the club and in the lives of those outstation cricketers who made the club their second home.
As Club President in the centenary year along with a vibrant committee he initiated the redevelopment of the P.Sara Stadium that was destroyed in the aftermath of the 83 July riots.
This was carried to great heights by succeeding Presidents and their committees.
To cap it all he was appointed as High Commissioner to Australia, in 2015 and returned recently to Sri Lanka having completed a tenure that has been regarded by one and all as an outstanding one by a diplomat overseas.
That’s Somasundaram Skandakumar in a nutshell.
“It was a huge surprise when the then Foreign Minister Mangala Samaraweera whom I had not met before conveyed his intention to appoint me to an overseas posting “
Skanda’s response was “ I am truly honoured Sir but I must be honest with you…I have been retired for seven years ‘ That did not seem to bother the Minister because a couple of months later he received a letter from the Foreign Ministry conveying that the President had recommended his appointment as High Commissioner to Australia.
“The confidence placed in me was overwhelming and I was truly blessed in the personnel that supported me at all levels both at the High Commission in Canberra and in the Consuls General offices in Sydney and Melbourne not to mention the Honorary Consuls in Queensland, Adelaide, Perth and Darwin.’ said Skanda
His management motto which he carried from his term at George Steuarts, was to inspire a culture of confidence through mutual respect and trust and to carry with pride the right to represent one’s country overseas.
In the 70 th year of diplomatic relations with Australia in 2017, Skanda was instrumental in organising the visit of Prime Minister Ranil Wickremasinghe on the invitation of the Australian Government from 13-17 February .That was the first official visit to Australia by a Sri Lankan Prime Minister after more than 60 years. Coincidentally with our national team being in Australia for just two T20 matches around that time Skanda was able to initiate a match at the Canberra Manuka Oval between the Prime Minister’s Eleven and our Team hosted by the Australian Prime Minister Malcolm Turnbull, a tradition normally reserved ONLY for the team on a full tour.
That match was graced by His Excellency the Governor General Sir Peter Cosgrove and his wife in addition to other senior Parliamentarians in addition to another unique happening where the two Prime Ministers went to the centre to toss for the innings flanked by the captains and Cricket Australia officials !
Three months later From 24-26 May 2017, President Maithripala Sirisena, visited Australia on the invitation of the Governor General. This was the first ever State Visit by a Sri Lankan Head of State to Australia, and further re enforced the growing strength of our diplomatic relations.
A joint declaration on enhanced cooperation between Australia and Sri Lanka was signed during the visit which provided future direction for the bilateral relationship.
These visits were reciprocated by official visits to Sri Lanka by Foreign Minister Julie Bishop, in July 2017 and Prime Minister Turnbull in Nov 2017.
The resumption of direct flights to Melbourne by the national carrier strongly lobbied by the High Commission, the celebration of the 150th anniversary of the Tea Industry at Parliament house when both Houses were in attendance and a noble blood donation program by nearly one hundred members of the Sri Lankan community in Canberra rounded off the most eventful year in the history of diplomatic relations between the two countries.” The contribution of our diaspora to the well being of the Australian economy was acknowledged by Prime Minister Turnbull when he hosted our Prime Minister to a packed audience at Parliament House on Valentine’s day to Toast our relationship.

The diaspora gave the High Commission and our consular offices and Hony Consuls excellent support throughout my tenure and were a source of pride to us excelling as state governors , state parliamentarians ,professionals ,businessmen , bankers, IT specialists etc, and in the culinary and performing arts.
Yet I could not help but regret the talent our Nation had lost ‘’ said Skanda.
Loyalty to our beautiful country must be reflected in our allegiance to our national anthem and our national flag he said. The line “Eka Mawakage Daruwo” says it all as do the four bo leaves that border our national flag representing love and compassion.
One hopes that these are a daily rituals in schools in particular where national pride gets instilled.
In conclusion he said that Australia is a fine example of a truly progressive Nation that is home for a surfeit of nationalities for the following reasons;
1) Multicultural and ethnic harmony
2) Mutual respect
3) The inflexible application of the rule of law whereby no one is above it.
The writer takes pride in stating that this was the best interview I have had thus far.