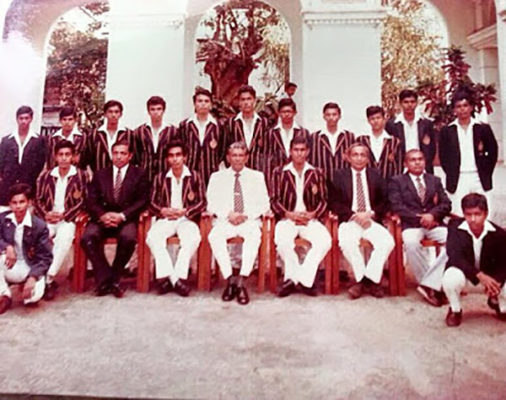 Joel Garner, Colin Croft, Michael Holding, Malcolm Marshall and Andy Roberts. All of them were much-feared fast bowlers. They played together just once, but for most of the 1980s, opposing teams had to contend with four or three of them and even then there were others as fearsome who would be asked to step up and would deliver. In fact the West Indies had a reliable pace battery into the mid 1990s which included Curtly Ambrose, Courtney Walsh, Patrick Patterson, Ian Bishop and Winston Benjamin.

Today, there’s talk of England’s current pace quartet (Chris Broad, James Anderson, Chris Woakes and Jofra Archer) being the best attacked produced by that country in quite a while. It’s not fair to compare players of different eras and it’s not possible to count and compare the butterflies that worried the tummies of batsmen who had to face such bowlers. Let’s leave aside comparisons. Let’s talk butterflies.

It’s all about pressure. The particular batsman’s form, general level of confidence, track-record against a particular bowler or bowling attack, the match situation all come into play.

My column-muse Sarath Weerakoon sent a note about pressure recently.

‘The pressure you face in games is simply nothing compared to the pressure some other people have to face. For example, the pressure that a  frontline soldier faces  from an enemy attack is a [far more] nerve- wracking experience than  a cricketer faces. Having a perspective like this can help you perform better under pressure.’

You can tell yourself anything to sort out nerves, but in the end you have to face the music, so to speak. Sometimes you are ready, sometimes not. Sometimes you can use the Weerakoon Method, if you will, but sometimes you just don’t have the time. Graham Lawrence, for example, didn’t have time to philosophize or prep himself up at the 105th Battle of the Blues. Now Graham was Royal’s opening bowler. He could bat, but he was certainly not a one-down bat or a (virtual) opener that circumstances forced him to be.

Royal had a tough time from the get go. His opening partner, Inam Cassim injured his back bowling the very first over. St Thomas’, led by Sidat Samarakkody, went on to declare at 236 for 8 about an hour before close of play.

‘Clearly our strategy was one of surviving the anxious hour in fading light. Viraj Perera got out for a duck and I was sent in as a nightwatchman with clear instructions to stay there with Nurendra Perera, the other opener,’ Graham reminisced a few years ago.

Kaushik Amalean and Mohanna Marzook weren’t anything like the aforementioned Windies greats but neither was Graham a Graham Gooch, Allan Border, Dilip Vengsarkar or David Boon. Amalean and Marzoon weren’t anything like Broad and Co., but neither was Graham a Kraigg Brathwaite, Shamarh Brooks, Ralston Chase or Jermaine Blackwood.

‘I was petrified! Balls were whizzing past my ear, although to everyone’s surprise I hooked a short delivery for Kaushik for four! Anyway, I had a job to do and we managed to survive until the close,’ he said.

His determination was of course acknowledged and praised. Naturally, he was asked to deliver more of the same the following morning. He did negotiate the early swing at the SSC for an hour or so.

Again, he was a virtual opener, since Viraj got his second duck of the game. Again he did the needful — solid blocking, intelligent leaving and regardless of how he had responded, showing off a healthy strut to demonstrate defiance.

The match was drawn, thanks to great fight from the tail, particularly by Nalinda Premachandra and the b

Graham says that Inam had his pads on, ‘just in case’ and was ready to go out and do his best, but admits ‘it was essentially the laaby of that side, Chandana Jayakody. The score read 135 for 8 at the end.st pair out there…’ Royal saved the match and some of the credit should go to this bowling allrounder who was called upon to do something he had never done all season. He was petrified, but didn’t show it.

Circumstances are not always ideal and often it is in absolutely unfavorable situations that one is called upon to make a stand. There’s no time to complain. No time to count or worry about butterflies. In the end you have to deliver out there where the battle takes place. And you have to leave it all there too. As Graham Lawrence did.