Engulfed in mist during early mornings and late evenings, a picture of surrealism, a precipitous drop and breathtaking vistas, Ambuluwawa Biodiversity Complex is an icon looming in the distance when viewed from *Gampola town… At the summit of the stupa, the landscape unfolds below until the white cloak of the veiled mist creeps surreptitiously engulfing the surroundings into oblivion similar to a picture postcard…

Ambuluwawa Peak is situated in the center of former Gampola Kingdom approximately 25 kilometers from Kandy City on an area of 327 acres (approximately 132 hectares). It is a landmark of Gampola, former kingdom of King Bhuwanekabahu IV (1341-1357 AD) who ruled Gampola Kingdom. Gampola is entrenched in history and endowed with nature and biodiversity as well as a mild climate. Ambuluwawa Biodiversity Complex, the first multi-religious complex in Sri Lanka is a blend of nature and human creation and can be seen from many places in Gampola town.

The standing Buddha Statue, the 48-meter stupa (dagoba) with a spiral stairway extending up and along the exterior of the stupa with doorways opening out to small viewing decks (with a viewing deck on each level) with great depths of vistas that can be viewed along its ascent and the stairs emerging outward at the end of the climb are the greatest attractions of the Biodiversity Complex. At the peak, Gampola town can be seen in miniature form. The design of the stupa is a derivation of the traditional Sri Lankan wee bissa (granary). 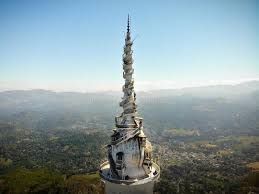 There are also many places of interest in the biodiversity complex such as Kuttam Pokuna (twin ponds) similar to those in Anuradhapura*. There is also a seated Buddha statue about ten feet (approximately three meters) tall which can be seen from far as well as a brass icon of the Buddha with a row of wooden shrines for deities hoisted on posts and a pirith mandapaya (structure for chanting *pirith) endow the serene landscape, forming a spiritual medley.. The signboard at the entrance to the Biodiversity Complex and Religions Centre has symbols of all four religions, a spiritual diversity, the only place in Sri Lanka where there are symbols of all four religions in one place.

“When the planets and stars disappear from the sky and when the nectar appears in or drops from flowers on tree tops and when the sun spreads its rays as it rises over the mountain of the east, you may set off from Ambulwakada happily’  (Mayura Sandeshaya, verse 25).

Ambuluwawa is popular among tourists as there is a unique spectacular structure which resembles a spiraling cone that houses Sri Lanka’s first multi-religious center as well as the Biodiversity Complex.

There is a Bo tree at the Biodiversity Complex, grown from the appendage of the Sacred Sri Maha Bodhi at Anuradhapura.

Among the other attractions of the Complex, there are walking trails, herbal gardens, twin-ponds, water parks and stone gardens, unique features.

There are also experimental plantations and gardens in the Biodiversity Complex, a fine example of a new boom in of agro economics. The International Conference Hall on Agronomy is equipped with state of the art equipment to conduct conferences.

The area above the artificial lakes in the forest is inhabited with deer (Axis axis ceylonensis) and sambar (Rusa unicolor unicolor) as well as several endemic birds and mammals.

The roads at the Biodiversity Complex with cliffs and sharp drops leave an unforgettable memory for travelers.

Apart from historical and cultural sites, Ambulawawa has an international-level conference hall, as well as a Center for Agrarian Research.  As such, many experiments with regard to the diversity of vegetation are carried out at the Complex.

Ambuluwawa is a unique rock mountain in Sri Lanka as it is made up of a special type of rock known as “Inselberg” which is least subject to erosion caused by natural environmental causes. The soil at Ambuluwawa is reddish brown and belongs to latezoic type. There are about 200 varieties of plants which belong to 80 plant families at the Biodiversity Complex.

As the panoramic views from the Biodiversity Complex are breathtaking visitors spend several hours in the location basking in the glory of the vistas.

Although, there are modern developments at the Biodiversity Complex, visitors pay special attention to preserve its natural resources.

Directions: From Gampola town, travel along Nidahas Mawatha, accessed by the Station Road with a gradual ascent with views of Gampola town and *Mahaweli River in the distance. 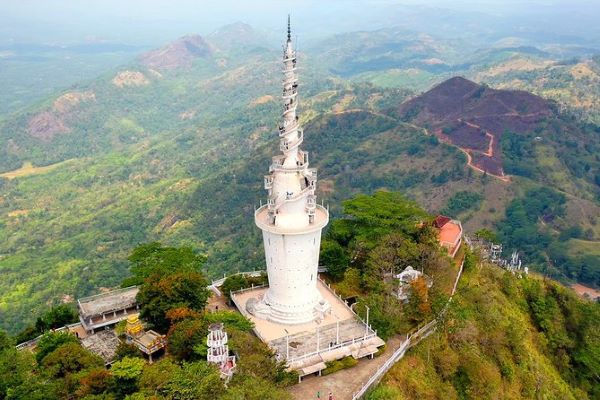