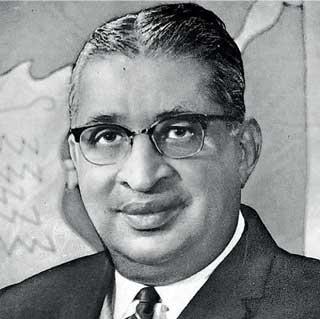 History does not provide us with answers to all todays or tomorrows questions; but it definitely provides us with options to answers to these questions if looked at carefully. I am indeed pleased to associated with the 110th Birth Anniversary celebrations of Hon. Dudley Senanayake – One of Ceylon’s greatest Sons and one of the nation’s most eminent liberal thinkers of the 20th century. His life and political conduct stand out as a beacon of light through history and is worthy of emulation to generations beyond his.

June 19th 1911 was Poson Poya Day, an extremely auspicious day for Sri Lankan Buddhist. As it happened Don Sapter Senanayake, Dudley’s grandfather had pre-arranged to gift land to build the Senanayake Mudalindaramaya Temple in Ambepussa. While the land gifting ceremony was going on in Ambepussa in the presence of Don Sapter and his Son D. S. Senanyake, a messenger from Botale arrived, who informed D. S.Senanayake that he was blessed with a Son. Thus Dudley the 2nd Prime Minster of independent Ceylon who went on to hold the post on 4 more occasions was born on this auspicious day.

Dudley as he was fondly referred to and remembered as, had a very infectious laugh and loved his photography, wildlife, golf and of course food. He was a truly well-rounded personality from his school days at St Thomas College, His University days at Cambridge and his subsequent political life.

Often seen with pipe in hand and camera round his neck in his early days he contributed immensely towards the development of the agriculture economy of our rural masses. His true love were the villagers of Ceylon. The spontaneous outpouring of grief by his fellow countrymen at his funeral on the 21st of April 1973 will never be replicable. The deep sorrow felt by the entire nation at that time cannot be conveyed to today’s generations in terms of emotion but the numbers who attended his funeral very simply staggering. His mortal remains were kept at his residence from 13th to 18th April and he lay in State in Parliament from 18th to the 21st of April 1973.

Throughout this entire period 24 hours a day people of all walks of life from all corners of the country kept on coming dressed in white to pay their last respects to their beloved leader. The ‘Lankadeepa’ of 18th April 1973 reported that on average 175 people passed his body every minute. The journey of 6 kilometres from the Old Parliament building to Independence square where his cremation took place took Two and a half hours to cover due to the hundreds of thousands who thronged the funeral route to pay their respects. Dudley was relatively young 62 years when he passed away.

Dudley’s grandfather had pre-arranged to gift land to build the Senanayake Mudalindaramaya Temple in Ambepussa. While the land gifting ceremony was going on in Ambepussa in the presence of Don Sapter and his Son D. S. Senanyake, a messenger from Botale arrived, who informed D. S.Senanayake that he was blessed with a Son.

What made Dudley such a beloved politician who his biography accurately titles as THE MOST LOVED LEADeR OF OUR TIMES?
Dudley who was a lawyer by training quickly became disillusioned with the legal field. In 1936, after much persuasion by family members, elders, and friends, he reluctantly agreed to enter politics. He successfully contested the Dedigama electorate and became the youngest member of the 2nd state Council at the age of 25 years. An examination of his conduct within the State Council of that time documents Dudley’s impeccable conduct as a true democrat. Throughout his long political career, he stayed with the principle of ‘fairness’, and time and again defended friend and foe alike.

In today’s polarized political world Dudley’s concept of ‘One Country-One Nation’ was visionary concept, which accepted the right of every community. He was a genuine political friend of all communities. He dedicated his political career to bring understanding and amity among all communities in Ceylon. He fought hard against communalism irrespective of whether it emanated either from the majority or minority communities. A lesson for us all today.

I must mention Dudley’s stance on the famous ‘50-50 Demand’ put forth by Hon. G.G. Ponnambalam, Member for Point Pedro, speaking on behalf of the Tamil Community during the Constitutional Reforms debate in the State Council. Dudley rejected this communal stance taken by this minority leader and reminded the country of the futility of communal creed and warned against the dangers of communal representation.

While his father was Prime Minister, Dudley Senanayake at age 37 years served in the Cabinet as Agriculture and lands Minister. For several years, he developed Sri Lanka’s irrigation infrastructure and agricultural capacity. In his first year, Dudley Senanayake began the Gal Oya Project, the country’s first multipurpose dam, which would eventually make some 120,000 acres of land arable. This in my opinion is his greatest achievement.

After his father died unexpectedly in 1952, Dudley Senanayake at age 41 years was chosen as the new Prime Minister thus becoming the youngest Prime Minster of the Commonwealth at the time. The younger Senanayake was said to be reluctant to take on this prestigious position with the condition that he must dissolve Parliament and get a mandate from the people. Dudley Senanayake was sworn in as Ceylon’s 2nd Prime Minister on 26th March 1952. 13 days later he dissolved Parliament seeking a fresh mandate from the people. Such was his commitment to democracy. He won the 1952 Parliamentary election gaining a 2/3 majority for the first time in Parliamentary history in Ceylon. Among the things which contributed to this resounding victory in particular were, the increasing of welfare benefits and the rice subsidy.

His acquiescence, however, did not last for long: the next year, the price of rice rose, and subsidies were cut, creating wide dissatisfaction with the UNP. The Political protest to this move was explosive. A general strike, known as “Hartal”, was launched by very strong trade unions affiliated to the left-wing parties. The lives lost in the 1953 Hartal caused him shock and grief and Senanayake resigned, due to health reasons, or, as some speculate, out of grief for the deaths that were caused by the Hartal that year.

Senanayake re-entered the political fray during the tumultuous years during and after the assassination of S.W.R.D. Bandaranaike in 1959. A general election was called in March 1960, after which Senanayake held his second term as Prime Minister, serving for only four months.

Dudley Senanayake maintained the position of Opposition leader until 1965, when he was able to form a government following that year’s elections. He served his longest term as Prime Minister between March 1965 and May 1970. During his final tenure as Prime Minister, one act which leads history to view Dudley Senanayake as tolerant was elevating the Tamil language to official status in the Tamil-speaking areas. This came after S.W.R.D. Bandaranaike replaced English with Sinhala as the official language of Sri Lanka. Dudley Senanayake did so against the wishes and grumblings of his own party, and, calling for an end to ethnic animosities, he said, “I will not barter the rights of any community for the glory of political office.” He established universities and colleges, implemented educational reforms, and even established the Poya holiday in Sri Lanka. However, he lost the general elections in ‘70 and virtually retired from politics thereafter.

He was involved in party affairs in the period 1970 to 1973 until his demise. He was intimately involved in seeking justice and compensation for the victims of political violence which took place after the election in 1970 against UNP supporters. During the 1971 insurgency Dudley as the leader of the UNP took part in preparing a statement in support of the government. The statement was read out in Parliament by the leader of the Opposition J. R. Jayawardene. On 22nd May 1972 the Government of Mrs. Sirimavo Bandaranaike introduced a new Constitution replacing the Soulbury Constitution which was in existence since 1947. Dudley while agreeing in principle on the necessity of a Republican constitution outlined the flaws and imminent dangers of the proposed draft. He also maintained that such an important step must receive wide consultation by the public and lamented the absence of it.  The period 1970-1973-brought forth political difference between him and other leaders of the UNP at the time. Though he had political differences with his colleagues he was able to maintain the best of personal friendships with all of them.

He delivered his last speech to Parliament on 8th March 1973. He spoke on a no-confidence motion against the government, where he accused it of betraying the people and predicted that the government was in for a rude shock as the masses were turning away from them. True to his words at the General election of 1977 his party the UNP which he so ably had led in opposition received an unprecedented victory capturing 5/6th majority in Parliament.

His demise on 13th April 1973 shocked the country and plunged it into a period of genuine grief and heartfelt mourning of a dearly beloved leader.

I end by quoting from the Hansard of Parliament in which J. R. Jayawardene and Gamini Dissanayake paid tribute to their departed leader;

Gamini Dissanayake “Mr. Dudley Senanayake should be remembered as he really was in life – a simple man with his share of human frailties, minus the airs and props that accompany high position, and a man who by his simple ways constantly reminded us of the truth of the saying, ‘A truly extraordinary man is in the final analysis a truly ordinary man: The iron heel of totalitarianism never appealed to him. The arrogance of power was not a part of his constitution. He was a true democrat who only believed in the democratic approach towards the solution of ills. Trade unionists, political opponents, power lobbies and agitators of diverse hues and colours will bear testimony to his spirit of democratic toleration and moderation.”

J.R. Jayewardene: “Here was a colleague who touched the deep sea of reverence in a wider world in our country than possibly any other person in its long history. If a man could draw that affection and goodwill, he has a claim to be known as one of its greatest sons. Good night sweet prince”