Meeyan Ella – spectacular waterfall with a history – By Arundathie Abeysinghe 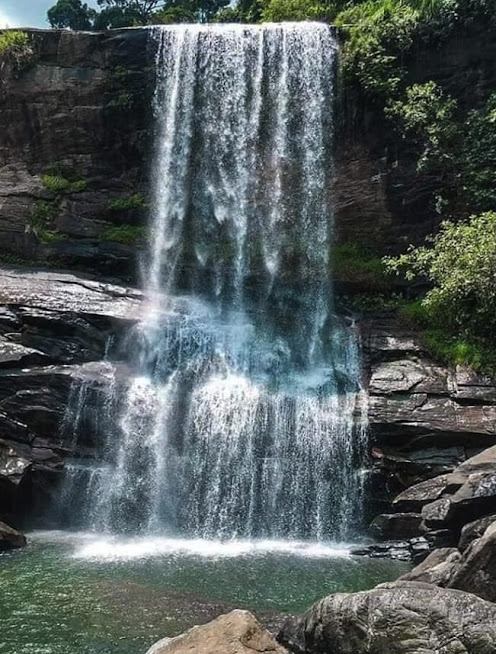 Situated along the up-county railway line in close proximity to *Ihalakotte Railway Station, Meeyan Ella waterfall has a deep history unknown to the majority. The stream that Meeyan Ella waterfall originates is situated in a location known as Helan-Madiththa on the *Alagalla Mountain Range. Initially, the waterfall fell as a single stream over a rock and flowed over the villages of Thalagolla and Walagoda joining Thalagolla Oya (Oya meaning stream in Sinhala) connected to Ma Oya in Boella.

At present, the waterfall drops as two waterfalls with a gap of approximately 50 meters along two artificially cut grooves on the rock surface. There is a history regarding the origin of the two waterfalls from one waterfall.

During the British Colonial Era, a railway line from Colombo to Kandy was constructed by the Colonials to transport goods including tea (*Ceylon Tea) from Kandy for export purposes. The section of the railway line between *Polgahawela and Kandy was constructed during the mid 1800’s. At Alagalla, the Colonials faced a challenging task of constructing the railway across the large waterfall Meeyan Ella. Hence, the Colonials had to construct a tunnel through the Alagalla rock drilling approximately 304 meters (1000 feet) through the rock, a colossal task. Instead, they searched for alternative methods and after surveying the area, they realized that the only alternative was to block the waterfall upstream and cut two deep grooves into the rock, so the water would fall as two smaller waterfalls, instead of one waterfall. Once the task was completed, approximately 426 meters (1400 feet) long and five meter (18 feet) deep horizontal cut along the Alagalla rock to lay the railway line was created which was completed up to Kandy in 1867. During heavy rains, this groove was not sufficient to handle the massive flow of water of the stream and the railway was swept away several times.

The British Colonials called the waterfall “Meen Galla” as it was hard for them to pronounce “Meeyan Ella”. 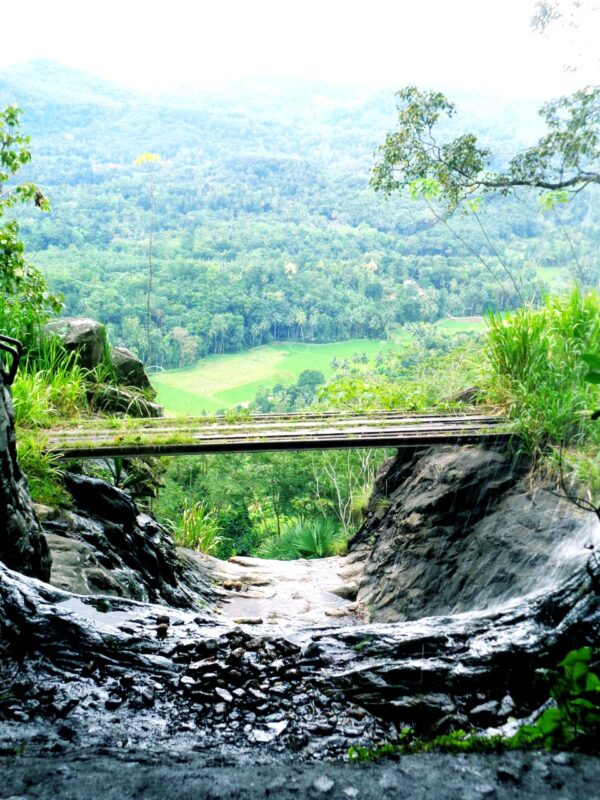 During the 20th century, engineers realized that this groove was similar to a death trap during the rainy season and decided to construct the tunnel as was originally planned. Hence, a 400 meter (1307 feet) long tunnel across the Alagalla rock was constructed during the period 1905-1906. As the newly constructed tunnel was situated between Tunnel 5 and 6, it was named Tunnel 5A, the second longest railway tunnel in Sri Lanka, the longest being Singimale Tunnel (situated between Hatton and Kotagala railway stations) which is 558 meters (1865 feet) long.

To reach the split waterfalls from Ihalakotte Railway Station, it is necessary to travel along the railway line approximately 275 meters and reach Sangaraja Lena (a small cave where *Venerable Welivita Sri Saranankara Thero had lived in hiding learning Pali Language). Thereafter, it is necessary to walk approximately 225 meters along the rail line to reach the entrance of Tunnel 5A. Travelers who wish to explore the tunnel have to consult the railway staff at Ihalakotte Railway Station and find out the latest train schedules as being inside a 400 meter long tunnel and facing a train inside the tunnel could possibly lead to fatal consequences. Usually, the tunnel is damp due to the Meeyan Ella waterfall flowing over it. After passing approximately 75 meters, a large hole on the left wall opens up to a precipice outside. According to folklore, this hole had been utilized to dispose rubble when the tunnel was excavated. At present, this hole provides fresh air for those traveling through the tunnel. Approximately after a few minutes of walk through 5A tunnel, the second tunnel can be reached. The second tunnel is a cave tunnel. According to some travelers, it is “a tunnel inside a tunnel”, an amazing experience…

According to folklore, the coconut tree located at the beginning of the old rail path marks the grave of S.P Appuwa (born in 1880 at Ihalakotte and passed away in 1974) and worked in the workforce that drilled Alagalla Mountain to construct the tunnel and maintained the railway line until his retirement. The banana trees towards left too marks another grave of Gallene Gedhara Samara, a patrolman who worked and passed away while employed in the railway.

It is easier to visit this location for those traveling by train from Kandy to Colombo as the location is situated a short distance from Ihalakotte Railway Station, although the location can be reached in a vehicle too. For those traveling by train: Travel on the upcountry railway line from Kandy to Colombo and reach Ihalakotte Railway Station.

For those traveling by vehicle: Travel up to Mawanella town and thereafter travel approximately five kilometers along Rambukkana road to Ihalakotte Railway Station.