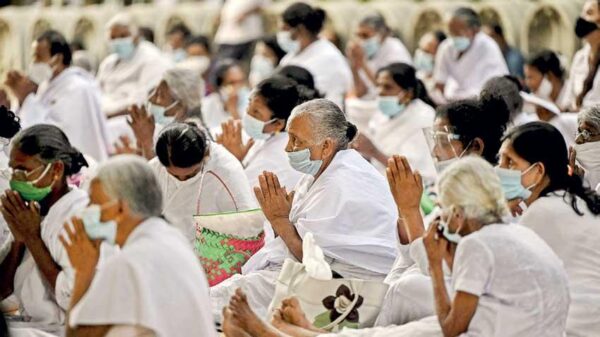 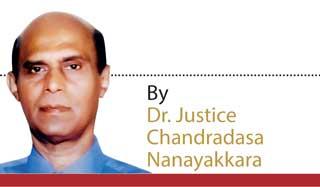 Dukkha (suffering) is an important concept in Buddhism. Life is suffering and this aspect of life is real and almost universal. We live in a world that is full of suffering and sadness; either brought by nature or by ourselves.

The solution for the problem of Dukkha (suffering) in this world is the Noble eightfold path (Ariya-Atthangika-Magga) propounded by the Lord Buddha. It is composed of eight categories or factors.

This path is unique to buddhism and is known as the middle path as it avoids two extremes that is self -indulgence and self- mortification. They are interdependent and interrelated. This path falls into three groups. The first two paths listed in the Eightfold path described above refer to wisdom (panna), the middle three paths relate to virtue or morality (sila) the last three belong to concentration (Samadhi).

Referring to Eightfold path T.W. Rhys Davids, Founding President of the Pali Text Society of London states thus:
“Buddhist or not Buddhist, I have examined every one of the great religious systems of the world, and in none of them found anything to surpass in beauty and comprehensiveness, the Noble Eightfold Path of the Buddha. I am content to shape my life according to that Path.” (Piyadassi Thero).

The Eightfold path which Gautama Buddha prescribed remains as pertinent today as they were more than 25000 years ago.

Lord Buddha realized everyone’s life includes an economic dimension and one has to engage in some kind of employment to sustain himself. That was the reason why he assigned an important place (fifth) to Right Livelihood in the numerical order of the Eightfold path.

As the major part of one’s daily life is taken up by one’s employment, the way one earns his or her livelihood has ethical and social implications either positive or negative.

As far as the Right Livelihood in the Noble Eightfold is concerned, it should be stated that Gautama Buddha has not expatiated much on it, but simply declared that a layman should not pursue certain trades which are considered to be morally and ethically wrong. For this purpose, he listed five trades which he considered to be inimical and harmful to the people and the society. They are trading in poison, trading in weapons, trading in meat, trading in intoxicants and trading in humans {diganikaya}.

However, these forbidden trades are the very trades that have increased phenomenally as a result of the free marketing forces and globalization in the world today.

Although Buddha specifically mentioned these five trades, today there are a large number of trades which could be classified as unrighteous and immoral. When Buddha propounded the Eightfold path society consisted of predominately of farmers, herdsmen, and traders and the country was not developed as it is now and there were not many trades. That was why he confined himself to five trades and declared them to be immoral and unethical.

Had The Buddha lived today the list of forbidden trades would have been vast. Although the list of forbidden trades has increased, fundamental notion underlying Right Livelihood remains the same. That is one should not attempt to improve oneself materially regardless of the moral and ethical basis of economic life. Livelihood based on good moral values leads to happiness and one should be aware of the consequences of the way one earns his living.
The Noble Eightfold path is meant to be practised in one’s daily life as the teaching of the Buddha is more concerned with the practice of dhamma (doctrine) than with the intellectual knowledge.

In the pursuit of one’s livelihood, person should not resort to trickery and dishonest means. Accumulation of wealth through immoral, unrighteous and exploitative means such as marketing of substandard products, harmful substances, misrepresenting the quality of the products selling short weight etc. are widely prevalent in our society today. These practices are not in consonance with the essence encapsulated in the concept of right livelihood and they should be avoided by laymen, as they cause immense pain and suffering, to human beings.

These immoral practices may be materially rewarding and gratifying in the short run, but the consequences of such action will follow just as the wheel follows the hoofprint of the ox that draws the cart.

Therefore, one should make an honest effort to earn a living through righteous means.

In this connection, it should be stated when thousands of people were dying and a large number of people were being thrown out of jobs as result of catastrophic pandemic that gripped the country, some unscrupulous traders and businessmen were making hay while the sun shines by marketing their products and other consumer items at unconscionable and extraordinary prices at the expense of the poor people. Today, many traders and businessmen are acquisitive and materialistic and think primarily in terms of material possessions and very few of them have any real understanding of the way morality works. When people misunderstand the nature of morality, they tend to do all the wrong things, thinking they are doing the right things. This tendency is widely prevalent now. They think that no repercussion will follow from their actions. Consequences of their actions will rebound back to them later in this very life or in some future life.

No doubt, material happiness is necessary for the achievement of spiritual happiness, but it should be achieved on the basis of moral ethical values.

In choosing an occupation too one has to be circumspect as the choice of wrong occupation could impede one’s spiritual growth.

There is another side to right livelihood. One should endeavor to derive happiness by sharing honestly and righteously earned wealth with others particularly deserving impoverished people on the basis of moral and ethical values. Right livelihood is a concept that can be practised both by Buddhists as well as non-Buddhists. In brief one’s means of livelihood should not bring harm and suffering to others.