Stories Behind Names of Places in Sri Lanka: GALEWELA – By Dr. Nimal Sedera

Source :  Sri Lankan Group of Radio 4EB is pleased to present its Newsletter “Dæhæna” for August 2022.

I trust you are enjoying the article series I am writing to Dehena continuously for the last four year or more. I enjoy writing this series as it is so much fun to know the history of our country. 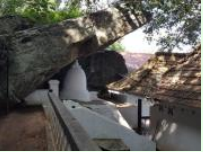 Galewela is in the Central province, in the Matale District, and the Trincomalee A6 road cuts across Galewela. It is 141 Km away from Colombo.

It is a well developed area with a population of over 70,000 people as per the last census of the country. Mostly Sinhala Budddhist people live here with a growing Muslim community of over 10,000.

King Kashyapa not only built Sigiriya he developed the land around the rock palace. His supervision would have been strict over the activities around the rock palace for his safety. The area now known as Galewela in its landscape was more suitable for cultivation. Even today, it is blessed with a natural water belt coming from the mountains
around it. It is said that King Kashyapa took an interest in cultivating paddy in this area. The paddy fields were developed with his supervision and he appointed leaders to guide the agriculture development.

In the centre of this large paddy field there had been a huge flat rock covering a significant area. People identified this rock as “Welegala”, meaning the rock in the paddy field. The legend is that King Kashyapa often visited this paddy cultivation and that he observed and admired the cultivation from this long flat rock which exists to date.

Dr. Nimal Sedera
Dr. Sedera is a journalist, poet, motivational speaker and an author of over 70 books.